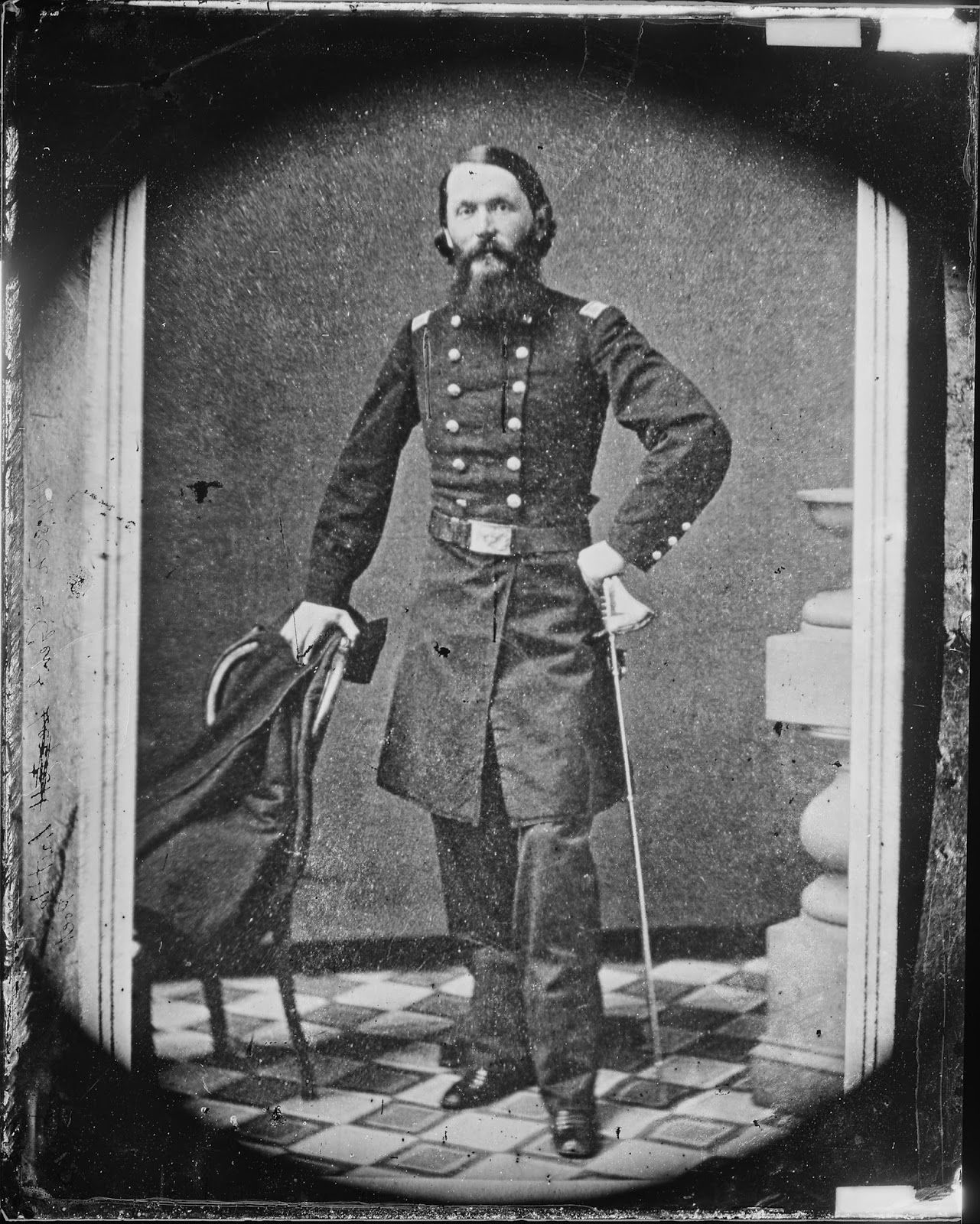 William Haines Lytle, a Union general, poet and lawyer who died on the Chickamauga Battlefield below Chattanooga, is seen in a portrait. 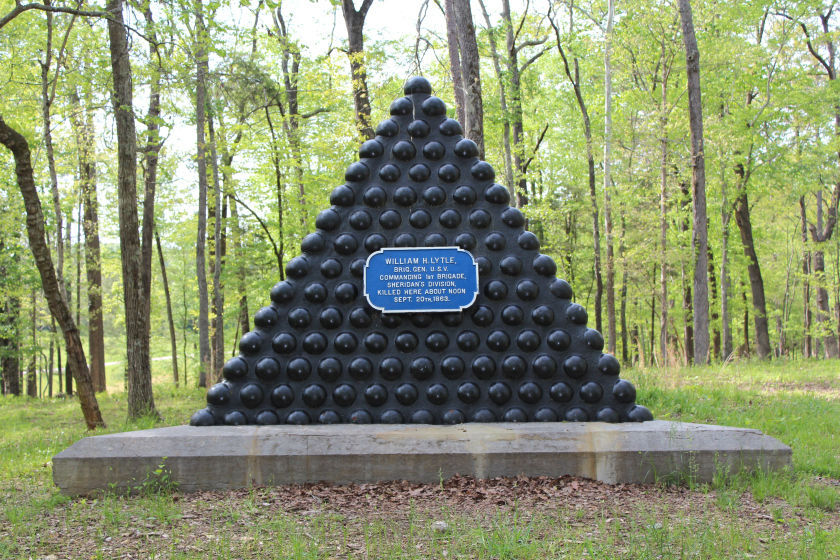 Cannonballs were used to construct a memorial at the place where Brig. Gen. William Haines Lytle died on the Chickamauga Battlefield. 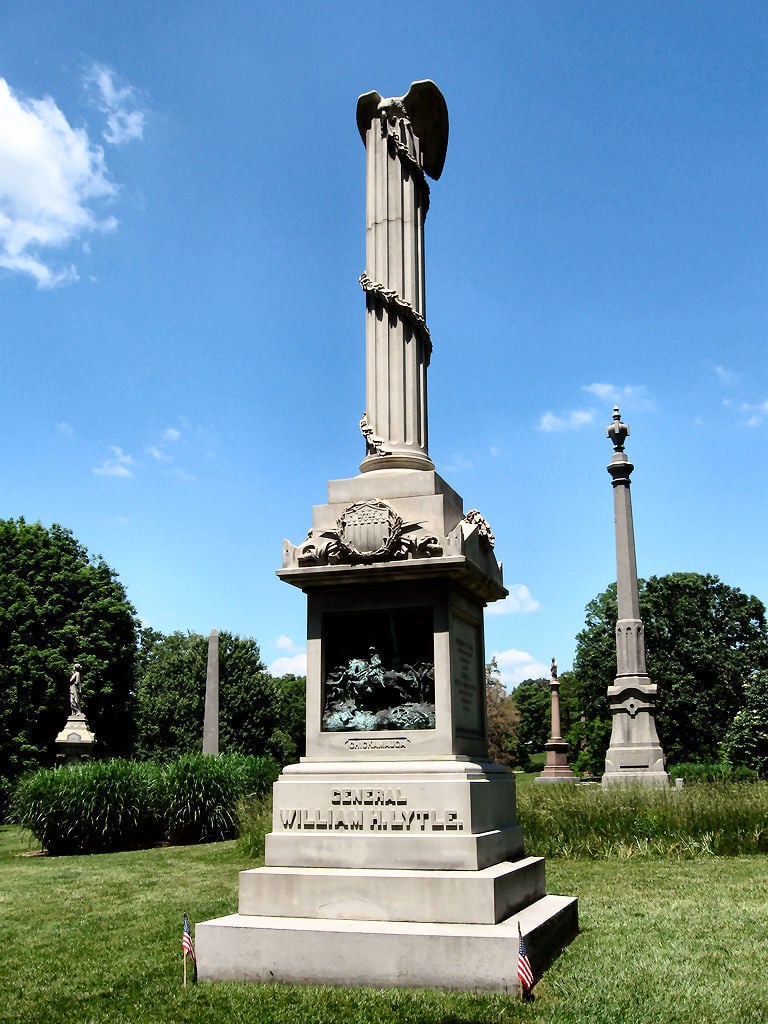 Lytle Park in Cincinnati, Ohio, where William Haines Lytle grew up, is named for the union general. Fort Lytle in Kentucky is also named for him.

William Haines Lytle, a Union general, poet and lawyer who died on the Chickamauga Battlefield below Chattanooga, is seen in a portrait.

Cannonballs were used to construct a memorial at the place where Brig. Gen. William Haines Lytle died on the Chickamauga Battlefield.

Lytle Park in Cincinnati, Ohio, where William Haines Lytle grew up, is named for the union general. Fort Lytle in Kentucky is also named for him.

On the Chickamauga Battlefield below Chattanooga sits a memorial to William Haines Lytle. It is 15 rows of cannon balls stacked in the form of a pyramid. A blue plaque attached identifies him as a Union general commanding a brigade of Ohio troops and reports that he was killed about noon on Sept. 20, 1863.

Lytle is not a household name such as Grant, Sherman, or Burnside. Both sides together had around a 1,000 men wear the stars of a general at some point during the four years of fighting. Some are well known, some are less known, and some nobody has ever heard of.

Lytle, like many, was more popular during his time than he is in ours. When I throw that name out today people are more likely to say, “Didn’t he have a farm up near Tusculum back in the ’30s?” than to identify him as a military man or for that other part of his nature that made him famous in his own time.

Lytle grew up in Cincinnati, Ohio, and was born into a prominent family. He graduated from Cincinnati College and soon earned a law degree. He established a successful law firm where he should have been content with his achievements as a young man in his early 20s.

But as the war with Mexico loomed, he felt the pull of adventure and military service calling. He enlisted in the 2nd Ohio Volunteer Infantry and returned as a captain from the Mexican American War. Following his honorable service, he returned to Cincinnati and enlarged his law practice. He was elected to the Ohio state legislature as a Democrat. He unsuccessfully ran for lieutenant governor in 1857, losing the election by just a few hundred votes.

Military success seemed more welcoming than politics, and Lytle was appointed as a major general in the Ohio State Militia in 1858. In 1860, he unsuccessfully sought the Democratic nomination for his district’s seat in the United States House of Representatives. He campaigned in Ohio for the candidacy of Stephen A. Douglas in the 1860 presidential election.

When the Civil War broke out in 1861, Lytle used his numerous political connections and was commissioned as colonel of the 10th Ohio Infantry. His infantry regiment helped drive the Confederates out of what would become West Virginia, and by September he found himself at home nursing a rifle wound through his calf. Four months later he was back in action and was stationed at Bardstown, Kentucky, training new recruits.

He shortly returned to active duty and found himself again wounded and taken prisoner at Perryville, Kentucky, on Oct. 8, 1862. The Confederates considered him a prize, yet they made sure he was taken care of and soon he was exchanged and back with his Ohio troops.

In November 1862, he was placed under the command of William Rosecrans as commander of the Ohio Volunteers with the rank of brigadier general of volunteers. He led this brigade in numerous engagements in the coming months. He was well respected by his men and fellow officers. He was one that did not ask them to do anything he would not personally lead them into. For that, admiring officers from his old 10th Ohio Volunteer Infantry presented him with a jeweled Maltese cross in September 1863, just eleven days before his death.

During the Battle of Chickamauga while leading a counterattack on horseback, Lytle was struck from his horse, mortally wounded. All that is known is that the shooter was a Confederate sniper who used a Whitworth .45 caliber percussion rifle.

Over 50 years later it was reported the shooter was Hillary Garrison Waldrep of Company B of the 16th Alabama Regiment of Infantry. Waldrep’s shot was reportedly at around 300 yards — an incredible feat. It was reported Waldrep’s shot was approved by top Confederate brass. I find that very doubtful. The Confederate leaders, like their counterparts, had enough to worry about and would not have been concerned who a sharpshooter was taking shots at. With thousands of mini-balls flying through the air like hornets, anyone’s could have hit Lytle.

The Confederates gathered around and tried to bring what comfort they could in the final minutes to their fallen foe. Respecting that he was a general officer, they were shocked to find he was William Haines Lytle. These men did not know what he looked like, but they knew his work. The world knew his work. He was a world-renowned poet.

The Confederates removed his body to a field hospital where it was cleaned as best they could. A guard of honor stood over the remains for the night. Outside, Confederate soldiers read his poetry by campfires. It was out of respect for the fallen foe, a man they knew but did not know, a man brought to their door by the unfortunate fortunes of war. William Haines Lytle, Union general, lawyer, politician, world renowned poet was dead at 36.

The next morning, the Confederates sent a flag of truce to the Union lines. The Confederate honor guard, without flags, respectfully returned Lytle to the Ohio Volunteer Infantry. They marched across the field where the day before men were killing each other and Lytle made his ultimate sacrifice. Men from both sides removed their hats and bowed their heads in respect. Soldier and officer alike shed tears at the sight of the respectful Confederates bearing their fallen leader’s remains.

That evening, Confederate soldiers again recited his poetry around their evening campfires. They may not have known the man but they knew his work. Lytle never married and had no children. He would live on however, for generations, through his poetry.

His funeral was held in the early afternoon at Christ Church on Fourth Street in Cincinnati. So many people lined the streets that the funeral cortege did not reach Spring Grove Cemetery until dusk. Lytle’s monument, one of the most impressive ones there, is near the entrance to the cemetery.

The U.S. government would rename a fort in Kentucky Fort Lytle in his honor. Lytle Park in Cincinnati, One Lytle Place in Cincinnati, and Lytle Street at 1235 West in Chicago, are named for the fallen general. The hill where he fell at Chickamauga is named Lytle Hill and that impressive monument of a soldier’s tools of war, the cannon ball, marks the spot.

I like to tell people how many times I’ve been to certain places. Chickamauga would be number one on the list. It was the first battlefield I visited at age 6. I have been on tours there with several different groups and with some of the nation’s leading historians over the years. I have led tours there on several occasions. I cannot offer a guess as to how many times I’ve been there. I’ve spent days there. I’ve spent a few hours there passing through. I have reenacted the battle on nearby farms in knee-deep mud. It ranks among my favorite places.

In case you haven’t figured it out, my favorite places are usually the ones I’m talking about or writing about at the moment. Historic sites are like books — I haven’t met many I didn’t like. All are unique in their own way and have a story to tell.

When at Chickamauga, I cannot help but stop by the marker for William Haines Lytle. Few today know him or his story. I see him as a poet who answered his country’s call. A lawyer drawn to the service of his country. A player on our nation’s darkest stage. A sacrifice on the altar of war. A martyr in an epic tale. A man whose poetry transcended war and hatred. A man who was larger than all the above and briefly brought it all together in a show of respect and love for a deserving foe. However little known in person, he was respected by what he had done best, applying pen to paper, writing poetry.

A book, “Poems of William Haines Lytle,” was published in 1894. The first poem featured on page 61 is Lytle’s most famous work, the one those soldiers recited around the campfires at Chickamauga. It was not only here on this night, but many nights before they read the words that resonated with them. It was “Antony and Cleopatra,” it was about Rome, but the words fell heavy on them as a reflection not of Rome but of home. It brought Rome to them and took them to Rome for they lived the story every day.

It is fitting to end with Lytle’s masterpiece, the poem that was greater than he. As you read it, imagine yourself a young man, away from home, tired and hungry, uncertain of what tomorrow will bring, aged beyond your years by what you have witnessed. The world you have known around you is crumbling, never to be the same. As you sit warming by a campfire, in the companionship of those who have shared your struggles, the words resonate with the day, with the time. Educated and uneducated alike found warmth in the words. It had meaning to them, as it does for us. That meaning may be different, but Lytle’s work transcends time and place.

I am dying, Egypt, dying!

And the dark Plutonian shadows

Gather on the evening blast;

Listen to the great heart secrets

Thou, and thou alone, must hear.

Though my scarred and veteran legions

Bear their eagles high no more,

And my wrecked and scattered galleys

Though no glittering guards surround me,

Prompt to do their master’s will,

‘Twas no foeman’s arm that felled him,

‘Twas his own that struck the blow —

His who, pillowed on thy bosom,

Turned aside from glory’s ray —

His who, drunk with thy caresses,

Madly threw a world away.

Should the base plebeian rabble

Dare assail my name at Rome,

Where the noble spouse, Octavia,

Weeps within her widowed home,

That her blood, with mine commingled,

Yet shall mount the thrones of kings.

And for thee, star-eyed Egyptian —

Glorious sorceress of the Nile!

Light the path to Stygian horrors

With the splendors of thy smile;

Give the Caesar crowns and arches,

Let his brow the laurel twine,

I can scorn the senate’s triumphs,

I am dying, Egypt, dying;

They are coming; quick, my falchion!

Let me front them ere I die.

Ah, no more amid the battle

Shall my heart exulting swell;