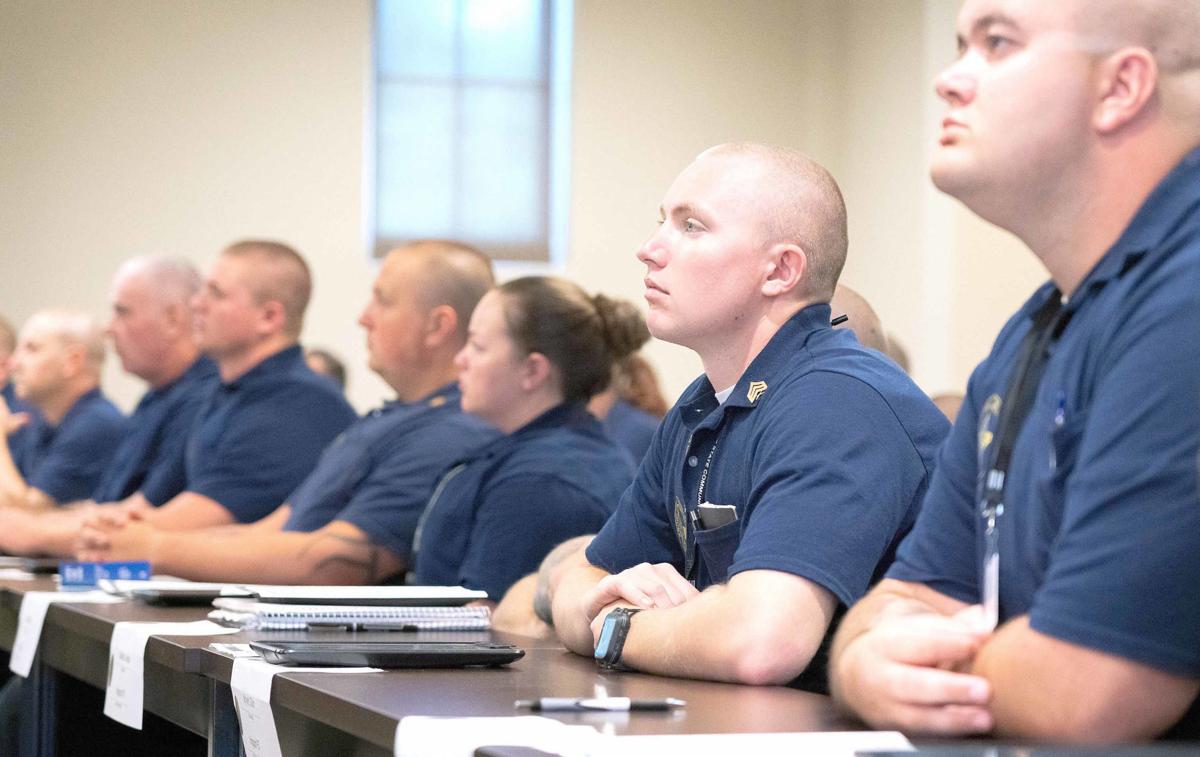 Participants listen intently during in a recent training session at the East Tennessee Regional Law Enforcement Academy at WSCC. 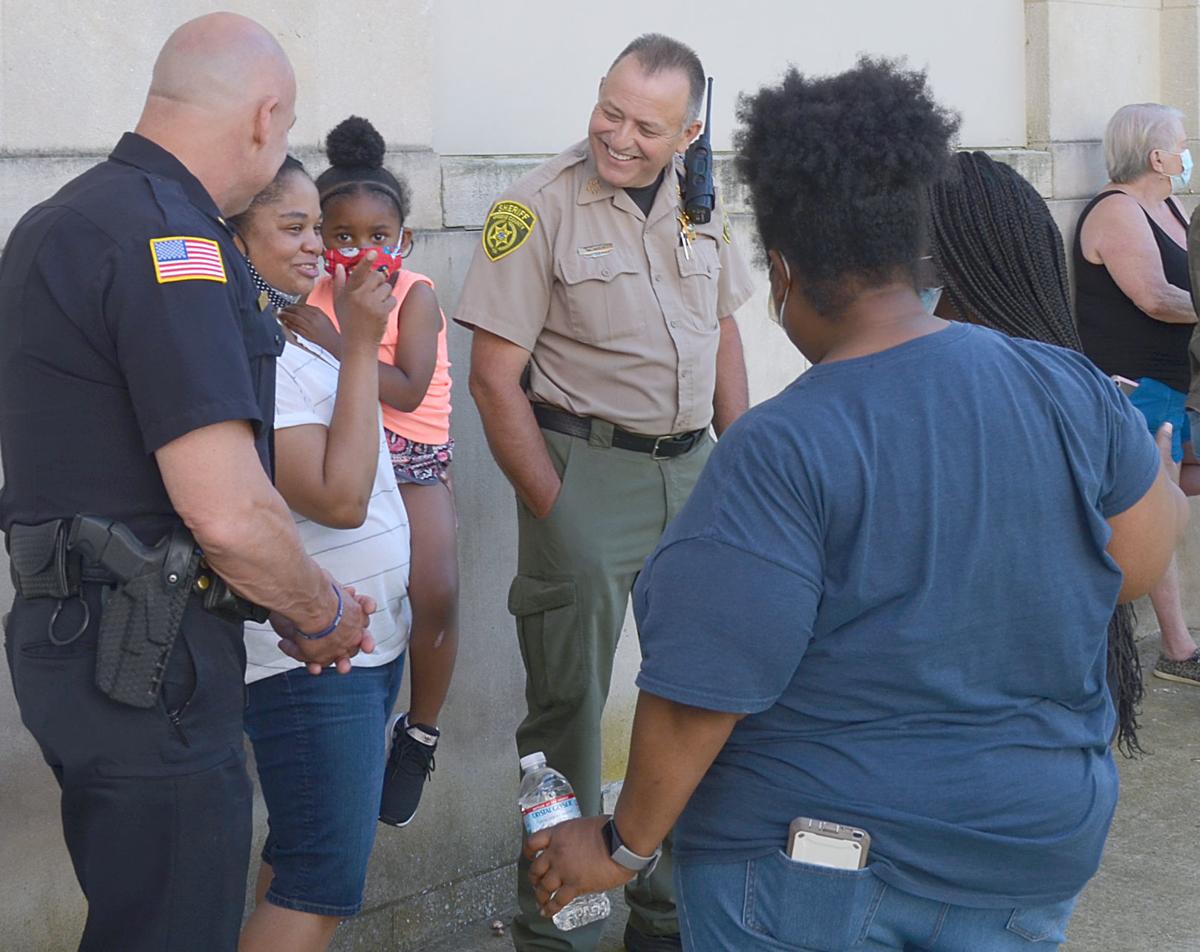 Greeneville police Chief Tim Ward, at left, and Greene County Sheriff Wesley Holt speak with participants in a rally held June 1 in Greeneville to protest police brutality against African Americans after the death of George Floyd.

Participants listen intently during in a recent training session at the East Tennessee Regional Law Enforcement Academy at WSCC.

Greeneville police Chief Tim Ward, at left, and Greene County Sheriff Wesley Holt speak with participants in a rally held June 1 in Greeneville to protest police brutality against African Americans after the death of George Floyd.

Disturbing images of George Floyd slowly dying on a Minneapolis street as a police officer knelt on his neck have generated both peaceful protests and destructive rioting across the country.

Floyd’s death is the latest in a series of killings of unarmed African Americans by police, and again raises questions about training and the use of force by law enforcement.

Walters State issued a statement this week regarding training at the police academy:

“The Walters State Regional Law Enforcement Academy does not teach the knees-to-the-neck restraint as part of its use-of-force training.”

The statement said that cadets “are evaluated by academy staff with an emphasis on the legal and ethical application of use of force. The curriculum taught at the academy includes instruction in cultural diversity and ethics in law enforcement.”

Walters State earlier issued a statement in regard to the death of Floyd.

“This senseless and tragic act of violence has once again brought to the forefront the inequalities and injustices that still exist in 2020,” it said in part.

“Racial discrimination and economic inequality are terrifying realities for our minority communities. Walters State must take this opportunity to affirm and renew our commitment to remove these social barriers through our mission to transform lives through education. We must remind everyone that ‘every’ American has the unalienable constitutional right to life, liberty, and the pursuit of happiness,” the statement said.

Greeneville police “undergo yearly training regarding de-escalation and use of force,” Ward said.

“We have specific policy regarding neck restraints. They are considered lethal force,” Ward said.

Ward said all Greeneville police officers wear body cameras, and have for about two years.

“We have policy regarding the use of these cameras,” he said.

Car cameras are also in use by Greeneville police.

“The death of George Floyd will no doubt be addressed in GPD yearly training,” Ward said.

Greene County sheriff’s deputies are trained in de-escalation techniques during academy and in-service instruction “and we try to avoid the use of force when possible,” Holt said.

Sheriff’s department policy states that deputies “shall use only the minimum amount of force necessary to control a person or situation, and accomplish lawful objectives.”

“If an officer has to use any type of force on a subject, a written report on the use of force has to be filed and is reviewed by the patrol captain and chief deputy,” Holt said.

All patrol-duty sheriff’s deputies are issued body cameras. Cameras for all patrol deputies and School Resource Officers were purchased after Holt took office.

“This is to not only protect the suspect, but to protect the officers and department against false allegations,” Holt said.

Holt said shift supervisors, which consist of a lieutenant and sergeant, “monitor all the officers on their squad.”

“All officers are required to go through an extensive Field Training Officer program to address any problems that may be seen in that new officer. Early intervention into any problems is key to successful completion of the FTO program,” Holt said.

“At this time, we see no changes in the way we are training our officers,” Holt said.

Holt said that neck restraints, neck holds and choke holds “are not to be used by officers of this department as per our written policy.”

Suzanne A. Luban, Stanford Law School clinical supervising attorney and lecturer in law, wrote on a June 4 blog on the law school website that a “serious” philosophical flaw in officer training relating to the amount of force used exists.

The degree of force called for is the “amount of effort required by police to compel compliance by an unwilling subject,” as defined by the International Association of Chiefs of Police.

“Police may end up using more severe or damaging force than warranted by the nature of the crime suspected or the type of noncompliance,” Luban wrote. She wrote that another “grave risk” of the policy “is that police may employ force to ‘punish’ a suspect for resisting.”

“After George Floyd complained of claustrophobia when the officers forced him into the police car, the officers dragged him out of the car and pressed him face-down onto the street. Three officers kneeled to apply pressure on Mr. Floyd’s airway and chest. When Mr. Floyd cried out, another officer taunted him, saying, ‘Get up. Get in the car.’ The officers’ continued pressure on his neck and back prevented him from getting up,” Luban wrote.

Former Minneapolis police Officer Derek Chauvin, who now faces second-degree murder and other charges, used his knee to perform a “carotid restraint,” which applies pressure to vascular veins to temporarily cut off blood flow to the brain, rendering a person unconscious.

“We all saw that he continued this pressure for nearly three minutes after Floyd went limp,” Luban wrote.

“This type of control technique must be universally outlawed, especially when the person is handcuffed and therefore poses no serious danger to officers. The question of whether that hold was legal will be decided by a jury, but we would say no, it was not legal,” Luban wrote.

“Using this restraint on a handcuffed man begging to be allowed to breathe was a civil rights violation, a violation of all of those officers’ solemn duty to protect the life of their captive, and a violation of due process under the U.S. Constitution,” she wrote.

In the wake of Floyd’s death, Luban wrote that many police agencies are reexamining their own policies and some, such as several California police agencies, are banning both choke-holds and carotid restraints.

Some advocates say defunding police is not as radical a concept as it may sound.

Defunding could take the form of reducing police budgets and no longer asking officers to perform some jobs they often don’t prefer to do, such as resolving family and school disputes and moving homeless people into shelters.

Increases in funding for education, health care and other social services would happen under some recent proposals.

Advocates say the challenge is that many people equate the term “defunding” with a major reduction in policing, not a popular idea among many Americans.

Neither Holt nor Ward see defunding as a practical answer to issues raised after the death of George Floyd.

“When you get rid of a police force, you have a lawless society,” Holt said.

“Defunding or cutting funding to law enforcement agencies will only allow the criminal interest to grow. With less officers on the streets patrolling, the criminal element will be allowed to thrive and take advantage of a limited law enforcement presence,” Holt said. “You will see the crime rate increase and less crimes be solved due to limited manpower.”

Ward said proposals to reorganize, defund or reduce funding of law enforcement agencies have been made in the past.

“Communities across the nation fund law enforcement to the extent that they want now,” he said. “That process is constantly under review and public scrutiny.”

Ward said the possibility of reduced funding is always present “and is an issue that law enforcement officials deal with daily.”

“Can there be a better way to go about the daily business of serving our communities? Definitely. Our job as law enforcement administrators is to recognize these opportunities for improvement and to seize upon them and to implement them,” he said.