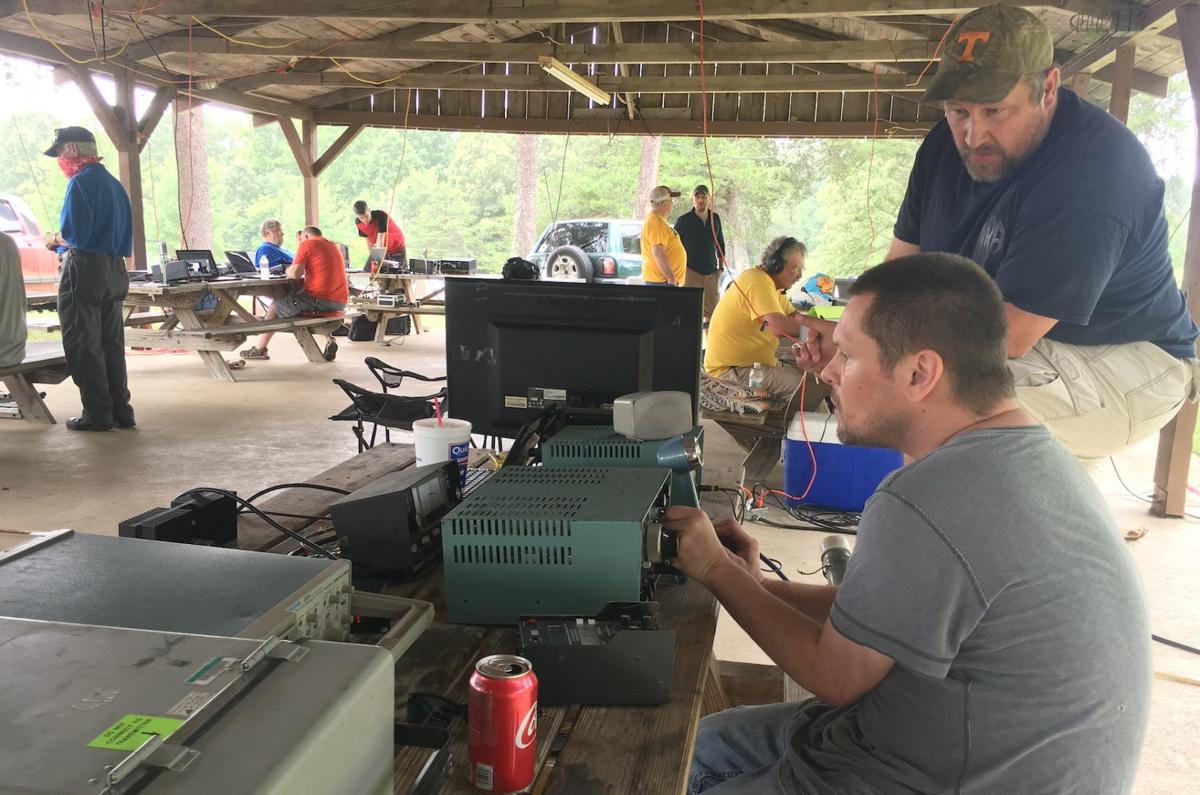 Dennis Dunn tunes the antique 1960s Swan 350 radio he brought to Kinser Park Saturday as Mark Slemp, who spoke on the air for the first time on Saturday, looks on. 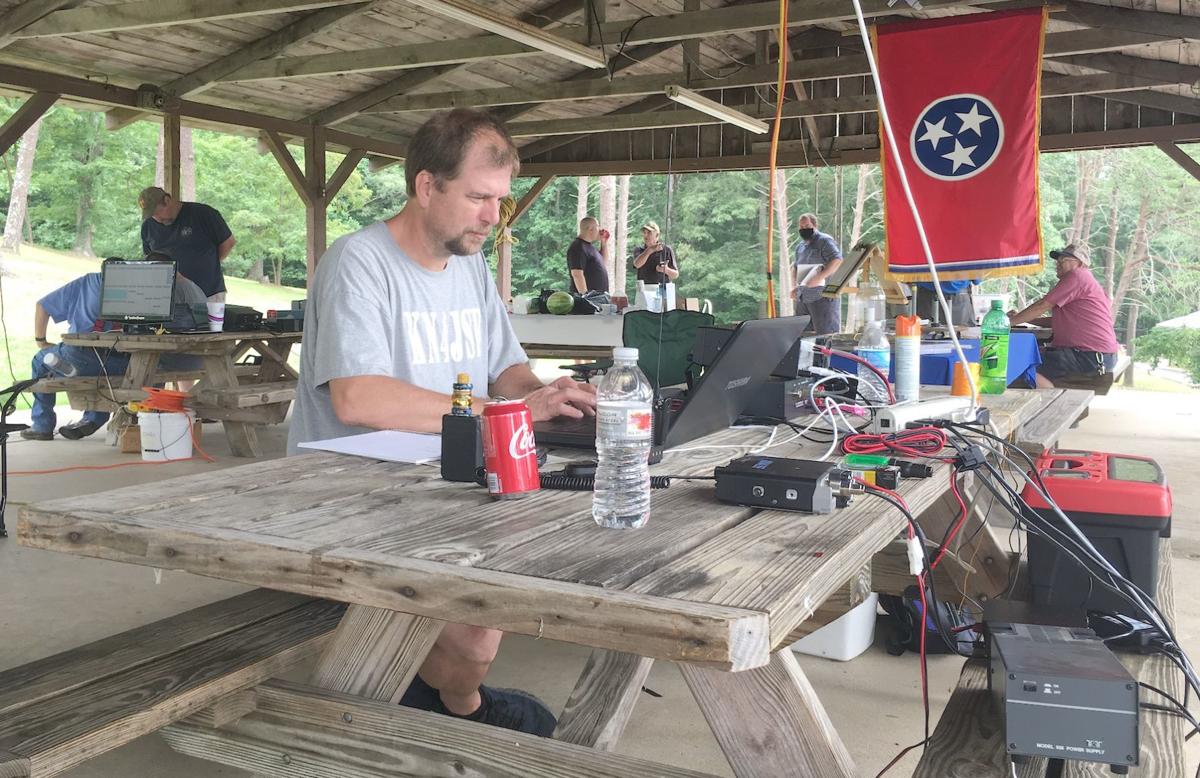 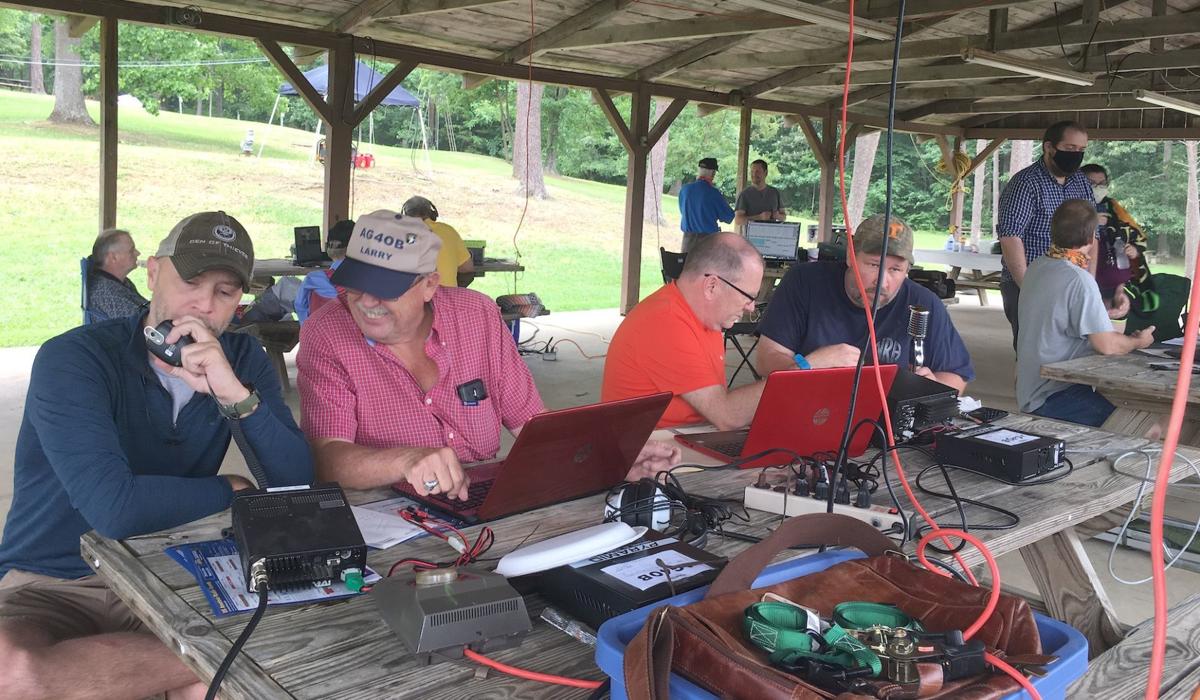 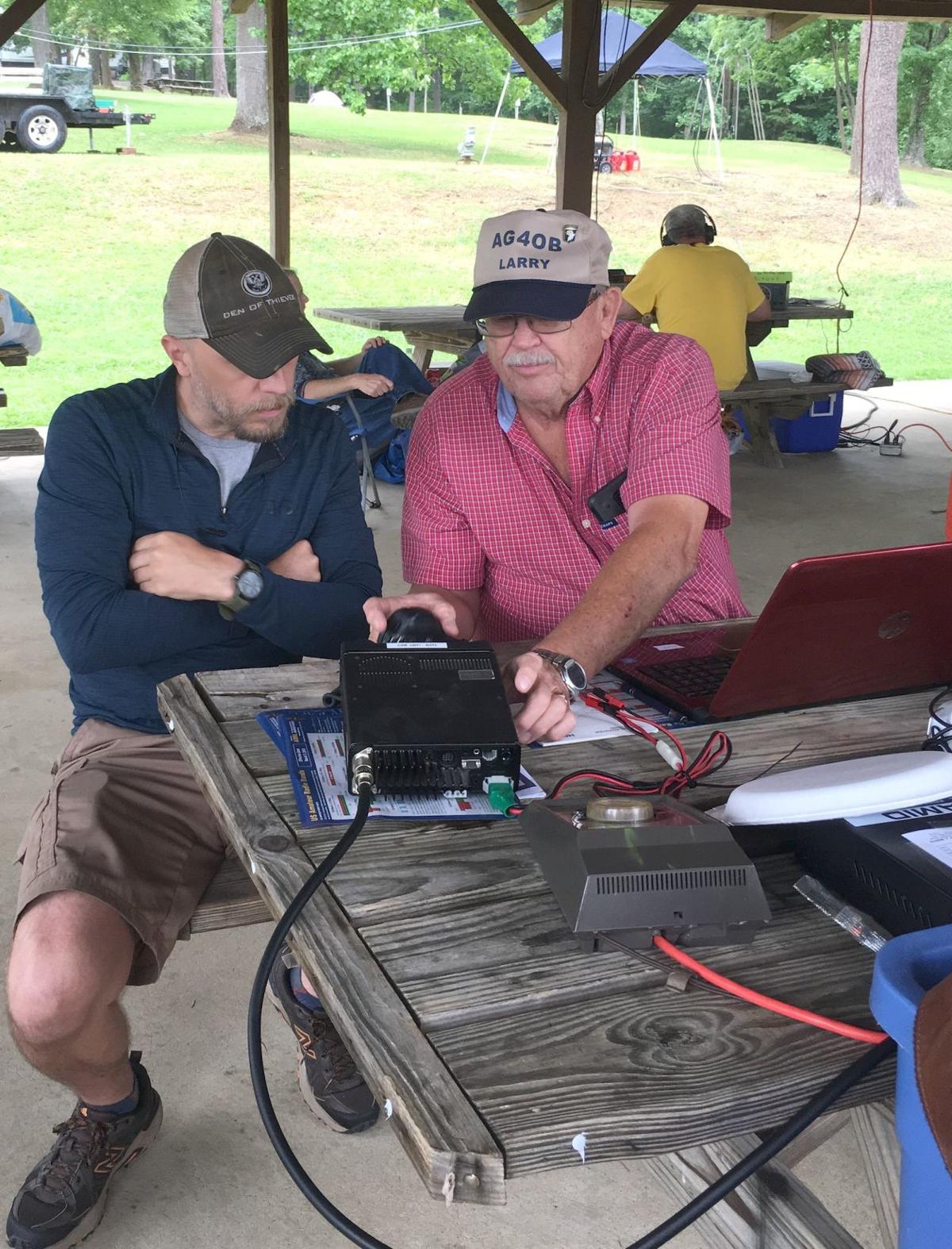 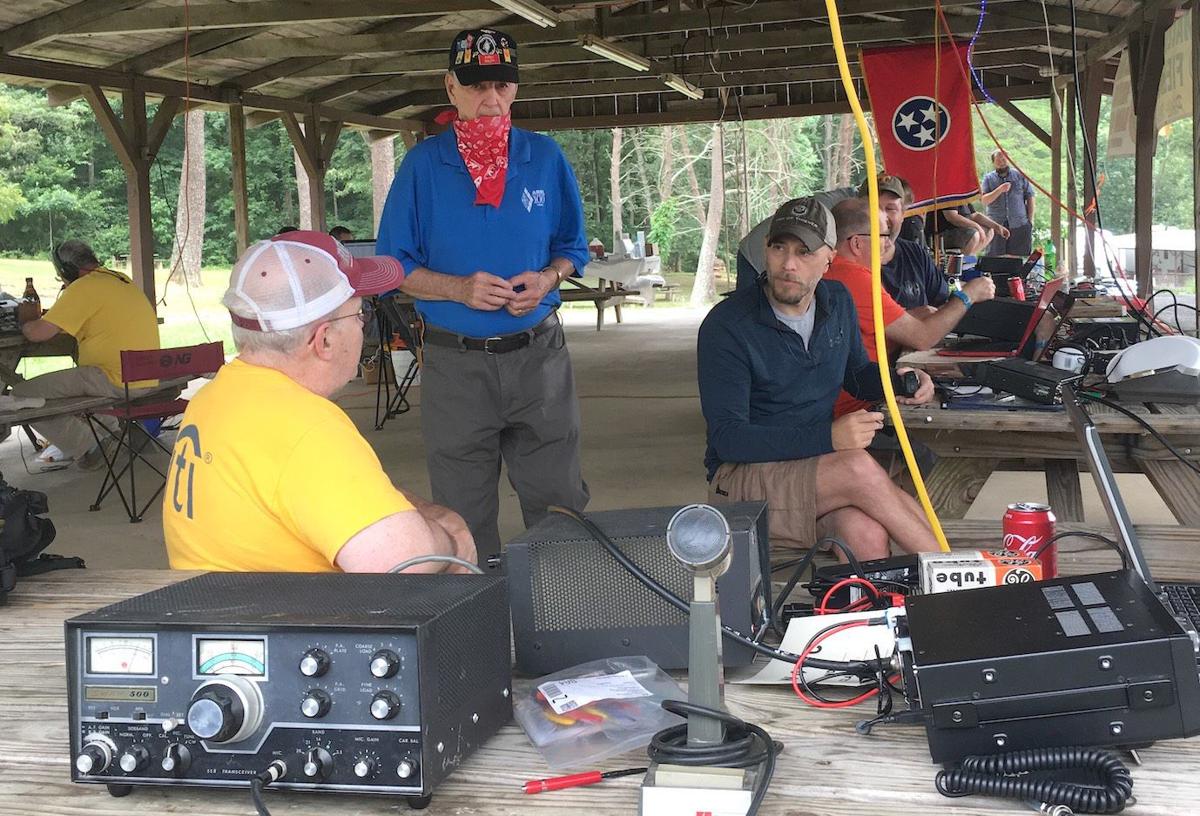 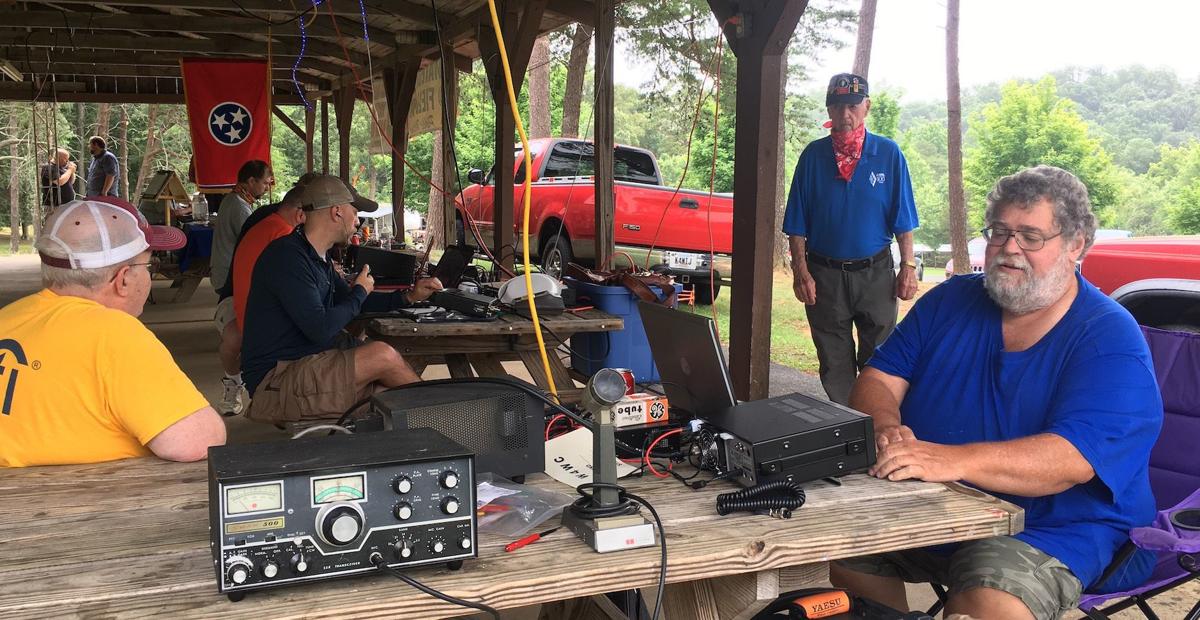 Bob Gass, right, and fellow Andrew Johnson Amateur Radio Club members and visitors work to make the most connections with other radio clubs.

Dennis Dunn tunes the antique 1960s Swan 350 radio he brought to Kinser Park Saturday as Mark Slemp, who spoke on the air for the first time on Saturday, looks on.

Bob Gass, right, and fellow Andrew Johnson Amateur Radio Club members and visitors work to make the most connections with other radio clubs.

From 2 p.m. Saturday to 2 p.m. Sunday, ham radio enthusiasts with knowledge ranging from beginner to expert gathered under a pavilion at Kinser Park for some fun, friendly competition and emergency preparedness training.

Club members were participating in the 2020 American Radio Relay League Annual Field Day event, organized by the national association for amateur radio and designed to help amateur radio operators practice and strengthen their skills for emergencies in a non-emergency situation.

Clubs all across the United States and Canada worked to establish communications with as many other clubs in the 24-hour period as possible in the annual Field Day. Each June more than 40,000 hams throughout North America set up temporary transmitting stations in public places to demonstrate ham radio’s science, skill and service, according to the American Radio Relay League website.

Amateur radio, also fondly known as ham radio, is both a public service and an enjoyable pastime, club members said.

“If phone systems go out or there’s no signal, these guys will be more than happy to deliver your message,” said Dennis Holt Jr., who operated a digital station in the event on Saturday. “Our purpose is to communicate. It could be a simple ‘happy birthday,’ or it could be a medical emergency.”

As for the Field Day event, Holt said, “the purpose is to break down your equipment, leave the comfort of your home and set it up outside, like in an emergency. So if there’s an emergency, we’ve had practice.”

Such practice was put to use in April 2011, when deadly tornadoes touched down in the Camp Creek and Horse Creek communities.

Current club president Ian Bible was among those on site in Camp Creek helping to spread communications related to the emergency when other communications outlets were taken out by the high winds.

He said club members spent about 8,000 hours that month assisting the community.

Ralph Bible, who was one of the founding members of the club in the 1950s, said the Andrew Johnson Amateur Radio Club based their community aid operations in 2011 on the tennis court at Camp Creek School and have found other places to operate in other emergencies that damaged or eliminated other communications methods, such as floods.

“If it happens, we’ll be there,” Ralph Bible said.

“We have fun doing this, but we’re serious,” said Ian Bible. “They call us amateurs, but we do a lot of professional work.”

Part of the hobby aspect of ham radio is that many operators enjoy repairing old radios, which could then be used in an emergency if needed.

For the second year in a row, club members decided to have a vintage theme to the evening, opting for older models to enjoy some nostalgia for Field Days past.

Many club members are electronics enthusiasts, like Dennis Dunn, a member of three years who brought one of the vintage radios on Saturday — a Swan 350 that until Saturday had not been on the air in many years.

Dunn said he has always had a keen interest in technology and electronics and was introduced to the world of ham radio by his uncle.

Club members have other interests, like Holt, who said he initially got involved with ham radio because he wanted to use radio communications while playing paintball.

“Everybody has their own interests, but we have common ground with radio,” said club member Bob Gass, who maintains a relay station on Camp Creek Bald, also known as Viking Mountain.

The pavilion at Kinser Park also attracted some interested beginners from outside Greene County, like Craig Miller, who said he just got his entry level amateur radio operating license last week.

Miller said he came to Greene County from Atlanta, Georgia, to visit family in Mosheim and decided to check out the event after hearing club members talking about it.

“I thought it would be a good opportunity to see what it’s like and learn from people who have been doing it a long time, who have decades of experience,” Miller said. “It’s quite an opportunity, and I’m glad to be here.”

Anyone can become a licensed amateur radio operator. The only requirement is to pass the licensing exam, which can be arranged through the local club and taken at a meeting.

Meetings of the Andrew Johnson Amateur Radio Club have been taking place virtually as the club’s normal meeting place, the Roby Fitzgerald Adult Center, has remained closed due to COVID-19.

Meetings are the first Tuesday of each month at 7 p.m. Members of the club encourage anyone interested to get involved.