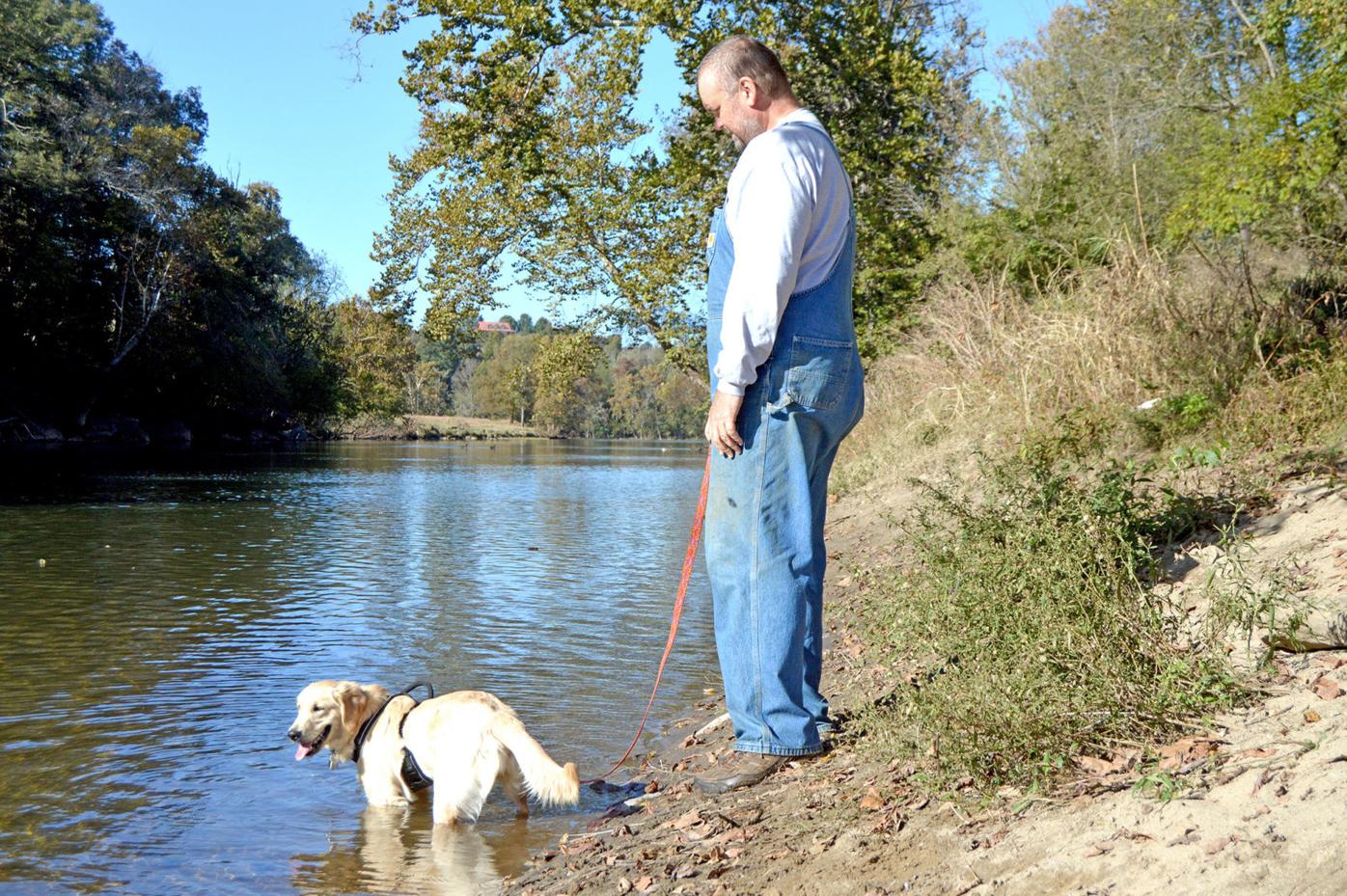 Scott Jay, of Limestone, and his golden retriever, Genie, play on the bank of the Nolichucky River in David Crockett Birthplace State Park. Parts of the river were sampled in recent studies to determine if they contain uranium and plutonium deposits from manufacturing of nuclear fuels and ordnance. 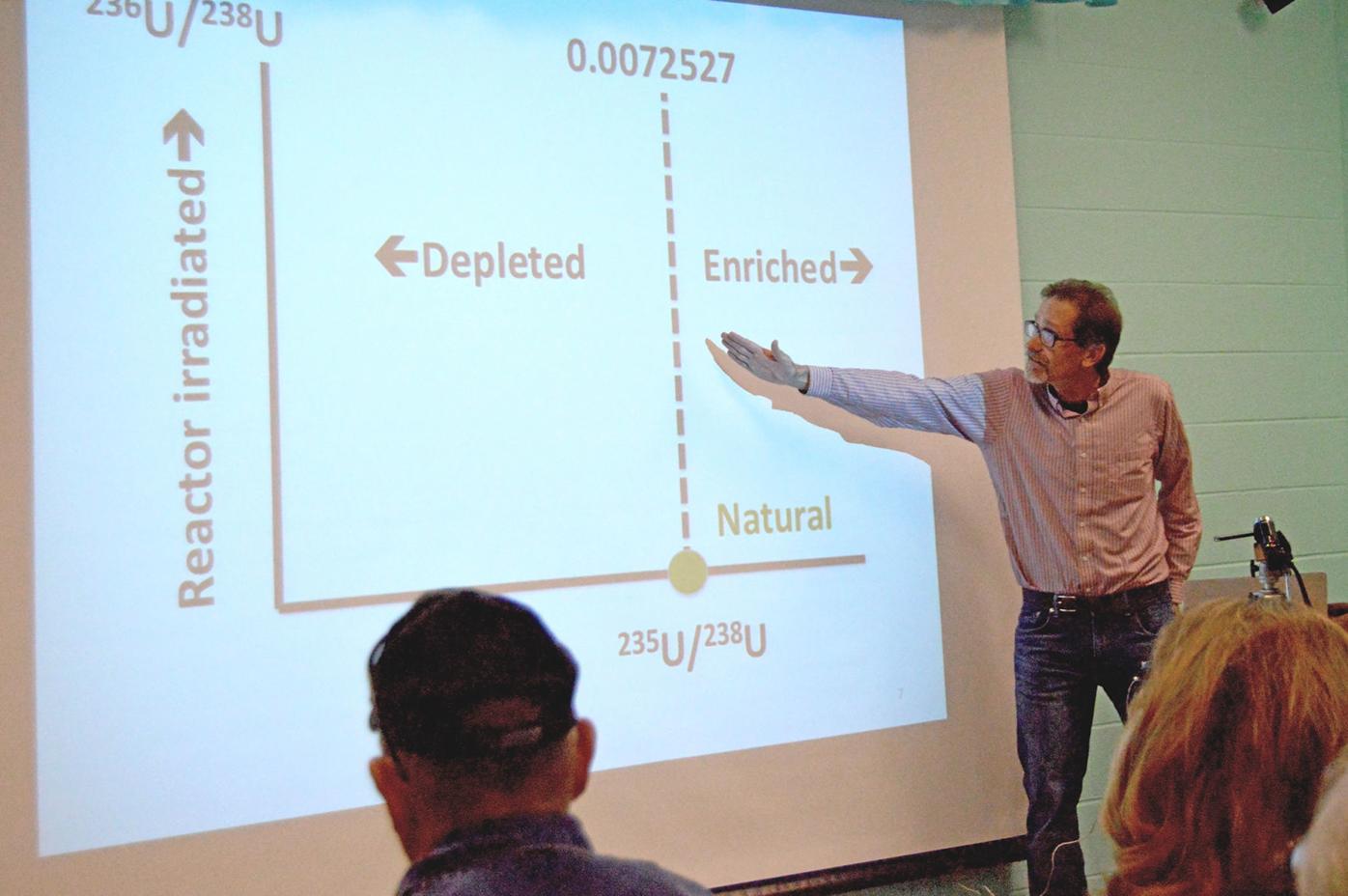 Scientist Michael Ketterer explains the difference between enriched, naturally occurring and depleted uranium during a free public lecture at the Jonesborough Public Library Tuesday. Kettering has been studying uranium and plutonium in the Nolichucky Watershed. 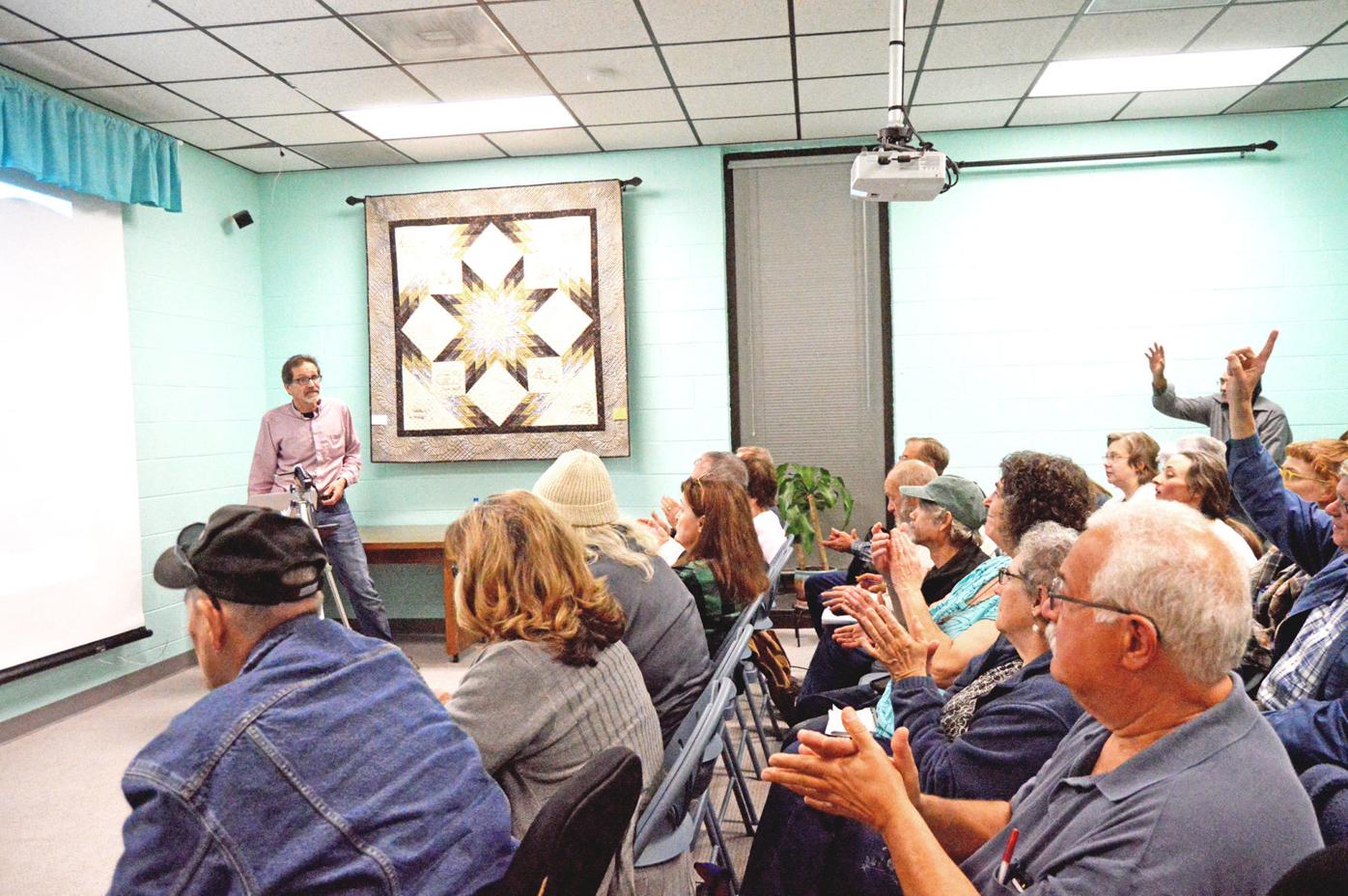 About three dozen people attended a free public lecture Tuesday night by scientist Michael Kettering about the presence of uranium and plutonium in the Nolichucky Watershed. The lecture was held at the Jonesborough Public Library. 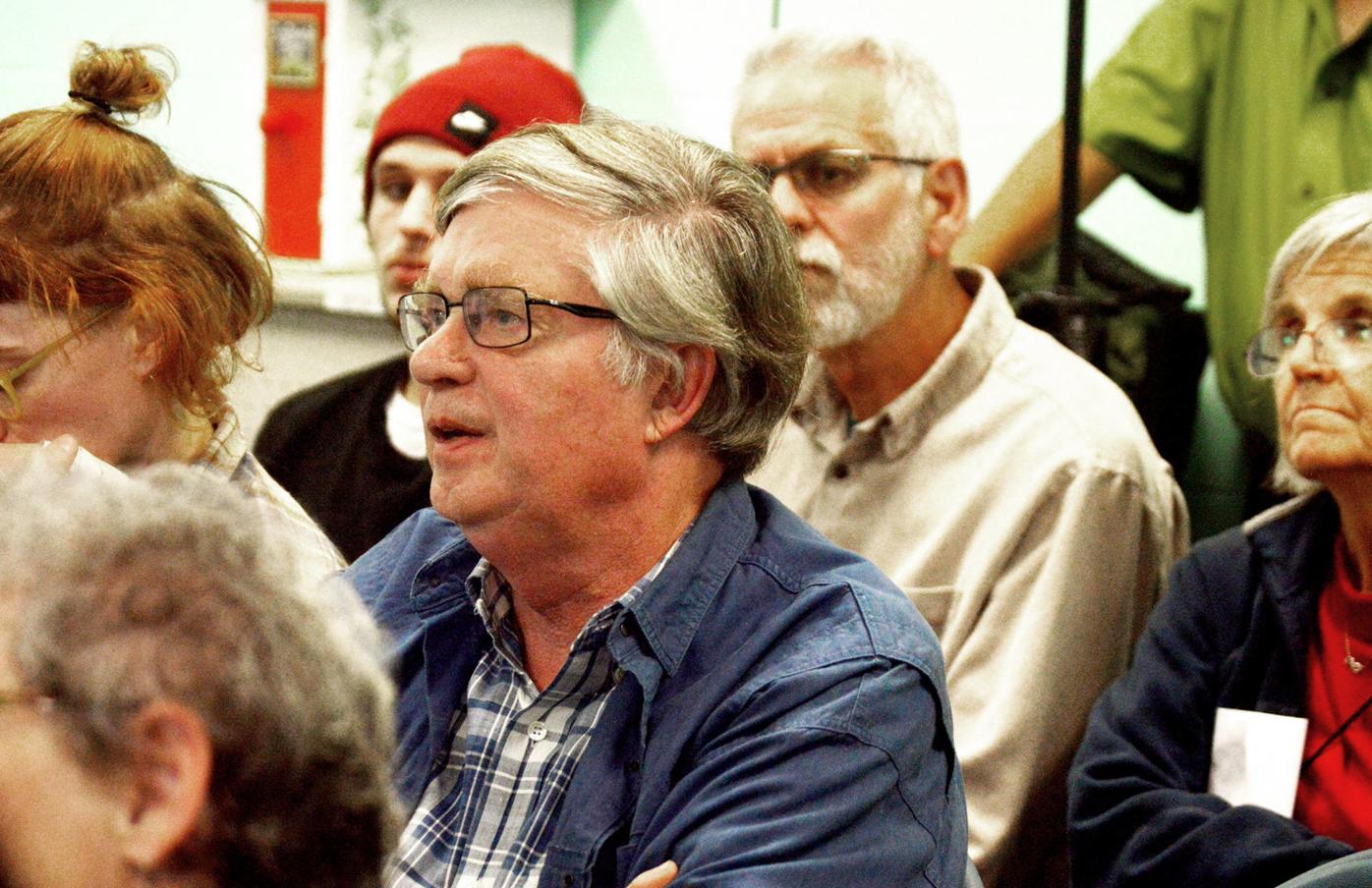 Dave Close, of Johnson City, asks a question during a free public lecture Tuesday night about uranium and plutonium in the Nolichucky watershed. 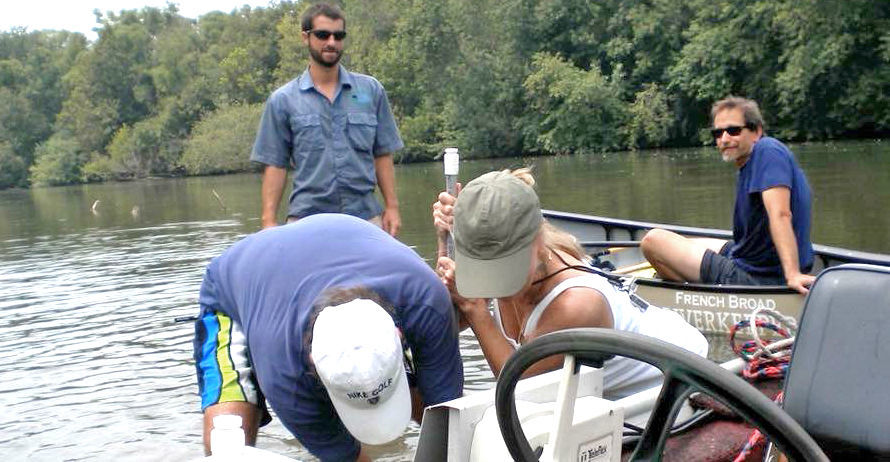 Michael Ketterer, far right, takes water and sediment samples from the Nolichucky River with a group of volunteers. Ketterer then analyzed the samples for the presence of enriched uranium.

Scott Jay, of Limestone, and his golden retriever, Genie, play on the bank of the Nolichucky River in David Crockett Birthplace State Park. Parts of the river were sampled in recent studies to determine if they contain uranium and plutonium deposits from manufacturing of nuclear fuels and ordnance.

Scientist Michael Ketterer explains the difference between enriched, naturally occurring and depleted uranium during a free public lecture at the Jonesborough Public Library Tuesday. Kettering has been studying uranium and plutonium in the Nolichucky Watershed.

About three dozen people attended a free public lecture Tuesday night by scientist Michael Kettering about the presence of uranium and plutonium in the Nolichucky Watershed. The lecture was held at the Jonesborough Public Library.

Dave Close, of Johnson City, asks a question during a free public lecture Tuesday night about uranium and plutonium in the Nolichucky watershed.

Michael Ketterer, far right, takes water and sediment samples from the Nolichucky River with a group of volunteers. Ketterer then analyzed the samples for the presence of enriched uranium.

The first paragraph of this story has been altered from its original version to clarify that Michael C. Ketterer and Scott C. Szechenyi presented findings of a study on enriched uranium found in the Nolichucky River watershed. Due to changes made in the editing process, a previous version said the scientists issued warnings about the uranium levels.

Ketterer and Szechenyi discussed their analysis of hundreds of water, soil and sediment samples collected from sites downstream of the Nuclear Fuels Services site in Erwin and Aerojet Rocketdyne in Jonesborough, including drinking water in Greeneville.

The event was organized by Barbara O’Neal, president of Erwin Citizens’ Awareness Network, ECAN, and Linda Modica, vice president of the organization and co-chair of Appalachian Peace Education Center.

O’Neal said the event was organized to educate the public about the presence of enriched uranium downstream of the facilities.

“The public always has a right to know and they don’t always know from the regulators, like the Nuclear Regulatory Commission,” O’Neal said. “They tend to just glance over this and they side many times with the industry they regulate, as opposed to working for the public, which they’re supposed to do.”

Ketterer defined isotopes as specific forms of a chemical element that differ from one another in how many neutrons they have. That difference determines the degree of radioactivity.

“Isotopes are chemically identical but differ in mass,” Ketterer explained. “When they are radioactive, isotopes of different masses have different properties. They decay by different mechanisms and at different rates.”

According to the Agency for Toxic Substances and Disease Registry, the effects of Uranium exposure depend on the dose, duration, route of exposure and whether other chemicals are present.

Uranium, designated by the chemical symbol U followed by the number that differentiates the isotope, mainly affects the kidneys and respiratory tract.

Naturally occurring U238 and U235 may be found in the environment. U236, an enriched form, is nearly absent in nature but is produced in large amounts when uranium is irradiated in a reactor. This anthropogenic, or human-produced, uranium serves as a fingerprint that allows scientists to determine the source of the uranium.

Using a machine called a mass spectrometer, Ketterer analyzed uranium from water and soil samples taken upstream and downstream of the Erwin Nuclear Fuels Services facility on the Nolichucky River and Aerojet Rocketdyne in Jonesborough, which produces ordnance and propulsion fuels for the aerospace and defense industries.

He determined that enriched U236 in the samples came from NFS. His findings included the absence of enriched uranium upstream of NFS and “kilograms or more” downstream. Enriched uranium was also found in a water sample from a tap in Greeneville, which uses the Nolichucky as a source of drinking water.

Ketterer’s team analyzed drinking water samples from three homes in Erwin, Jonesborough and Greeneville that did not have water filtration systems on their taps. A dozen random samples were taken from each home over the course of a month.

Analysis of water and sediment samples from Douglas Lake, roughly 95 miles downstream, show the presence of U236 and Ketterer found evidence for groundwater transport of uranium, in addition to its presence in the Nolichucky River from wastewater discharge at NFS.

“Some of that uranium comes from the wastewater discharge pipe, but I would say much more of it is coming from non-point source seeps and springs, groundwater that’s flowing under the NFS facility and then mixing with the river,” Ketterer said.

He told the audience that there was no doubt the samples he and his team analyzed contained enriched uranium from NFS.

“We can say with essentially 100 percent certainty that it’s there,” Ketterer said. “I am as certain as I can be that we are detecting enriched uranium in this environment downstream (of NFS). I would have no problem whatsoever testifying to that in a criminal case. It would be unimpeachable.”

Ketterer emphasized that none of the findings exceeded the legal maximum contaminant level, MCL, for uranium, which is 30 micrograms per liter. Szechenyi added that the focus of their study was to determine if there was a presence of U236, not to measure the levels or total amount deposited over time.

“An important point to make here is that this method is qualitative versus quantitative,” Szechenyi said. “This method doesn’t measure the quantity that is out there. It answers ‘is it out there or is it not?’”

Ketterer added, “The degree of enrichment that we detect is largest closest to the source.”

Democratic candidate for state representative Park Overall attended the lecture and told the audience that the maximum containment levels for uranium and plutonium have been raised over the years to prevent industries from being penalized for exceeding the limits. In the Nov. 6 election, Overall is challenging incumbent Republican David Hawk for the 5th District state house seat that represents Greene County.

Nuclear Regulatory Commission Senior Public Affairs Officer Roger Hannah said he didn’t know where that information would have come from.

“I’ve been doing this for a long time and the limits have been consistent for decades, so I don’t know what she may be referring to,” Hannah said. “Typically, with environmental limits, not just radiological limits but other limits, they tend to get lower rather than higher over time, because people find out that something maybe more dangerous or you need to be more careful than you thought years ago.”

He added: “I’m not saying that she’s wrong; I just don’t know where that came from, and I’ve never seen information that would indicate that that is the case. I’ve been working in the nuclear industry for 30 years, and as far as I know the limits have been consistent through that period of time.”

A document from the EPA produced in 2001 posted online lists the same 30 microgram limit at that time.

Ketterer also said that plutonium analysis of soil and water samples were consistent “with a source like NFS.”

Aerojet Rocketdyne in Jonesborough uses depleted uranium rather than enriched uranium, according to Ketterer. Samples from soil taken “within a radius of a couple hundred feet” of the facility and from Little Limestone Creek show small amounts of depleted uranium.

“It’s a certainty that it’s there,” said Ketterer, after noting the levels were well below the maximum containment level regulations.

When asked if levels will continue to accumulate, Ketterer said that dispersion is more likely and concentrations could go down, but that certain events, like flooding or an earthquake, could cause higher levels of contamination.

“Let’s say a huge sinkhole opened up right in the middle of the NFS facility,” Ketterer said. “It’s plausible, and I can assure you that on a time scale, with the half-lives of these isotopes, things like that will happen.”

He added: “I think what would most worry me is sudden episodic releases due to accidents or natural phenomenon that might happen in the future. I wouldn’t lose sleep over it. I mean there’s not too much that any of us can do about these things anyway. But I would not lose sight of it, either.”

Hannah said he couldn’t speculate about possible scenarios that could cause harm to people or the environment, but the NRC would formulate an appropriate response should one arise.

“Our regulations are designed so that if there is an issue with environmental releases or something, that we could see that before it became a major problem,” he said. “We want to make sure that if there are any issues at any facility the NRC regulates, that those issues are addressed before they become more serious.”

He added: “In the past we have cited NFS for violations when they did not meet the regulatory requirements. We would not hesitate to do that again.”

Civil penalties, monetary fines, orders for corrective actions and shutting down operations at a facility licensed by the NRC are all within the agency’s legal authority.

Ketterer urged his audience to take responsibility for monitoring NFS and Aerojet themselves.

“I’m not trying to say be alarmed about it but keep an eye on the environment and measure what’s out there. I think it’s the responsibility of the people that live there to do this for themselves. I would take the matter into my own hands if I was the local community.”

He added: “You are the ones who are most affected by it. You have the most to lose. It’s your responsibility to understand your environment.”

Ketterer and Szechenyi hope to publish academic papers about the NFS and Aerojet studies by the middle of next year.

Ketterer has worked for the United States Environmental Protection Agency at the National Enforcement Investigations Center, and taught at John Carroll University, Northern Arizona University and Metropolitan State University of Denver. He has served as an expert witness in U.S. and state courts, worked as a consultant for a wide variety of academic, industrial and government organizations in the U.S. and internationally and is currently professor emeritus of chemistry and biochemistry at Northern Arizona University.

The event was co-sponsored by ECAN, Appalachian Peace Education Center and the Women’s International League for Peace & Freedom.