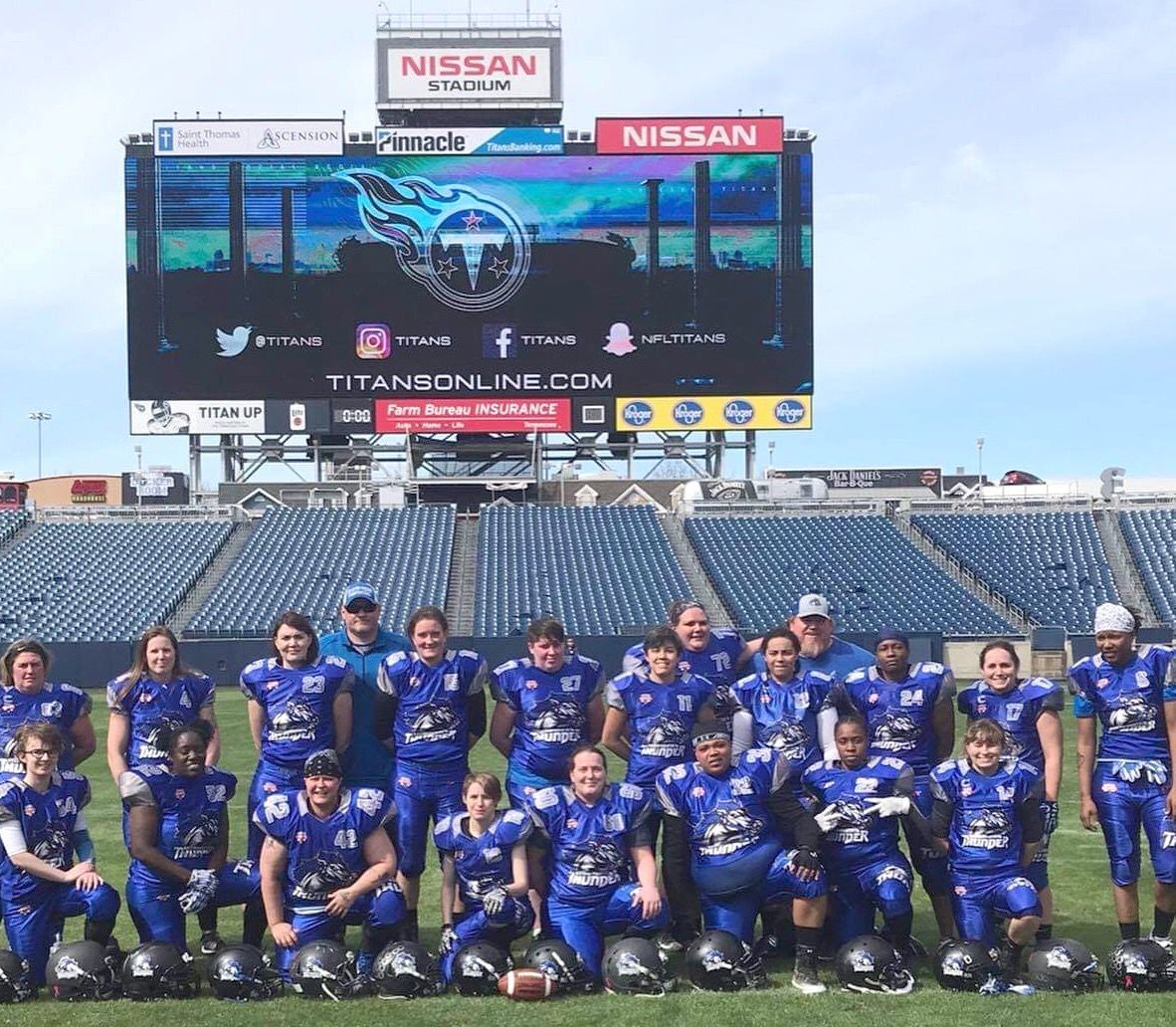 Members of the Tri-Cities Thunder women’s football team pose in Nissan Stadium, the home of the Tennessee Titans in Nashville. The team has played twice in the National Football League venue. 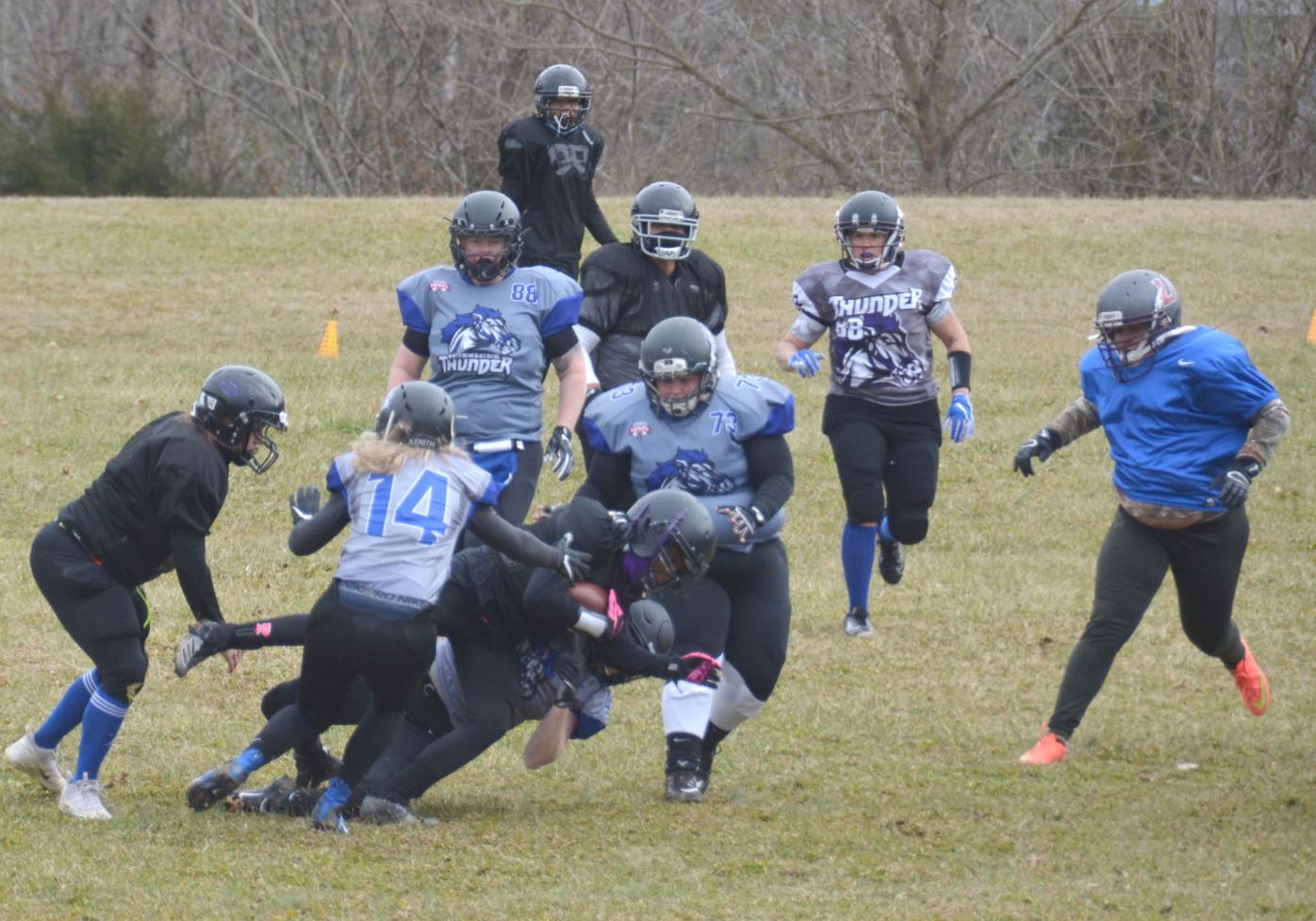 Members of the Tri-Cities Thunder tackle the quarterback of a South Carolina team during a scrimmage on Jan. 30 at Doak Elementary School field. The practice was the first of the year for the United States Women’s Football League team that will play its regular season games at Chuckey-Doak High School this year. 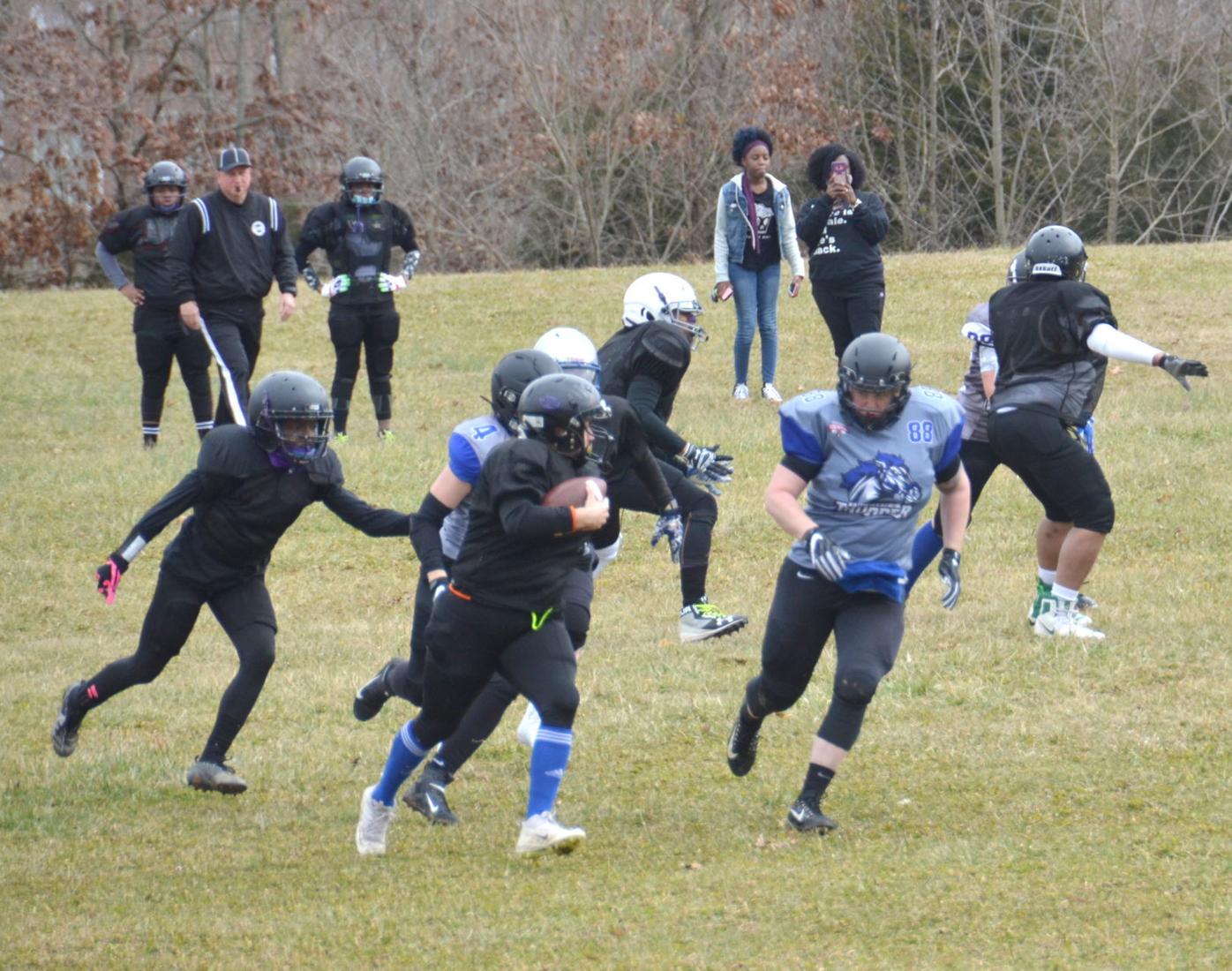 Tri-Cities Thunder players close in on a running back from a South Carolina team during a scrimmage Jan. 30. The team plays full contact football and follows high school rules. 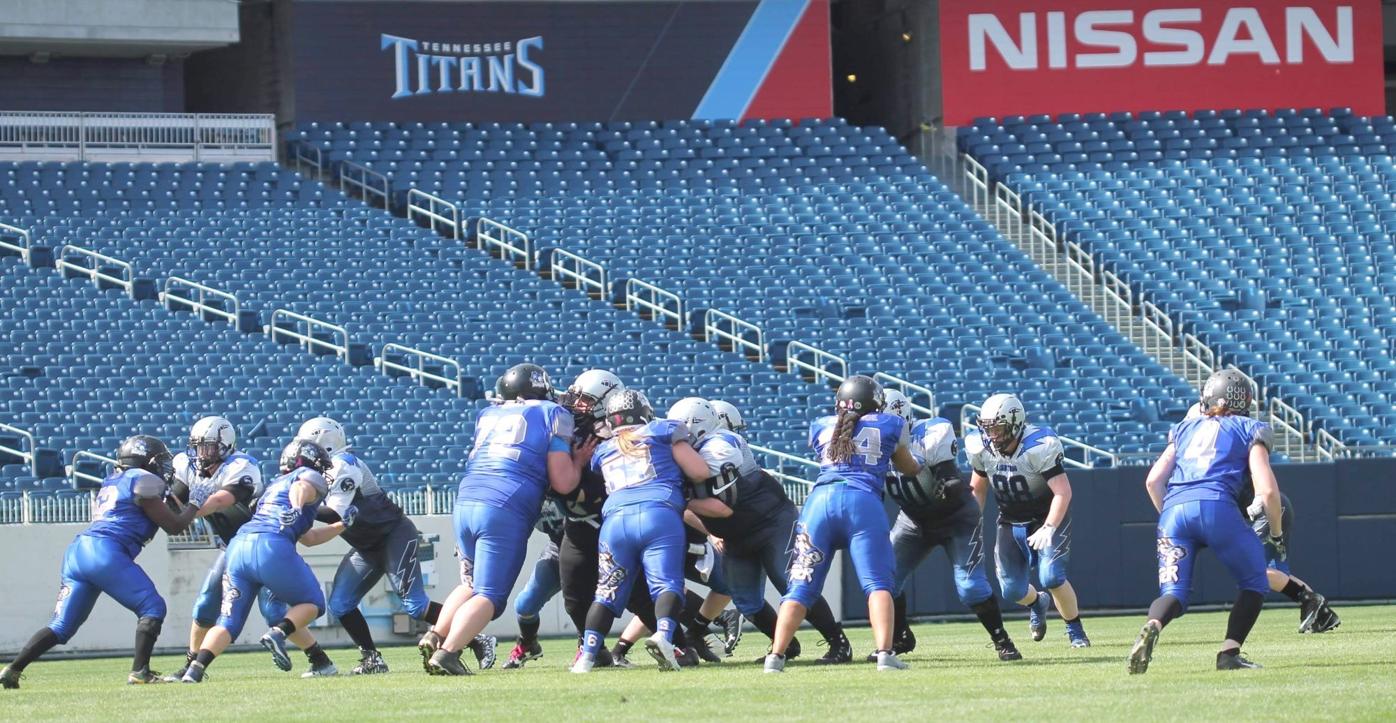 The Tri-Cities Thunder played the Knoxville Lightning in the first women’s football game to be played at the Tennessee Titans stadium. The team members had the opportunity to meet some of the National Football League players.

Members of the Tri-Cities Thunder women’s football team pose in Nissan Stadium, the home of the Tennessee Titans in Nashville. The team has played twice in the National Football League venue.

Members of the Tri-Cities Thunder tackle the quarterback of a South Carolina team during a scrimmage on Jan. 30 at Doak Elementary School field. The practice was the first of the year for the United States Women’s Football League team that will play its regular season games at Chuckey-Doak High School this year.

Tri-Cities Thunder players close in on a running back from a South Carolina team during a scrimmage Jan. 30. The team plays full contact football and follows high school rules.

The Tri-Cities Thunder played the Knoxville Lightning in the first women’s football game to be played at the Tennessee Titans stadium. The team members had the opportunity to meet some of the National Football League players.

The Tri-Cities Thunder may be the best kept secret in the region.

The professional women’s football team has won two championships and has a 34-9 record in a little over five seasons of play. During the 2021 season, the team, which is part of the United States Women’s Football League, is scheduled play its home games on Chuckey-Doak High School’s field.

But, Coach David Johnson, who began the team with his wife, Jennifer, said it is not uncommon to meet people from the region who have never heard of the team.

“In women’s football, we are always swimming upstream,” Johnson said. “One of the ironic things about it is that the team has been really good since we started.”

The journey to this point has been challenging, but has been worthwhile, he said. “It has been a grind. It has not been something we have taken lightly and not taken seriously. We have tried to be the best team we can.”

For 2021, the Tri-Cities Thunder is hoping to build on its past successes while working to increase the public’s knowledge of the team and support for the athletes, Johnson said. The team which includes players from Greene County, has its most members this year — 24, who range in age from 16 to 64.

The pandemic resulted in the suspension of play in the U.S. Women’s Football League last year. The Tri-Cities Thunder’s division is the only one that has not postponed the start of its season this year.

The Thunder’s coach said it is hoped that the teams will be able to play although he anticipates the season may only be four or five games. The regular season typically consists of eight games, beginning in April. Following the regular season, playoffs involving each team are held and end with the championship game in mid-July.

Teams in the United States Women’s Football League play full contact games and follow high school rules. The league is divided into three divisions, based on the number of players on the teams.

The Tri-Cities Thunder is in Division III, for teams with 28 members or fewer. Johnson said Division III games do have one exception from high school rules in that there are no kickoffs, which is a measure to help reduce injuries due to the smaller number of players competing on each team.

The Tri-Cities Thunder is now co-owned by four of the team members entering its sixth season as the Johnsons have stepped back to concentrate on coaching and playing.

One of those owners, Amanda Harvey, said she was interested in playing football as a girl but found no opportunities.

“When I was growing up, women playing football was considered too violent,” she said. “It did not fit into how girls were supposed to act.”

To provide more opportunities for women to play football, the team’s coach recommends that girls’ teams be organized on the high school level to play against each other.

“There are a lot of girls who want to play,” he said. “They love the game of football but have never had the opportunity to play.”

A lot of members are recruited to the team by word of mouth, and many are not sure at first if they want to participate.

“We invite them to come to a practice and try it, and most of them are bitten by the bug,” Harvey said.

The team’s coach said not having opportunities to play is something he hears from many of those who play or have played for the Thunder. It was also true for his wife.

Jennifer Johnson was interested in playing football and other sports in high school, but her parents did not allow her to participate in any, her husband explained. One day as the couple drove home after attending a Tennessee Titans game, they discussed women’s football and her desire to play.

With her husband’s encouragement, Jennifer looked up information about women’s football on the internet and found that there were teams in Charlotte, North Carolina, and Chattanooga. While the Charlotte team had already had its tryout for the season, Chattanooga had one upcoming.

Jennifer drove the two and half hours from their home for the tryout. The couple ran a trucking company at the time, and David was on the road.

“About three or four hours after the tryout started, my phone rang,” he recalled. “It was Jennifer. She was excited and said it was the greatest thing she had ever done.”

A film is being made about Jennifer Johnson and her journey in women’s football and will be premiered soon.

Playing on the Chattanooga team required great commitment from Jennifer as the team held practices twice a week in addition to the games on the weekend.

However, members of the team overall were not serious about playing football, David said, and Jennifer began talking about starting a team in the Tri-Cities.

“Everyone was saying that we should not do it, that it would not work,” he said. “People said that women would not like being coached or take it seriously. But, we had eight wins and one loss in our first season.”

As she began to play football, Jennifer said she soon discovered she needed to be in better physical shape to play, but also had a realization of what it takes to organize a team and coordinate games.

“I learned what it takes behind the scenes,” she said. “I didn’t realize what all goes on to have a game. I think a lot of women want to play, but they also need to see behind the scenes of what is required, like practicing in the rain and cold.”

As a coach, David Johnson said he sees many players come to a similar realization.

“They find out it takes a lot of hard work to play football,” he said. “Everyone has to want to play.”

Each player has the responsibility of paying for her own uniform and equipment as well as any costs involved in traveling. The team plays teams from other states including North Carolina, Virginia, South Carolina and West Virginia.

David Johnson said that it has been challenging to find businesses or industries to sponsor the team and help with some of those costs. The team is a nonprofit organization that accepts donations and scholarships.

Starting the team required not only commitment but a lot of hard work on the Johnsons’ part.

David recalled times when he would be giving pre-game instructions to the team, which Jennifer could not attend because she was busy trying to resolve an issue with getting an official or timekeeper to the game or giving the other team directions.

As team owners, the Johnsons had to arrange for places to play, secure referees and timekeepers for the games and coordinate concession stand workers.

However, David said, they would not have been successful without the help of others, because they could not do it alone.

“It took a lot of different people to make it happen,” he said.

Handing those responsibilities to others has helped him focus solely on coaching, David Johnson said, and his wife on playing.

Women’s football teams have limited practice opportunities as most of the women have careers, children or both, he said, and the coaches need to be prepared to make each one count.

There is often a learning curve for the women as they learn not only the rules, but plays and formations, Johnson said. As they join the team, some players did not know the difference between offense and defense, he said, but have learned.

“We just try to get everybody on the same page,” he said.

Each year, the team has had several new players. This year there are about 10 new players.

“Every year is a rebuilding year,” the coach said.

Taking the game seriously has resulted in the team being successful, he said, winning championships in 2017 and 2019 and playing in two others.

The Tri-Cities Thunder has also played games inside Nissan Stadium, hone field for the Tennessee Titans in Nashville. The regional team participated in the first women’s game in the Titans’ stadium and the second played in a National Football League stadium.

Playing after a Titans game against the Indianapolis Colts, Johnson recalled that the team waited inside the Colts tunnel for the game to end and were greeted by the NFL players as they came in.

“Andrew Luck (then Colts quarterback) gave the girls a thumbs up,” he said. “It was a great day for our organization.”