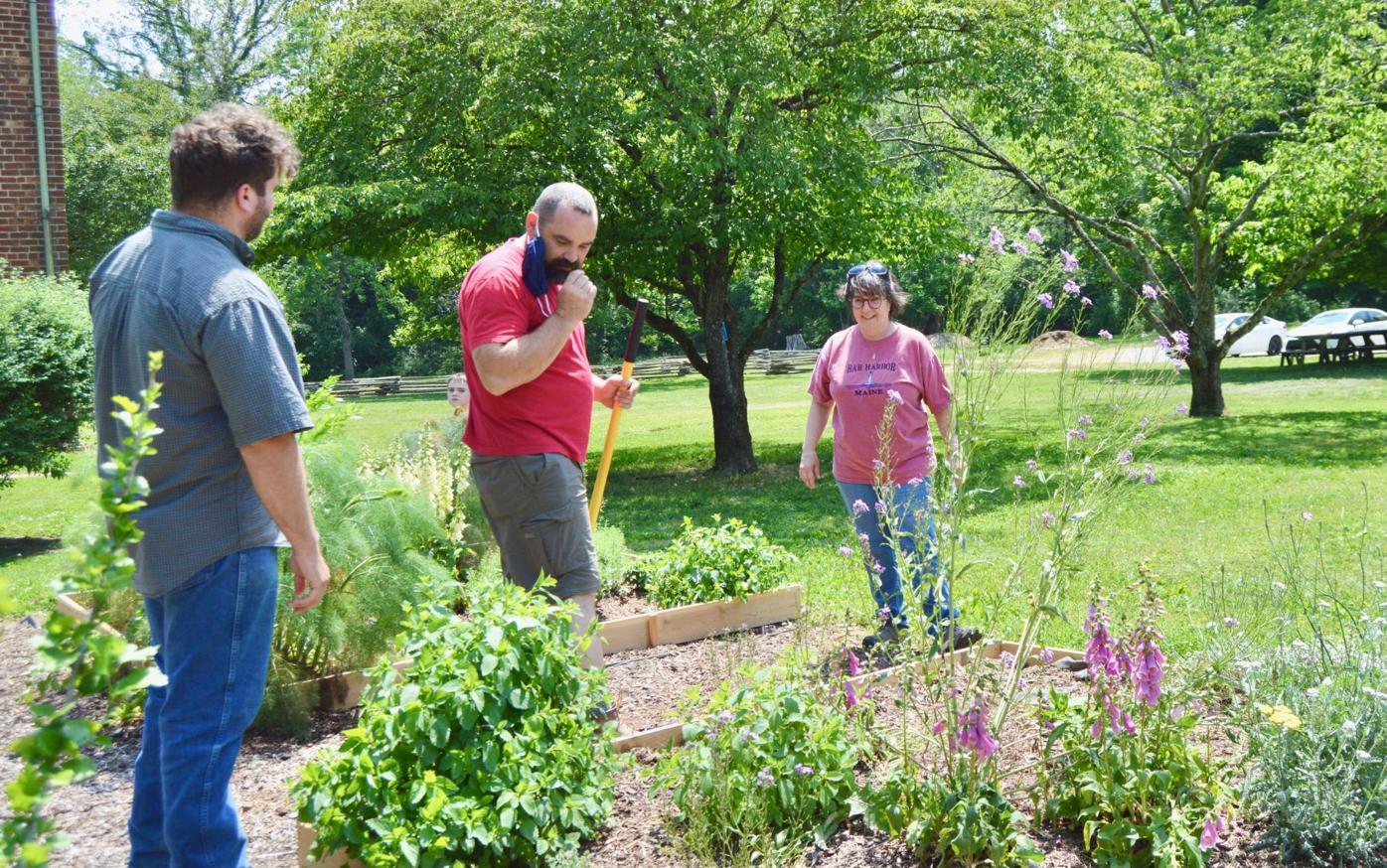 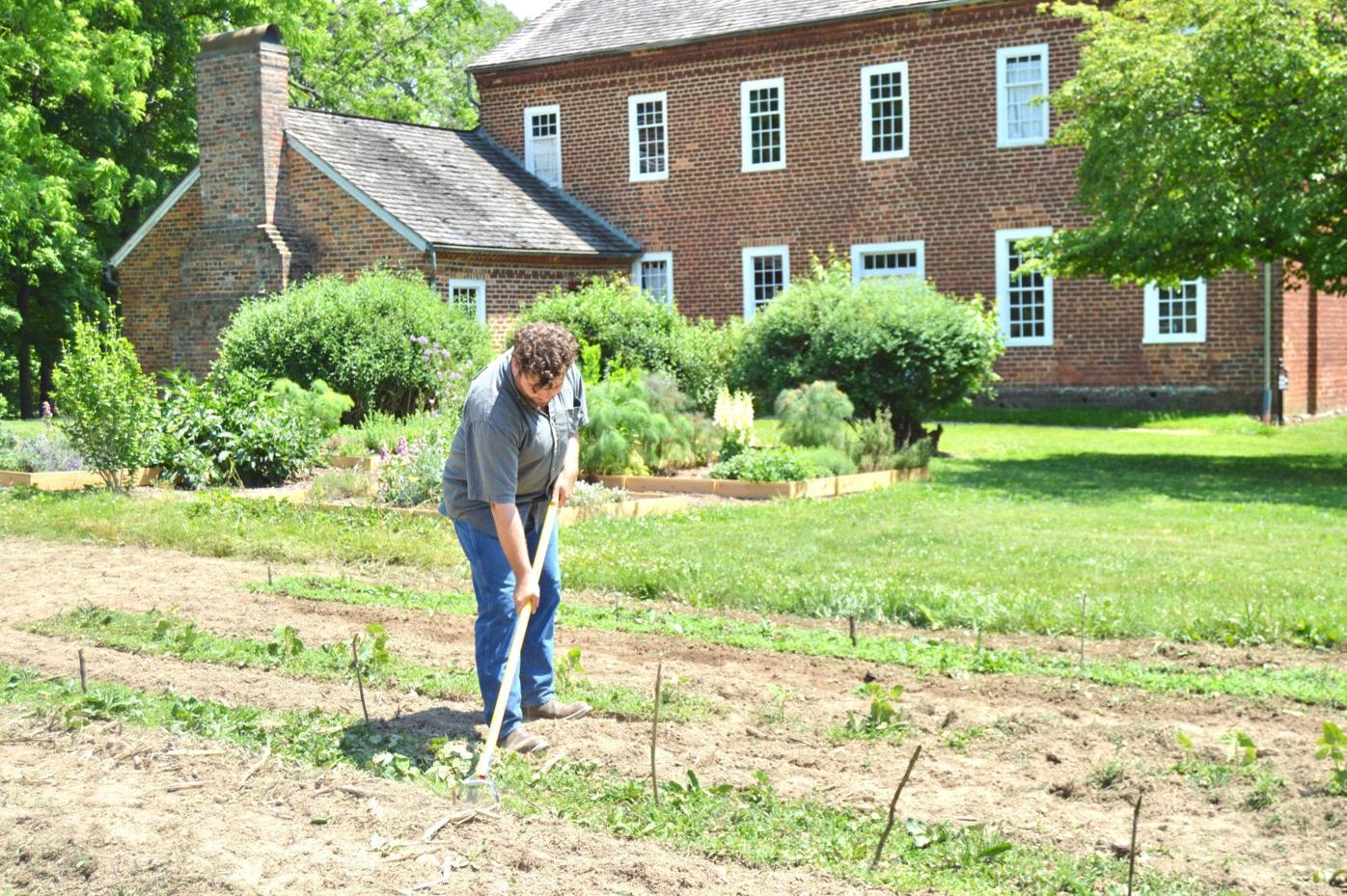 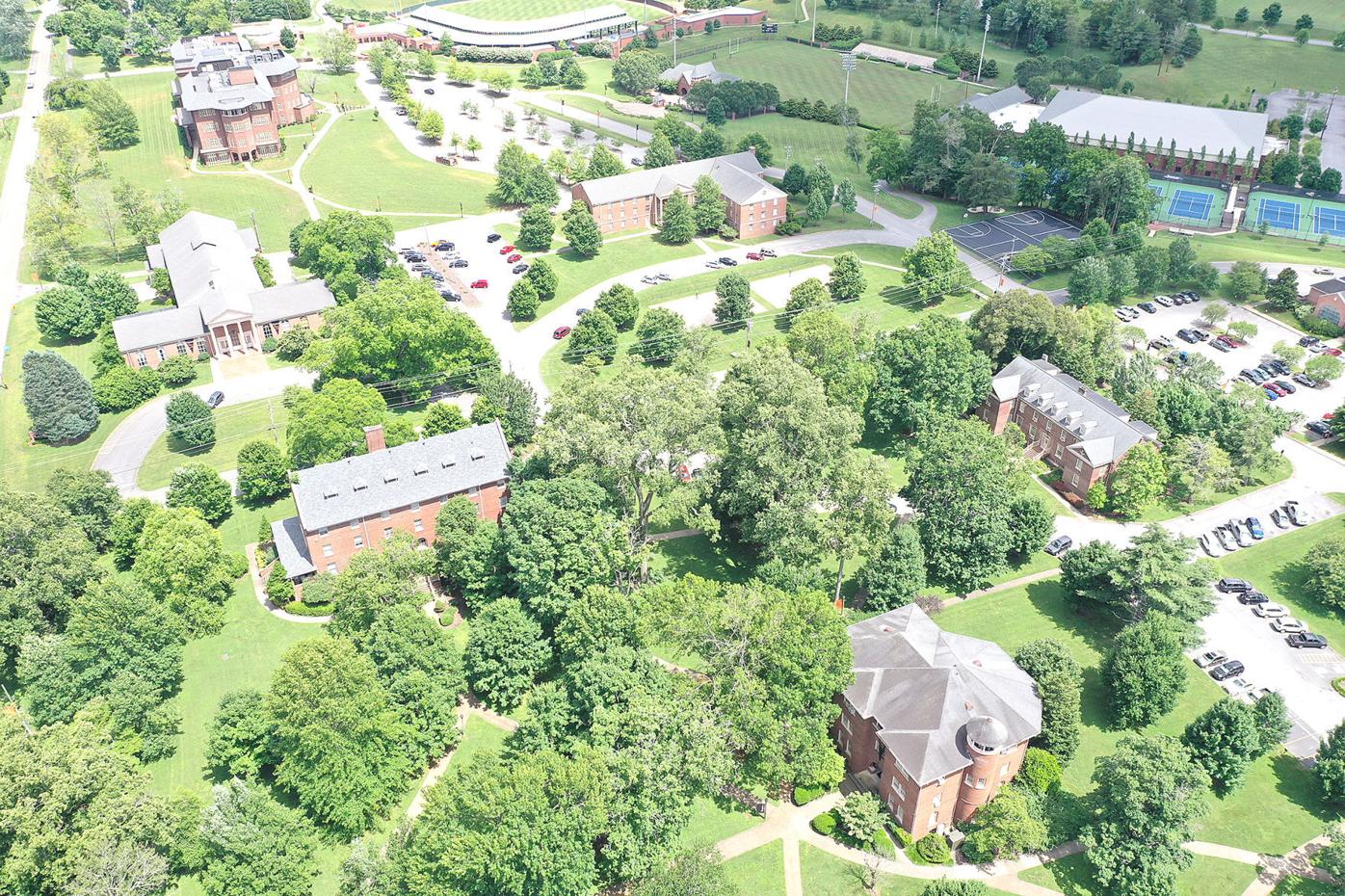 An aerial view of the 140-acre Tusculum University campus. Multiple efforts underway aim to use the natural and historical resources of the 140-acre campus to preserve its past and engage the surrounding community, while providing academic and hands-on experiential learning opportunities for its students across multiple disciplines. 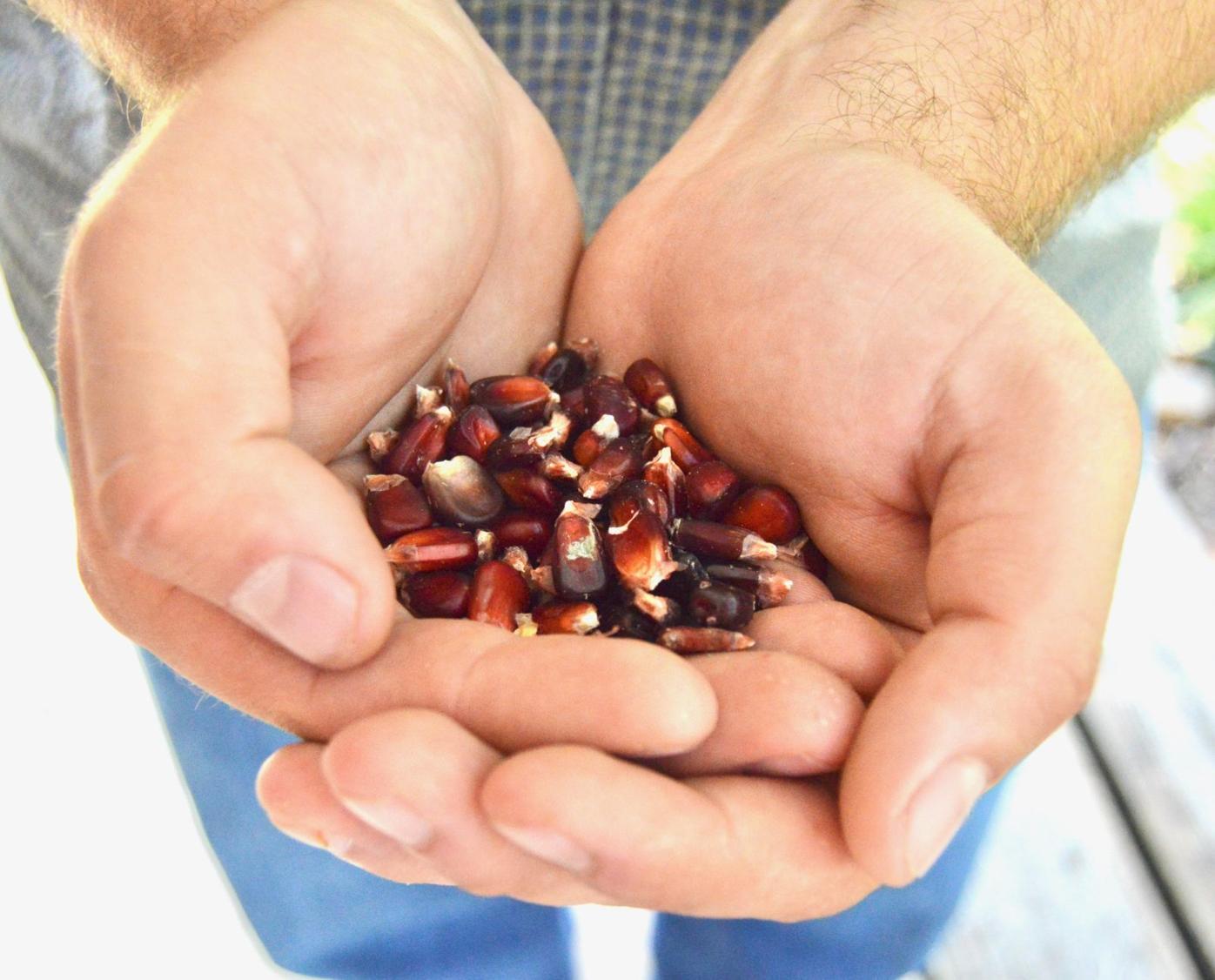 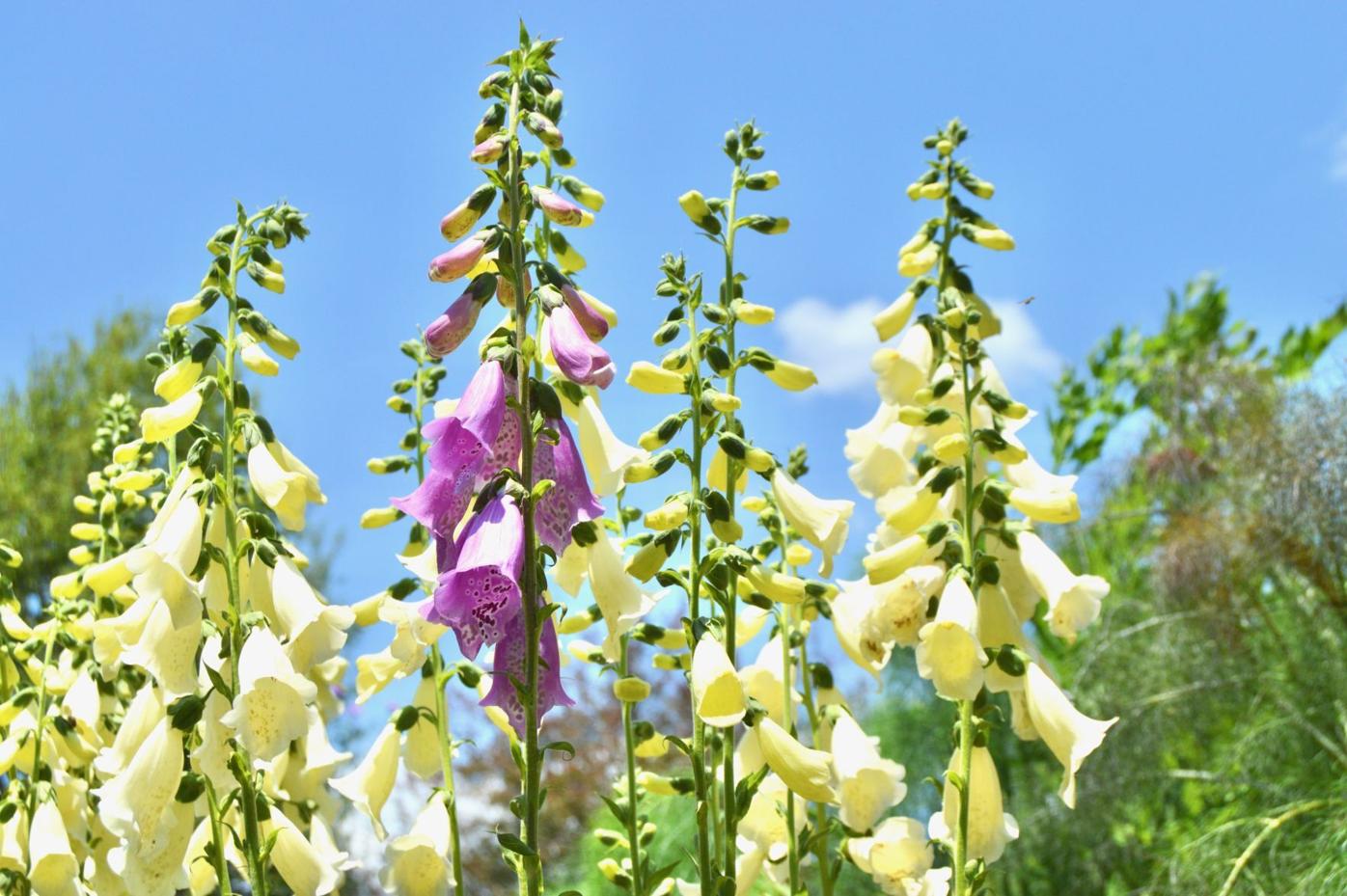 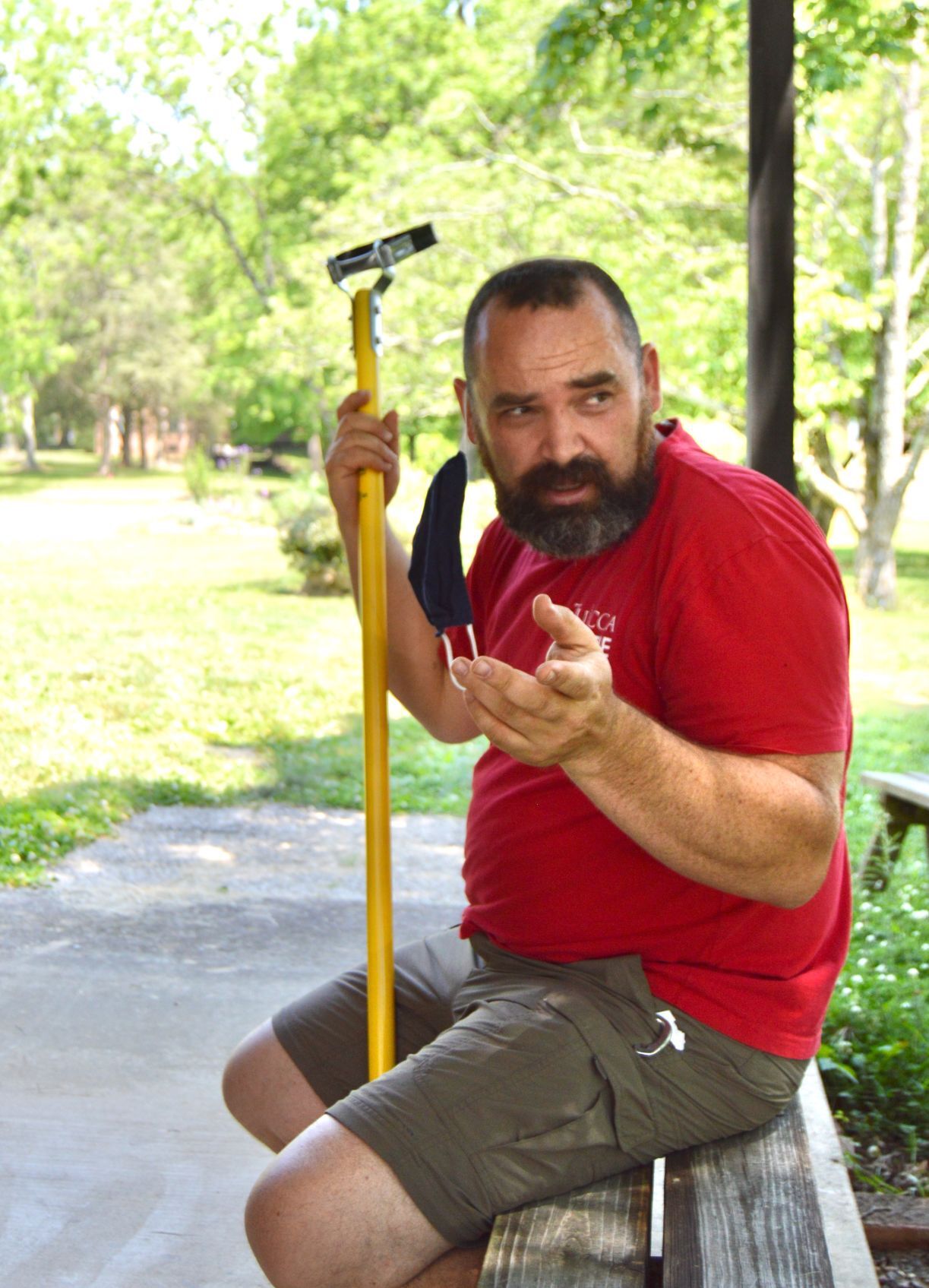 Dr. Peter Noll, associate professor of history and museum studies at Tusculum University, talks about plans to expand natural and cultivated resources on the campus.

An aerial view of the 140-acre Tusculum University campus. Multiple efforts underway aim to use the natural and historical resources of the 140-acre campus to preserve its past and engage the surrounding community, while providing academic and hands-on experiential learning opportunities for its students across multiple disciplines.

Dr. Peter Noll, associate professor of history and museum studies at Tusculum University, talks about plans to expand natural and cultivated resources on the campus.

Stepping onto the campus of Tusculum University invites an observant visitor to glimpse a long and complex twining of the Southern Appalachian landscape with its human occupants.

That history is evident in its buildings, which range from handmade brick structures from the 1800s to the modern Meen Center for Science and Mathematics, and the campus’ iconic Old Oak Tree — measuring 102 feet high, 273 feet in circumference and estimated to be 250-300 years old — that first sunk its roots into the land decades before the American Civil War.

Multiple efforts underway aim to use the natural and historical resources of the 140-acre campus to preserve its past and engage the surrounding community, while providing academic and hands-on experiential learning opportunities for its students across multiple disciplines.

Dr. Peter Noll, associate professor of History and Museum Studies, said historic sites like the Tusculum campus and its Doak House museum can become a kind of “prosthetic memory” that allows people to connect with something in their family history, especially in reference to families earning a livelihood from agriculture.

“People who lived in the past were deeply connected to landscape, dependent upon landscape in a way that is easy to forget today,” Noll said.

The Doak House is a focal point of the efforts with heirloom demonstration vegetable, herb and field gardens, and a pollinator garden, but it extends across the campus, which houses a family of owls in the pines at Treadway Hall and a host of other wildlife, to include continued development of a nature trail and riparian area along College Creek, an arboretum, a nature preserve and the Paul E. Hayden Educational Wetland.

“As you add these pieces, it also adds opportunities to drive programing,” Noll said. “One of the things we’re doing is restoring the chimneys and the kitchen of the Doak House. That means you’ve now got a working cooking hearth inside the Doak House. If you have demonstration fields and gardens, you can now start doing foodways programming. That can make for something really interesting, whether that’s for a scout group or a school program or a special program, to be able to really kind of connect those dots and show that this house is not just something that existed in isolation in the past. It was really part of an environment that was deeply interconnected, physically and ecologically, with the place that it’s at.

“Today, it’s easy to think of a family home as something that can exist in isolation. But its foundation was really rooted in the environment and relied on the environmental systems to produce economic livelihood, food, all of those things.”

Noll said from the historic crop perspective, the demonstration field garden, which is all done by hand and growing about 1/20th of an acre of corn and pumpkins this year, is comparatively small. Mid-19th century cornfields averaged 8-12 acres.

Corn grown during that time period primarily went for cornmeal for families. To make money from the crop, it was turned into pig food and whiskey.

“Early on, pre-1850s (when the railroad arrived), what you would see if you wanted to make money on your corn, you had to make it transportable, which is why they turned it into whiskey or put it on four legs and had pig drovers drive herds of swine to Cincinnati,” Noll explained. “If you wanted to monetize corn, you distilled it or turned it into pork. A lot of it got ground into cornmeal. Cornmeal was the largest, singular caloric component of people’s diets (at that time).”

The Rev. Samuel Whitherspoon Doak, namesake of the Doak House, teacher and founder of what has become Tusculum University, frequently accepted payment for his services in grain, pork and whiskey, which became the foundation of the historical economy of that era.

In addition to the open pollinated variety of corn often referred to as “bloody butcher,” and pumpkins, Noll said the garden may eventually include tobacco due to its significance to the region.

“Not so much in the 19th century, more so in the 20th century, but it’s interesting and people have a connection to it,” he said.

Coming back to the idea that developing resources drives programming, Noll said, “Once you’re growing corn and once you’re growing tobacco or pumpkins or whatever, that’s a touch point where you can engage. If you’ve got a school group here, you can take them out there and they can see it and touch it and pick it, potentially, and process it or whatever. But you can’t do any of that stuff if you don’t grow it. You can’t make any of those connections unless you do all of this work up front to have those things in the ground and growing when the school group shows up in October.”

Although the open pollinated vegetable garden is sizable by today’s standards, Dr. Susan Montelone, associate professor of biology at Tusculum, said it would not have fed a family that had children in the double digits, nor the students who were attending the school run by Doak. It would also have included many more potatoes and cabbages, which preserve well and could get them through the winter months.

“What I would really like to see in the future is the kitchen demos tied to the herb garden and vegetable gardens and show people how to cook and process (like they did) back then,” said Montelone, adding that Noll’s “strong desire is to make this space available to all of academia, any classroom that wants to participate down here.”

“We have the historic home and we want people to use that as well, for historic programs and summer camps,” Noll added.

The Doak House grounds recently hosted a concert and a fall festival is not out of the question for the future.

Jeanie Jackson, president of Eastside Garden Club, said the club won two endowment grants to put in the self-guided demonstration herb garden next to the vegetable garden. The club, founded in 1958 with an emphasis on gardening and conservation, has had a partnership with the university for many years.

Jackson describes the role of an herb garden to colonial family life as symbiotic.

“The colonials used all of those herbs for medicinals, for dying their clothes and then also for food, to make them more palatable,” Jackson said. “The medicinal part was one of the driving forces because there are so many benefits that they discovered from not only the (Native American) cultures but from their European influence. They brought a lot of things over on the ship. They wanted to be sure they’d have them.”

She added, “Everything out there has a purpose of three or four (needs) that you can use them for.”

Jackson said the club plans to have a gathering on the campus and dedicate the garden to four members lost over recent years that helped with the garden.

The garden includes mint, lovage, foxglove, dill and other herbs commonly found in 1800s herb gardens in the region.

“All these things, the bees use,” Jackson said.

Wanting to help bees and other pollinators survive led to the establishment of a pollinator garden between the vegetable and herb plots and the main campus.

The garden will also include pawpaw and persimmon trees transplanted from the creek’s riparian zone and some flowers grown from bulbs. Montelone expects to have the garden completely planted by the end of June and, in the future, placards will be installed and visitors will be able to scan them with an app for a self-guided tour.

“It’s going to become a perennial project for conservation students,” she said.

Montelone said she has seen yellow swallowtails, black emperors and “all kinds of other butterflies” on the campus. She hopes it will become a monarch way station in the future.

According to Noll, who noted the presence of fox, mink, heron, beaver, owls, salamanders, deer and turkey on the campus, the nature preserve is also a work in progress, as is the wetlands area and trail.

“Environmental science faculty have been working on restoring some of the riparian areas, planting with native trees,” Noll said. “Students and faculty have been working for the past year, putting in a nature trail through the woods along College Creek that winds back to the wetlands on campus. So really, just enhancing what’s available on the grounds. The grounds are open basically 365 days a year for the general public.”

A trail map will eventually be incorporated into an interactive digital app, and work is in progress to upgrade the arboretum’s certification level and become a national Tree Campus.

Montelone said the environmental smorgasbord is both a labor of love and an avenue to prepare students with real world experiential learning and develop the skills and the knowledge they need in order to succeed in their goals and objectives.

“It also offers faculty and students an opportunity to engage in things they have a passion about,” she said. “We love what we’re doing, and it’s exciting to see students get engaged and proud of the work they have done.”

Tusculum’s Director of Communication Jim Wozniak emphasized the university’s focus on the importance of engaging with the public.

“This is really a public facing aspect of the institutional mission,” Noll agreed. “People are welcome.”

He added, “It’s really about connections. … We want to build something that, ultimately, the community values. A community will never value a cultural or natural resource if they’re isolated from it, if they don’t see it, if they don’t experience it. We want the garden club to meet here. We want the heritage trust to meet here and the Greeneville Arts Council holding events. The more community users who use and value this as a resource to the community, the more people who have this star in their constellation of experiences, the more brightly this star shines.”

“Places like this are memory makers,” Montelone said. “They’re jewels. How fortuitous is it to have this treasure in your backyard? The history, the environmental resource, the beauty, the aesthetics, the echo of the community down through lots of different ages is really neat. I love that we have this here.”