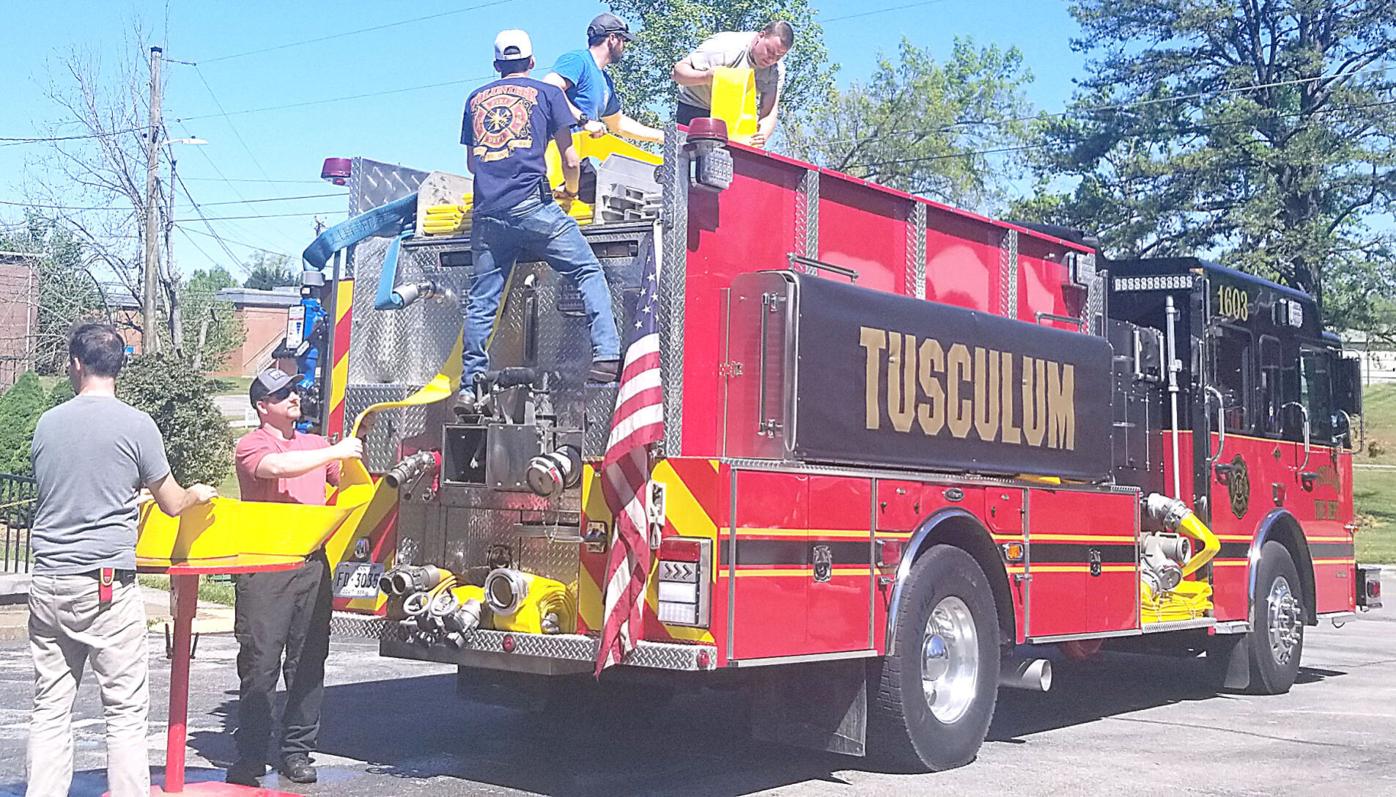 Tusuclum firefighters attach fire hoses obtained thorough a grant from the Firehouse Subs Public Safety Foundation to one of the department’s trucks. Firefighters installed the hose on Saturday. 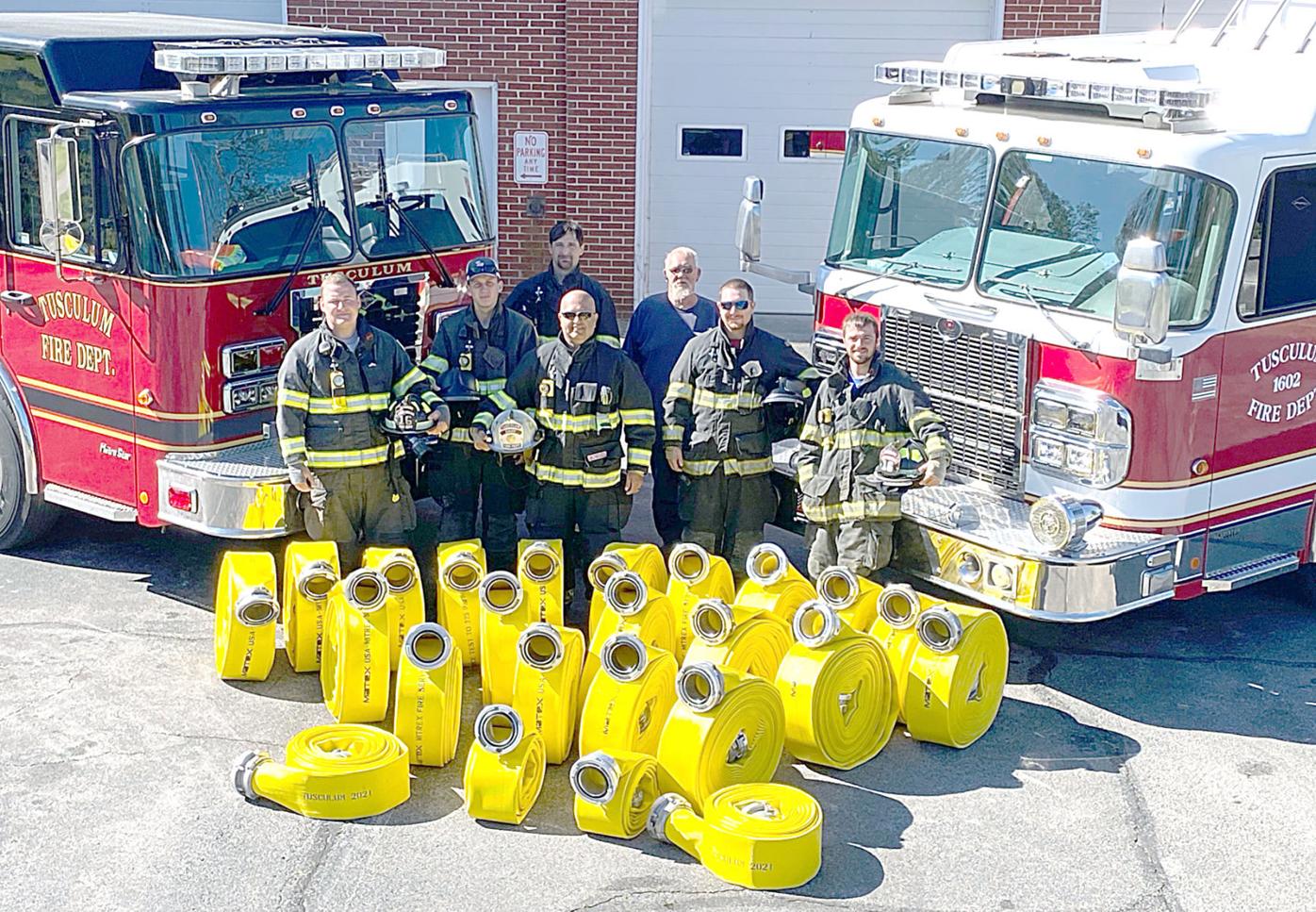 Tusuclum firefighters attach fire hoses obtained thorough a grant from the Firehouse Subs Public Safety Foundation to one of the department’s trucks. Firefighters installed the hose on Saturday.

Persistence paid off for the Tusculum Volunteer Fire Department, which recently received a grant from Firehouse Subs used for the purchase of more than 2,000 feet of large diameter supply hose.

The hoses were installed Saturday on Tusculum fire trucks by members of the fire department.

“It was only after the fourth attempt that it would be approved, delivered, and installed on the trucks one day past the two-year mark. It was a process of information gathering and waiting to see if our grant would be accepted or not,” Shelton said.

The Firehouse Subs Public Safety Foundation approved a $12,680 grant that allowed the purchase of 2,150 feet of the 5-inch supply hose, also referred to as large diameter hose, or LDH, Shelton sad.

The grant helped Tusculum firefighters “in fulfilling a critical need within the department,” a Firehouse Subs news release said.

The large diameter hose will be used to update existing hose needing replacement and add to the fire department’s capability “to bring large volumes of water to a fire scene,” the release said.

Shelton said the 5-inch is the first new hose of its type used in Tusculum.

“We always had hand-me-downs to work with,” he said.

Shelton said the grant enabled the fire department “to outfit the main two fire engines of our four apparatus with 1,000 feet on the main supply hose bed,” Shelton said.

The hoses are 100 feet per section.

“With water weighing 8.33 pounds per gallon, a 100-foot section of LDH filled with water will weigh approximately 944 pounds,” he said.

Trucks are also outfitted with 50- and 25-foot sections used to make connections.

The high visibility rubber yellow hose “is stenciled with the department’s name on it along with 2021 to indicate the year it was placed into service for testing purposes,” Shelton said.

The older hose taken off the trucks was transferred to a recently purchased rescue engine that needed additional hose length, Shelton said.

He said that with the exception of the fire department’s brush truck, TVFD trucks now have 1,000 feet of the large diameter hose that can “bring a water source to a fire scene.”

The grant was one of 96 Firehouse Subs Public Safety Foundation grants awarded to public safety organizations across the country during the most recent grant application period. The 96 grants total more than $1.8 million.

“We are committed to helping organizations such as Tusculum Volunteer Fire Department continue their lifesaving work within local communities. We are honored to be able to award this grant and do our part to ensure that Tusculum is safer for everyone, including first responders,” Robin Peters, Firehouse Subs Public Safety Foundation executive director, said in the release.

Shelton has been proactive in applying for grants from various sources to obtain equipment for the Tusculum Volunteer Fire Department. The department awaits word on one application that will enable it to purchase a fire truck.

“The department still has several grants applied for (and we are) awaiting a response to their status. We were very fortunate and have been blessed by the support we have,” Shelton said. “These types of grants allow money that is donated to go towards maintaining the department and making upgrades to provide a better service.”