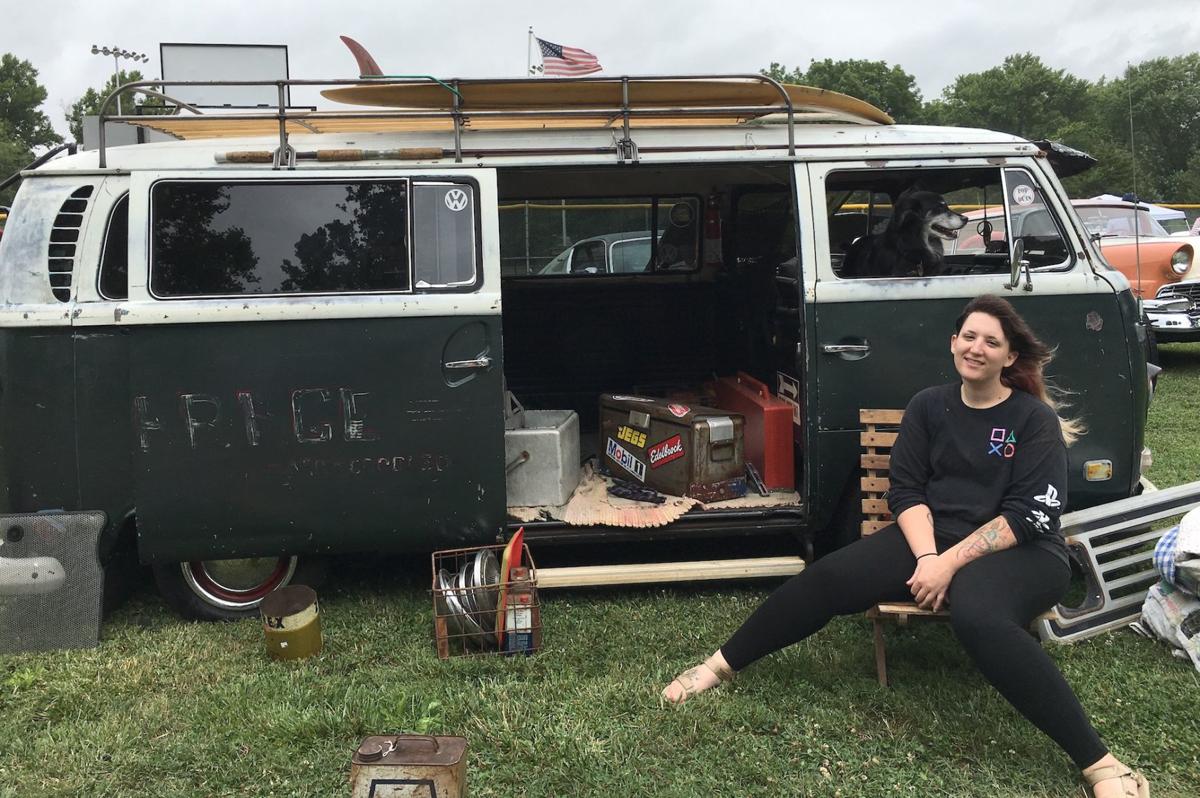 Megan Cox sits amongst some of the antiques her dad David Cox brought to sell at the Volunteer State Auto Show as the family’s dog Olive sits inside the 1970 Volkswagen bus they brought to the show. 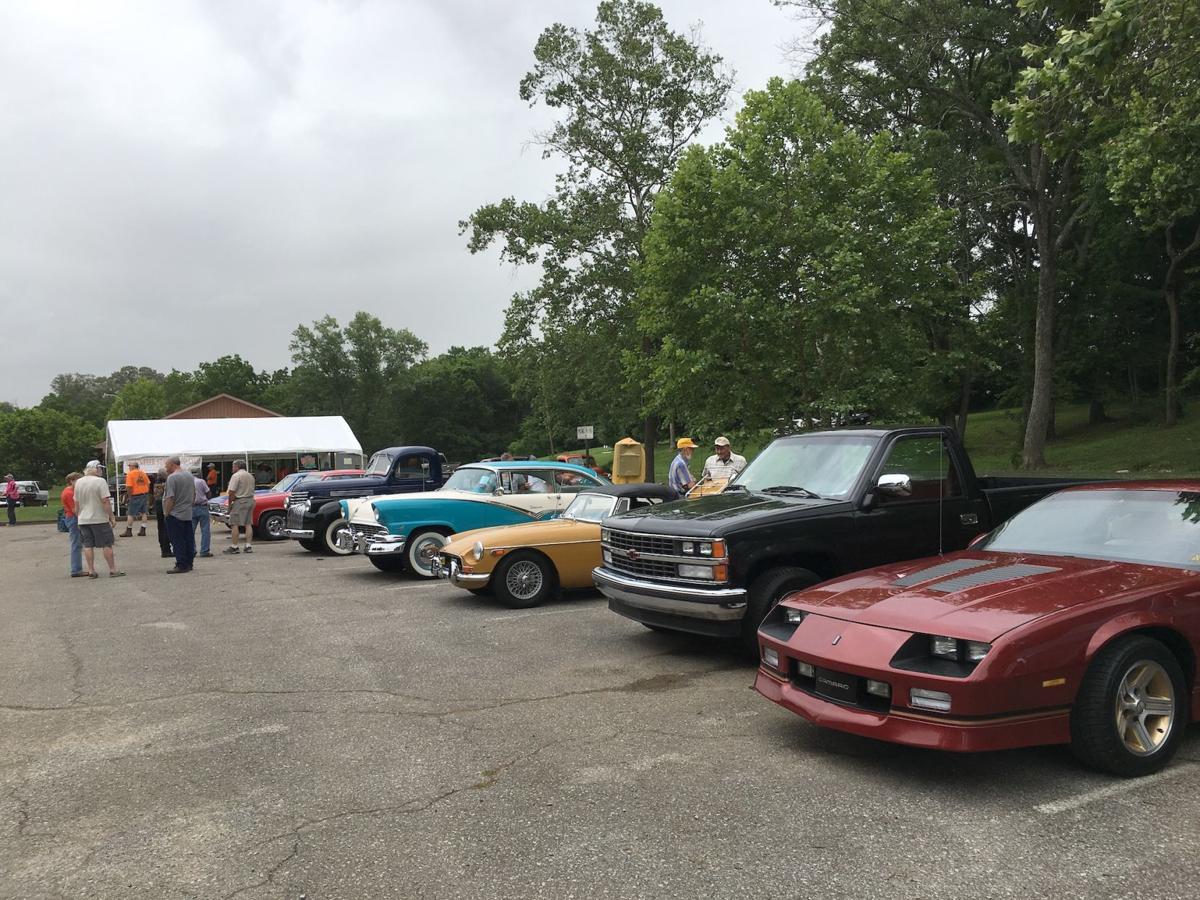 Visitors to Hardin Park on Saturday were greeted with a range of classic and customized vehicles at the Volunteer State Auto Show.

Threatening skies and occasional rain during the day did not deter those who came out for the Volunteer State Auto Show.

Megan Cox sits amongst some of the antiques her dad David Cox brought to sell at the Volunteer State Auto Show as the family’s dog Olive sits inside the 1970 Volkswagen bus they brought to the show.

Visitors to Hardin Park on Saturday were greeted with a range of classic and customized vehicles at the Volunteer State Auto Show.

Threatening skies and occasional rain during the day did not deter those who came out for the Volunteer State Auto Show.

The Volunteer State Auto Show has drawn auto enthusiasts near and far to the tri-cities area since the early 1960s, and the 30th edition of the event Saturday at Hardin Park was no different.

Despite cloudy skies and scattered rain showers for the second year in a row, club members and visitors were happy for the opportunity to get out, socialize and see some classic autos and customized hot rods in the midst of a challenging time.

“People might not want to bring their nice cars out in the rain, “ said Paul Evans, vice-president of the club and owner of a black 1940 Ford Coupe, which he brought on Saturday. “With the rain, it has been a good turnout.”

Lynn Castle came from Boone, North Carolina, in his 1962 Corvette with a fuel injected motor, which won a door prize at the show, for about the 40th year in a row, he estimated.

“I started going when they had it in a warehouse in Johnson City,” Castle said. Castle also recalled the show previously taking place downtown on Depot Street before the show took its current form it has maintained for 30 years.

Castle said bought the car a little over 44 years ago after searching for some time.

“When I bought this thing I could buy the parts I needed for it at the hardware and auto parts store,” Castle said.

In addition to the original parts, the fuel-injected motor in the car is part of what makes it so special, adding about $50,000 to the value, Castle explained.

Rather than keep it covered and locked away in a garage in a bid to ensure the value is preserved, Castle said he prefers to drive and enjoy his car.

“The good Lord was good enough to let me have it,” Castle said. “I don’t worship it, but it’s a fun little car.”

Jenny Briggs also came from North Carolina with her husband in a 1957 Ford Country Squire station wagon. Briggs enjoyed visiting with friends Judy Williams and Tammy Lane, and the women said attending car shows together with their husbands is something they often look forward to.

“It’s good to be outside,” Lane commented.

Evans said that because of the ongoing coronavirus pandemic, the club decided to make some changes to the event.

Rather than charging a registration fee ahead of the event, the club decided to waive the pre-event registration and accept donations at the event instead.

Evans said money for the prizes awarded at the event, ranging from $20 for door prizes to the $500 grand prize, all selected by club members’ picks, was donated to the club by sponsors.

“It’s been a tough year for everybody, and we’re just trying to get people together to enjoy the vehicles,” Evans said.

“We felt this year, with the current situation, we’d rather people just come out, socialize and have a good time,” said club member Artie Wehenkel on Saturday. “It has worked out well so far.”

Wehenkel said the club debated whether or not to go through with the event given the rise in coronavirus infections, but ultimately decided that the lighthearted, outdoor fun was needed.

“I like it all,” Hawkins said. “I like meeting people and looking at the cars. Every year there’s some you haven’t seen.”

Hawkins arrived Saturday with a vehicle he said he built himself.

Club president Bill Collins agreed his favorite part of the annual event is meeting the people who flock to the show as well as looking at the vehicles they arrive in. Collins brought a 1967 Pontiac GTO to the park on Saturday.

In addition to a wide variety of cars, David Cox and his daughter Megan Cox brought their dog Olive to the show in a 1970 Volkswagen bus David Cox said he received as a gift from a friend about 13 years ago. Antiques for sale, including a cooler from the 1950s, were displayed on the grass around the open side of the van.

Megan Cox said she always enjoys the car shows and antiques she grew up around and was excited to ride in the bus on Saturday.

Club members said they are thankful for the support of sponsors, which provided money for door prizes with participation in the event purely by donation.

A club member of 10 years, classic auto enthusiast and Mosheim Mayor Tommy Gregg added thanks to Greeneville Parks and Recreation for the use of Hardin Park for the event. Gregg brought a burgundy and white 1955 Oldsmobile to the show.

“We’d like to thank all the car owners and the public for coming,” said club president Bill Collins.

For more information about the Volunteer State Auto Club, visit www.volunteerstateautoclub.org or https://www.facebook.com/VolStateAuto/.