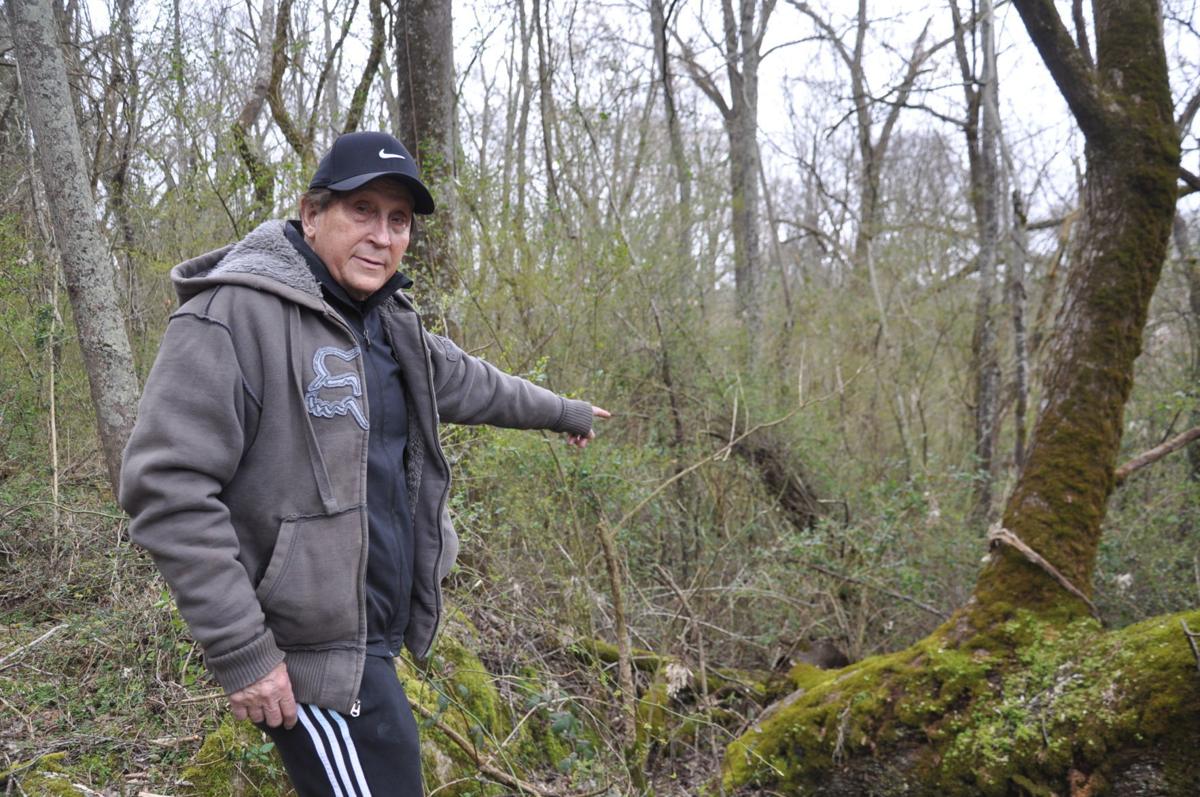 Wayne Conduff points to the location of the spring where the Link family would have obtained water. 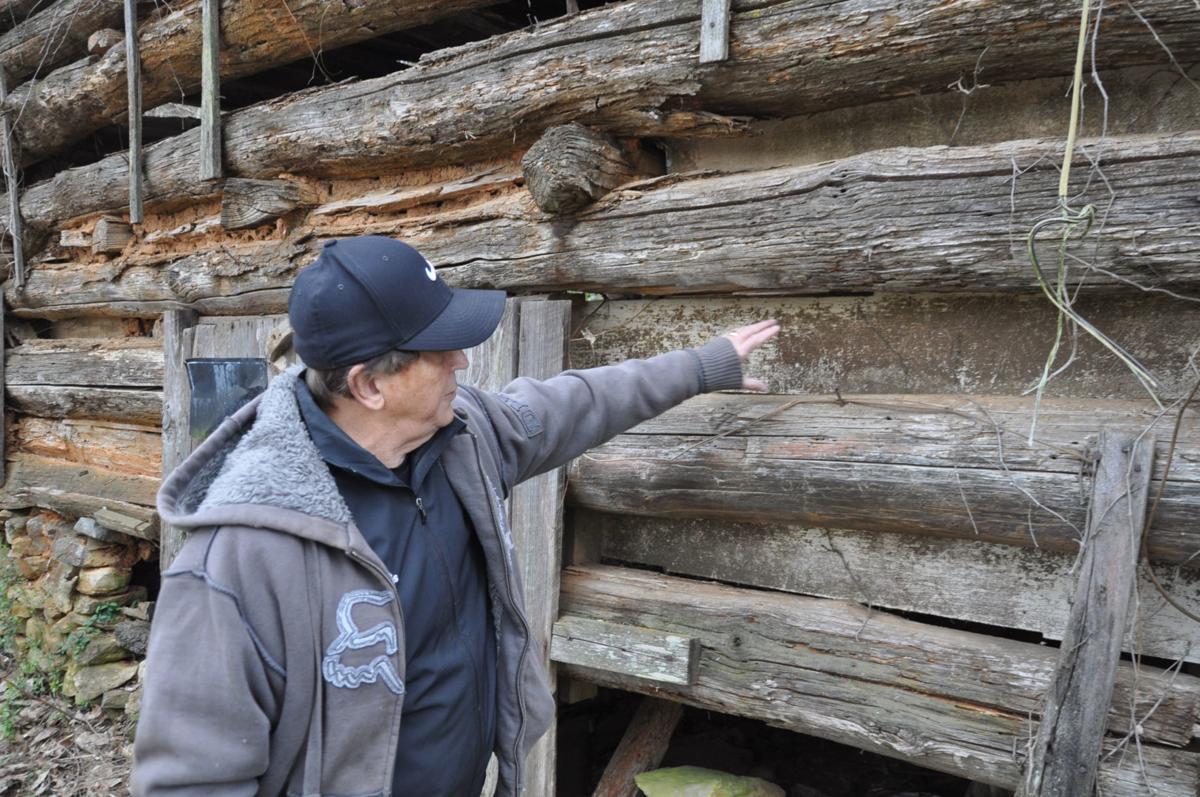 Wayne Conduff examines the original chinking in an 1840s era log barn on the property. 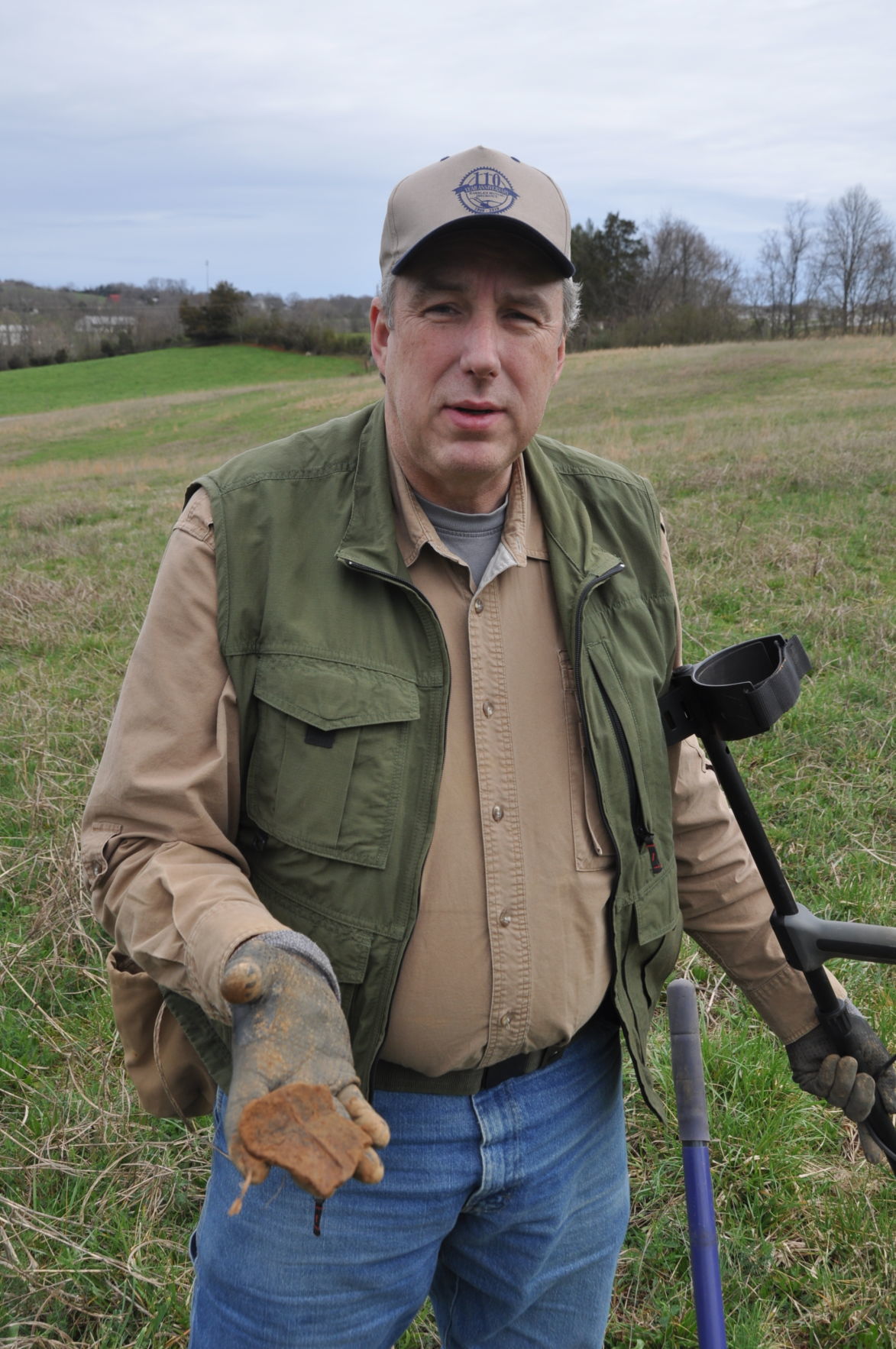 Mike Beck holds a piece of a cook pot dug on the site of the original Link home.

Wayne Conduff points to the location of the spring where the Link family would have obtained water.

Wayne Conduff examines the original chinking in an 1840s era log barn on the property.

Mike Beck holds a piece of a cook pot dug on the site of the original Link home.

No, this is not an article about big foot or ancient aliens. This is about taking a story that has been handed down, connecting it with a paper trail and then firming it up scientifically. Believe me, it is hard to do all three.

This story begins when I was growing up in the Sunnyside community living along the north fork of Richland Creek. Yes, the same Richland Creek that begins in Greeneville at the Big Spring. My father told me one time that the original Link mansion had been on our property and had burned down. He said that then they moved over near what is now the Link Hills Country Club.

My great Uncle Vern Hensley, whose farm joined ours, had a small cemetery near his house he always called “The Link Cemetery.” Everyone knows the Link cemetery is down near the tennis courts at the country club. I remember when I was a teenager, about 11 or 12, my Dad sent me with the tractor to plow up to the spot Uncle Vern wanted to sow his tobacco beds. Vern stood out there to make sure I didn’t “Get into the slave graves.” The slave graves were along the edge of the cemetery.

Now, this cemetery has no field stones and doesn’t look anything like a cemetery except it has been kept fenced off and has some large trees. It has a few sunken places but is mostly level. I know that several family members know about the cemetery. I was thinking recently that I was probably the only person living that knew the original Link mansion was over in Sunnyside — or was it?

It was time to go in search of the missing Links. The first person I contacted was my good buddy Wayne Conduff. When it comes to plotting out historic properties from the original land grants Wayne is the man.

While sharing the above story with Wayne he probably told me five times that he did not believe the Link estate ever reached over that far. I knew that if it didn’t, that was the end of the story. Wayne called me up about three days later and announced, “Tim you are right!” He had found the original land grants and sure enough, the Links owned that property. They were not the original owners but they owned it.

Wayne came over and we took the plat maps and went in search of history. We stopped where my Dad said the house was and sure enough there was a nice flat area where a house could have sat. We looked at an old log barn original to the property which still has some of the original chinking. Wayne estimated it to be from 1840 or earlier.

The tract of land went from Sunnyside schoolhouse clear over to the old Asheville highway taking in two ridges toward town. The cemetery property was dead center. I had asked Millie Hensley if we could visit the cemetery and we stopped there, too. Millie said Uncle Vern used to tease her about “A big black man buried out there.”

I had my dowsing rods and as I walked the cemetery got several hits. There was one green patch which was sunken in and I got a real strong hit as I crossed over it. I’m not sure how much faith I have in dowsing, but the late Jim Garland who was a master had me walk a cemetery in Elizabethton where he knew every grave and I got a hit on each one. Jim declared that I have “the gift” whatever that means.

Wayne had copied the original North Carolina land grant dated July 1779 made out to Frederick Whittenburg. He also had listed the successive owners of the property where the Link home was believed to have stood.

Being satisfied that both properties fell within the land grant, Wayne and I were off to the T. Elmer Cox Genealogical Library to pull some more records to fill in the paper trail. The lovely ladies at the library are always a great help and know where to find what the likes of me are looking for.

June Pinkston provided us with a copy of Frederick Whittenburg’s will probated in Greene County on July 30, 1803. Some genealogies put his death at 1804, and one even has him dying in middle Tennessee. He was a German immigrant who migrated from Rowan County, North Carolina, to this area. His son Peter and his widow remained on the property until Peter sold it to Thomas Link in 1834.

Wayne and I concluded that Frederick Whittenburg was likely the first person buried on his property and the start of the small cemetery.

The oldest daughter of Frederick Whittenburg, Margarete, married the Rev. Stephen Brooks and sister Mary married Thomas Brooks. The Brooks family is one of the oldest in the Sunnyside community. Daughter Elizabeth married Isaiah Harrison, another old Sunnyside family. Peter Whittenburg was married to Mary “Polly” Earnest, the daughter of the Rev. Felix Earnest of Chuckey, where they were married Jan. 23, 1809.

As June and Wayne both noted, the Whittenburgs were only thought to have been in the lower end of the county.

Thomas N. Link owned the property from 1834 to 1840. As best I can determine, living with Thomas was his father, John Ephraim Link, said to be a veteran of the War of 1812. An article about the Links says, “It is said Captain John Link died here (Greene County) on July 31, 1851. His burial place is not known.”

I think there is little doubt that if John Link died on the property, he was buried on the property. It already had a cemetery on the hill. I also think that is why Uncle Vern Hensley called it the “Link Cemetery.”

Ephraim Link owned the property from 1840 to 1854. In the 1850 census is listed two slaves. One male is age 81. He is not listed with the Links when they moved to the area of the country club after 1854. He is likely the “big black man” that Uncle Vern teased Cousin Millie about. We now have three likely burials in the cemetery. When I dowsed the cemetery, I got 17 “hits” in the first row and 11 in the second. I always had in my head there were 30 graves there. What about “The slave graves” that I, my uncles and cousins plowed around? Wayne estimated there could be several more graves in the fenced off area.

One of my cousins recently told me she had heard there might be a Cherokee burial ground on this farm in addition to this cemetery. Could this have been a native American burial place with graves added later by whites? Wayne and I discussed this and both agree we have never seen a Cherokee cemetery that was not near a river. The rivers were their highways and that is where they lived, burying their dead nearby. It is unlikely there were Cherokee buried here.

We now had proof the Links had lived on this property for 20 years. The next step was to determine if there was a Link mansion that burned. A “mansion house” at this period was likely of log construction and would have left little behind since the soil had been disturbed for generations. Log houses of two or more rooms were referred to as “mansion houses” and not the elaborate ones that we think of today. The Links would have scoured the ashes for any valuables. The best we could find was maybe a few hand forged nails if anything. I had my hopes up for a Spanish coin prominent at the time or a “piece of eight.”

Another give away would be a stone chimney and since the land has been farmed heavily it would have been removed. An 1880 house nearby does have a nice flat limestone walkway. These stones have been worked to fit nicely as in a fireplace. I am thinking these are the remains of the original fireplace.

I asked another good friend, Mike Beck from Morristown, if he would survey the area where the home was likely located with a metal detector. Beck has been detecting since 1974 when Bob Hurley wrote about him and some of his finds.

Surveying the area where the house was likely located, we found three pieces of an iron cooking pot estimated to be from the late 1700s to the early 1840s. We found several iron hand forged nails too. From our findings it is safe to assume this area had been inhabited over 200 years which coincides with our paper documentation.

Going out on the perimeter, Mike found an unfired Confederate Enfield rifle bullet. A few feet away we found the back of a Civil War uniform button. That was the last two things we expected to find. Efraim Link was a Confederate soldier, but he moved away six years before the war. Given the distance between the two roads at the time, it is likely a cavalryman was passing through, or a foraging party was in the area. When Longstreet was in Greeneville in 1864, foraging parties were sent out in all directions and could have easily covered this area as they went as far out as Camp Creek. As Beck pointed out, somebody could have had them as souvenirs like we do today and dropped them or threw them away.

The property was sold by Link to Edward Sevier in 1854. Sevier was the son of Valentine Sevier and lived across the street from George Blanks’ Doughty Hall. Sevier sold it in 1859 to Linda Ripley, who sold it in 1866 to Samuel Hawkins. Samuel Babb owned it in 1871 and sold part to Steven K. Brooks, who sold it to Sarah Babb in 1877. Samuel Brooks owned it in 1882 and M. J. Brooks in 1897. This is just the area where the homesite was. Over time it shrank from 240 acres to 26.

As in any historical investigation, there are still questions to be answered and some may never be. It does prove that a story I heard as a youngster has proven to be true with aged documents and some modern technology. All the properties mentioned in this article are private properties and should be respected. I had told Don Miller several times over the years, when he was at the Cox library, I knew the location of a cemetery not on the Greene County Cemetery list. I did not have permission to do so and was not sure how my cousins would feel about my revealing its location.

Now we have some probable names to go with the graves and hope it will continue to be protected and be officially recognized.