Benchmarks_b
Several Uncontested Races Were On The Ballots In 2016

Greene County’s general election on Aug. 4, 2016, was part of a mixed bag of elections that also included the state and federal primary and municipal races in Mosheim, Baileyton and Greeneville.

There was an abundance of uncontested races on the ballots.

Races in the Baileyton, Greeneville and Mosheim municipal elections were all uncontested.

In the federal Democratic primary, Alan Bohms, of Greeneville, ran unopposed and was to face the winner of the Republican primary and independent candidate Robert Franklin in the Nov. 8 General Election.

U.S. Rep. Phil Roe, R-1st, would go on to retain his strong lead in the Republican race for his seat with 3,869 votes in Greene County to Clint Tribble’s 857. Democrat Bohms received 525 votes.

Roe won the Republican nomination with a strong majority of votes across counties of the 1st Congressional District and went on to win the general election in November.

In the 11th district Republican primary race for the state House, Rep. Jeremy Faison retained his seat with an easy win of 512 votes in Greene County over Michael McCarter’s 110. In the Democratic primary for that race, Marjorie Ramsey defeated Roland Dykes 42 to 21.

Faison and Ramsey won their parties’ nominations. They were top vote getters in their respective primaries in Cocke, Greene and Jefferson counties. Faison later cinched the win in the November general election.

No candidates filed petitions to seek a Democratic nomination for the 5th District State Representative seat.

On election day, Arrowood took the victory, with 418 votes to Morrison’s 330.

Republican nominee Paul Burkey was unopposed to fill the unexpired 7th District Greene County Commission seat he has held since being appointed following the resignation of Hilton Seay.

Incumbent Assessor of Property Chuck Jeffers, a Republican, faced no opposition in his bid for reelection.

Republican nominee Steve Lowe had no challengers in his run to fill an unexpired term as 2nd District constable.

In the Town of Baileyton Municipal Election, incumbent mayor Tommy Casteel had no challengers.

Ken Bailey and David L. Shell were unopposed in their bids to fill two seats on the Baileyton Board of Mayor and Aldermen.

In the Town of Greeneville Municipal Election, incumbent mayor W.T. Daniels was unchallenged.

In the Town of Mosheim Municipal Election, incumbent mayor Thomas L. Gregg Jr. was unopposed in his re-election bid.

David B. Myers was also unopposed in his bid to fill an unexpired term as a 2nd Ward Alderman. 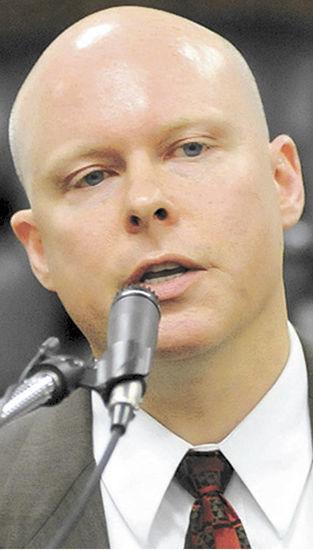 The 2016 election year in Greene County brought something new to the table: an option by which voters could okay a fundamental change in the way county government operates.

The goal of those who launched the effort was to make Greene County into what would have been only the third “home rule charter county” in Tennessee. Knox and Shelby counties are the only ones in the state with that form of government.

The Greene County Charter effort did not succeed at the polls, but the work of its proponents included grassroots advocacy and volunteer efforts to raise awareness of the cause.

Whether awareness of the charter effort included an accurate public understanding of what it was all about, though, was unclear at the end of it all. Anecdotal evidence arose that some who had heard of the charter effort, or seen its roadside signs, thought the “charter” term referenced charter schools or even the Charter television cable company.

A petition drive to form a Greene County Charter Commission was concluded in December 2013, and early the next year public rallies in support of the effort became frequent events, sponsored by groups such as Citizens for Greene County Home Rule.

The commission was established and began meeting in May 2014 following the passage of a referendum calling for the formation of a body to develop a governmental charter for the county.

The charter commission met regularly for nearly a year to develop, review and edit the document.

Key provisions focused on preventing conflicts of interest as defined by the charter. It included language prohibiting members of the county commission from debating and voting on items for which they have a conflict.

An example of a conflict in charter terms would have been a county commissioner who works for the Greene County Sheriff’s Department casting a vote on the county budget, in that the department in which he or she is employed is funded through that budget.

Similarly, a commissioner employed as a clerk in the clerk’s office, or whose child worked in that role, would not have been allowed to cast a budget vote.

The charter also called for the formation of an Ethics Committee made up of nongovernmental individuals appointed by the county commission to investigate ethics allegations made against county officials, employees and agents.

Provisions in the charter were aimed at making it more difficult for the county commission to increase taxes. The charter stated that any increase in property taxes or the county’s wheel tax rate must be approved by a two-thirds majority of the full commission at two consecutive meetings.

Language in the charter would have consolidated the county’s financial management. This means that all government budgets or funds would be under the supervision of a single financial department.

The document allowed for the charter to be changed by citizens through petition drives. These drives, if successful, would have seen initiatives placed on ballots and the proposed changes decided by Greene County’s voters.

Members of the charter commission and others argued for the plan in ever more public ways as the 2016 election neared.

Cobble, as chairman, became the leading spokesman, with support from other members including Johnson and Houser, both of whom made videos arguing in favor of the plan. The videos were posted on social media, including a Facebook page devoted to the charter effort.

The page still exists and the videos and other material may still be accessed.

Opposition to the charter concept arose as well, though in a less organized fashion. Anti-charter road signs existed, but in much lesser number than those favoring the new plan.

Waddle’s opposition to the charter roused attention due to his membership on the charter commission. He placed advertisements critical of the proposal in The Greeneville Sun and was publicly outspoken about his opinions.

Charter advocates usually presented that governmental form as one that was more directly responsive and empowering to citizens, removing perceived conflicts of interest on the part of government officials and providing change mechanisms.

Opponents cited aspects of the plan as overly limiting due to how the charter defined conflicts of interest. An employee of Greene County, for example, who was elected to the county commission, would be blocked from voting on budget-related items coming before the commission.

This would be the case, charter critics noted, even though those people were elected by voters fully aware of their employment status but desirous of placing them in office anyway.

The early voting period before the August election provided a public platform for the debate that was utilized most extensively by charter proponents, who used volunteers near the Greene County Election Commission office to hand out flyers urging support of the charter.

Opponents used media, both traditional and social, to make their case, but generally lacked structured organization.

When the election occurred, the opponents prevailed. Greene County voters rejected the charter proposal with 3,668 votes against it to 1,989 votes in its favor.

Hensley was a businessman, conservative activist and Century 21 broker/owner.

The commission appointed a replacement for Hensley, but the public voted another man into Hensley’s former post in a subsequent election.

Hensley, first elected to the commission in 2010 and reelected in 2014, had announced in November 2015 that he had been diagnosed with pancreatic cancer. The disease claimed his life only weeks later. He was 62.

In March, the Greene County Commission appointed Kevin Morrison, a former commissioner, to fill the vacant 2nd District seat on the county commission. He was one of three who had applied for the spot on the county’s legislative body.

Morrison, a sales representative with a pharmaceutical company, had served two prior terms on the county commission. He was first elected in 2002 and was re-elected in 2006. Morrison also made a bid for county mayor in 2010 but did not win.

Joshua Arrowood and Walter R. Johnson were the other two individuals who had submitted applications ahead of the March 11 deadline to be considered for appointment.

At the time of the appointment, Morrison described himself as a social and fiscal conservative and “staunch believer in limited government.” He cited his prior experience on the commission as good preparation to fill the vacancy.

Morrison was appointed to hold the seat at least through the August General Election, when the seat would appear on the ballot. Each of the two major political parties originally planned to caucus to select a candidate, though the Democratic party later opted not to caucus due to a lack of Democrats interested in the position.

The candidate elected in August would go on to complete the remainder of Hensley’s unexpired term, which runs through 2018.

Morrison actively served in his appointed role and expressed hope that he would become the GOP nominee for the general election. However, on April 5, Republicans caucused at Chuckey-Doak Middle School and instead selected Joshua Arrowood, of 295 Crockett Timbers Road in Limestone, as the Republican nominee for August.

Arrowood was one of the two passed over in giving Morrison the appointment.

“I was happy to get the nomination,” Arrowood said after the caucus. “I was glad to have so many supporters who had come out to help me. Moving on, I’m going to work hard going into the August General Election to try to get the voters throughout the 2nd District to support me.”

Arrowood was the sole candidate nominated during the caucus, which was open to Republicans registered to vote in and residing within the Chuckey and Chuckey-Doak voting precincts. His wife, Candice Arrowood, made the motion for his nomination.

Arrowood received 16 votes in his favor, with one person passing on the vote. Morrison did not attend the caucus.

However, he was not ready to drop out of the political fray. Morrison declared as an independent candidate and faced off against Arrowood in August.

Arrowood won the August race with 418 votes to Morrison’s 330.

The only other commissioner race in that election was in the 7th District, which had a vacant seat due to the 2015 resignation of Hilton Seay.

At its Sept. 2015 meeting, the Greene County Commission had appointed Republican Paul Burkey to fill the vacancy left by the resignation of commissioner Hilton Seay. Burkey ran unopposed to retain that seat in August and received 574 complimentary votes. 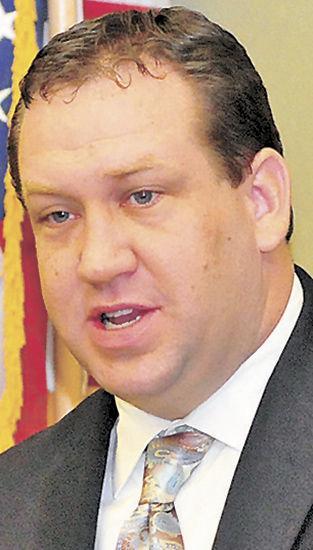 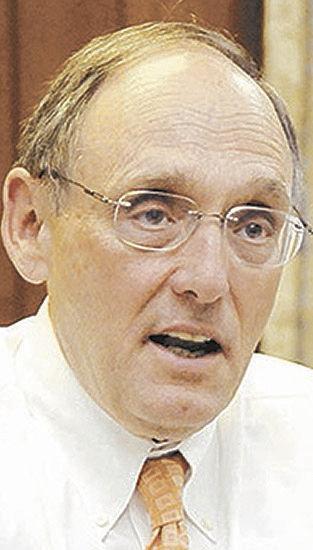