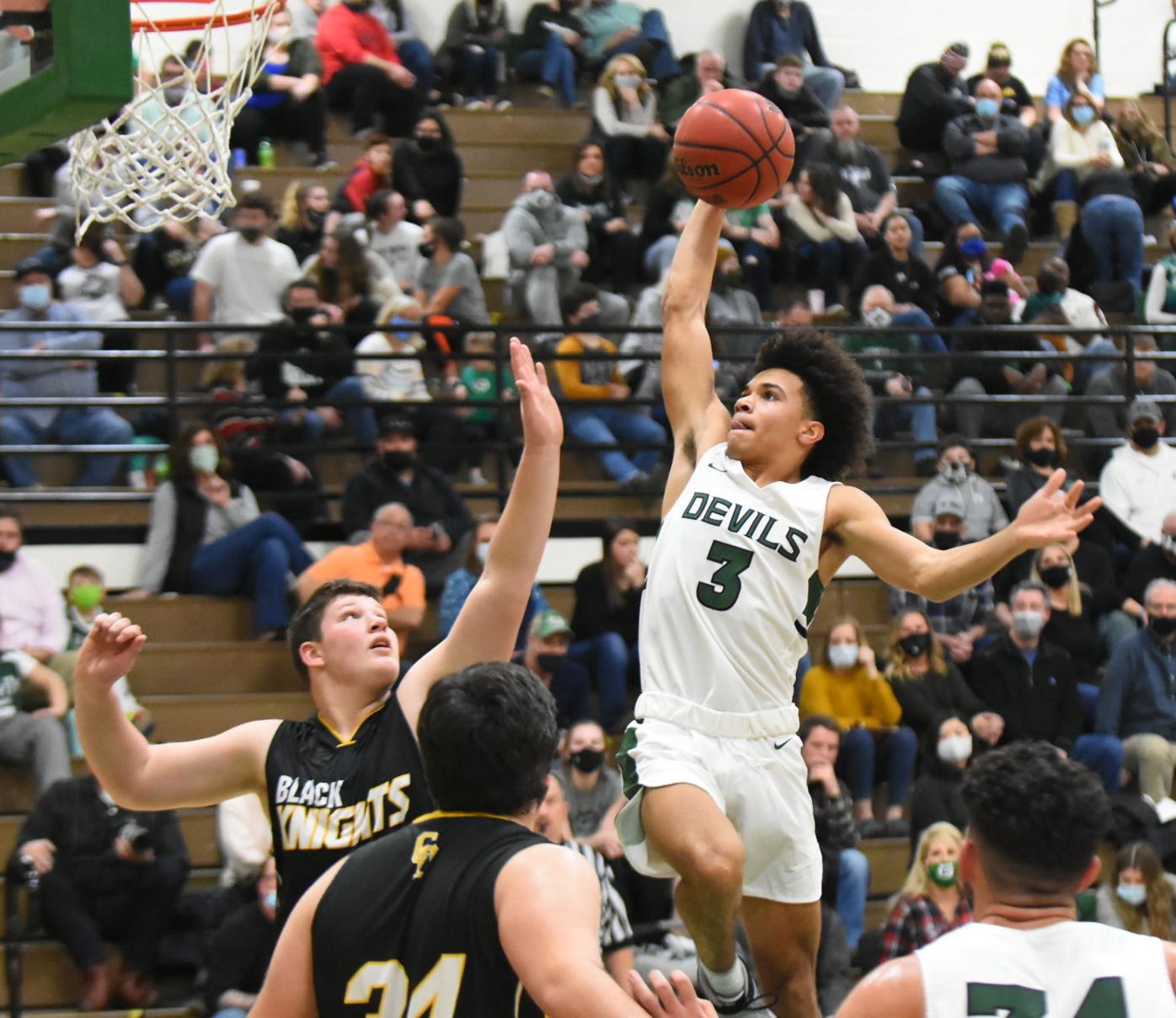 Greeneville’s Jakobi Gillespie (3) goes up for a dunk on Saturday as Chuckey-Doak’s Christian Derry tries to defend. 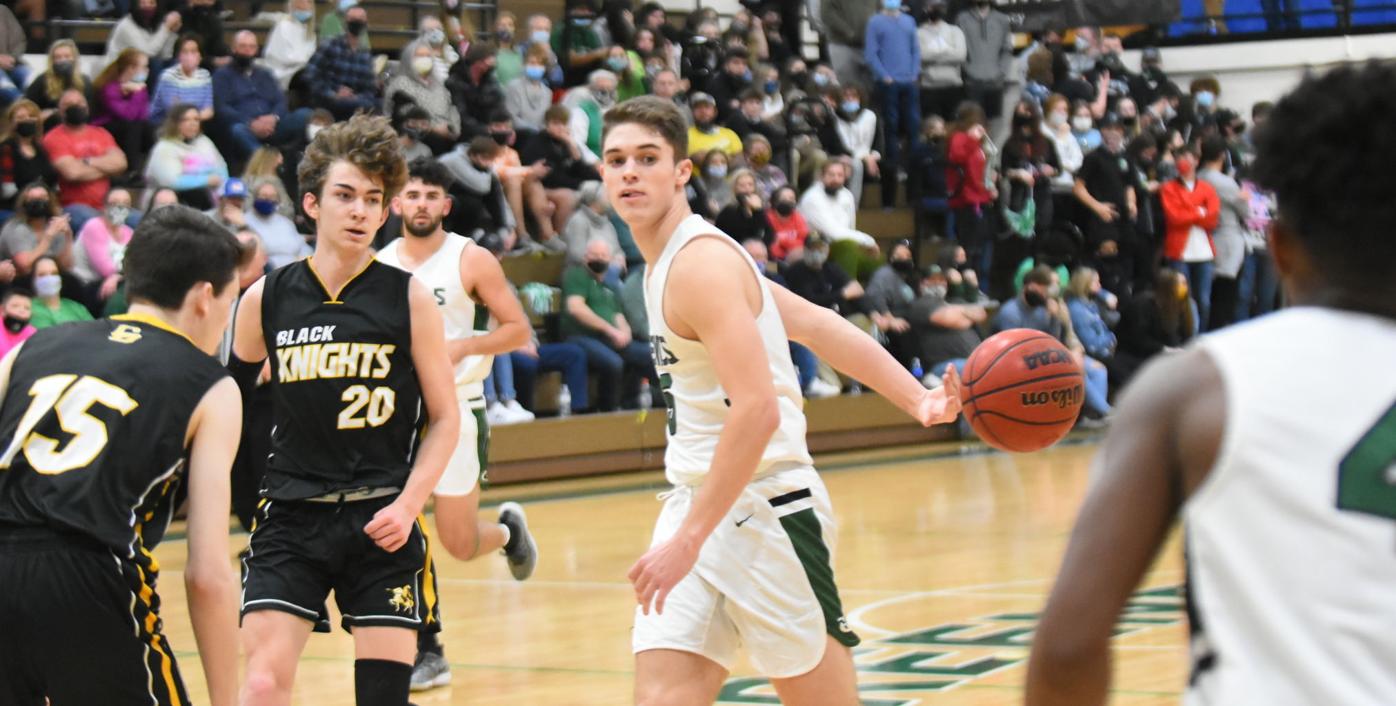 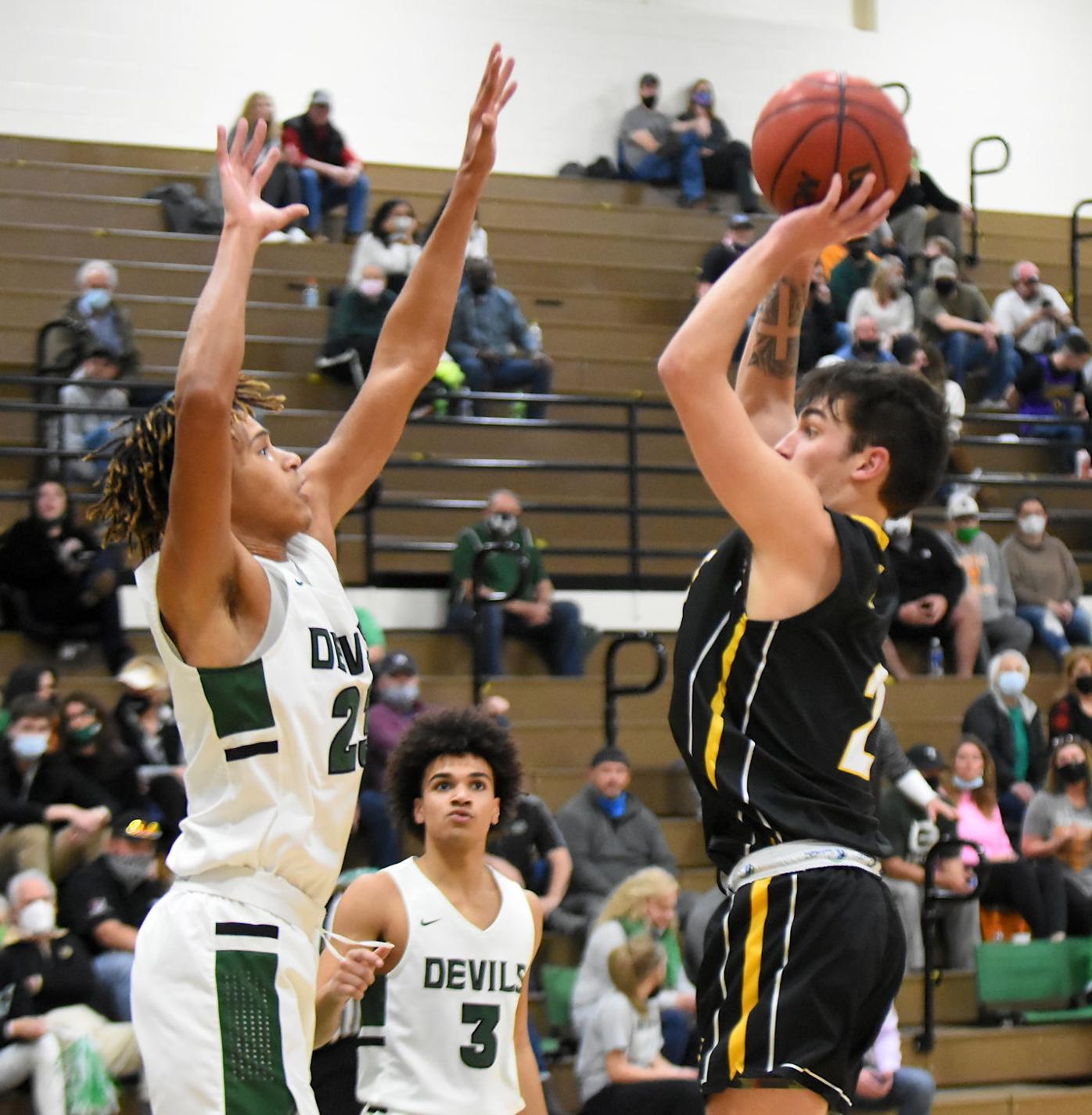 Greeneville’s Jakobi Gillespie (3) goes up for a dunk on Saturday as Chuckey-Doak’s Christian Derry tries to defend.

The Greeneville boys started the postseason in style on Saturday night with an offensive explosion.

The Devils took down Chuckey-Doak 94-56 to advance to the District 2-2A championship game on Tuesday.

“We were able to jump out on them early, and it started from the first possession,” Greeneville coach Brad Woolsey said. “Chuckey-Doak did fight back, they never stopped fighting, but our guys kept playing even when some shots weren’t falling. I’m just really pleased with this effort.”

Greeneville started so fast the Black Knights hardly had time to get turned around between baskets as the Greene Devils stormed to a 21-3 lead with 5:12 left in the first quarter.

Greeneville held an 11-0 lead 1:28 into the contest after a 10-second stretch that saw the Greene Devils score six points. It started with a pair of free-throws from Satterfield. Grove then stole the inbounds pass and moved it to Connor DeBusk for a layup. Jakobi Gillespie stole the next inbounds pass and took it down the baseline for two more points.

After Tyler Ramsey broke the streak with a trey for the Knights, Greeneville scored the next 10 points in 1:03 with Gillespie and Satterfield each hitting from deep to push the lead to 21-3 less than three minutes into the contest.

“Twenty one points in three minutes is a lot,” Woolsey said. “That was a great way to jump out in tournament time. That is how we want to play, we want to play fast. We want to get shots, and when they are going in it makes everything look good. Now, when they aren’t going in we have to focus on rebounding and not just be satisfied with getting the shot.”

Over the remainder of the first quarter, Chuckey-Doak’s offense kept pace with Christian Derry scoring six points as the gap narrowed to 26-15.

Over the final 1:38 of the quarter, Adjatay Dabbs sank a pair of 3-pointers and DeBusk put in another to push Greeneville’s lead to 35-19 at the close of the period.

In the second quarter, Gillespie got Greeneville going with a breakaway dunk that he turned into a three-point play for a 40-19 lead.

Gillespie led the Devils on Saturday with 33 points. He did so in efficient fashion as well, shooting 10-of-12 from 2-point range and 3-of-5 from 3-point range.

“Jakobi looked really good tonight,” Woolsey said. “He got in the open court, and he knocked down some threes. One thing that may not be as noticed is his effect defensively. When he is on the ball, he makes it hard for their point guard to get where he wants to get.”

Chuckey-Doak kept pace using triples from Ramsey and Cadin Tullock before Greeneville closed the half on an 11-0 run.

Satterfield started the run with a pair of transition layups and Gillespie finished it by leaping through traffic for another powerful jam that put Greeneville in front 59-27.

Satterfied finished the night with 20 points. Dabbs had 11 points and Grove grabbed 12 rebounds.

Derry scored Chuckey-Doak’s first eight points of the second half to close the gap to 64-35.

Greeneville answered with a 12-2 run that pushed its lead to 76-37 with 3:10 remaining in the third quarter.

Satterfield scored four in the stretch while Gillespie put in six points, all on breakaway plays.

The quarter ended with Greeneville leading 83-42.

Ramsey finished the night with 16 points for the Black Knights.

Greeneville advances to the District 2-2A championship game where it will host Grainger at 7 p.m. Tuesday. Chuckey-Doak will go to South Greene on Tuesday for the third-place game.