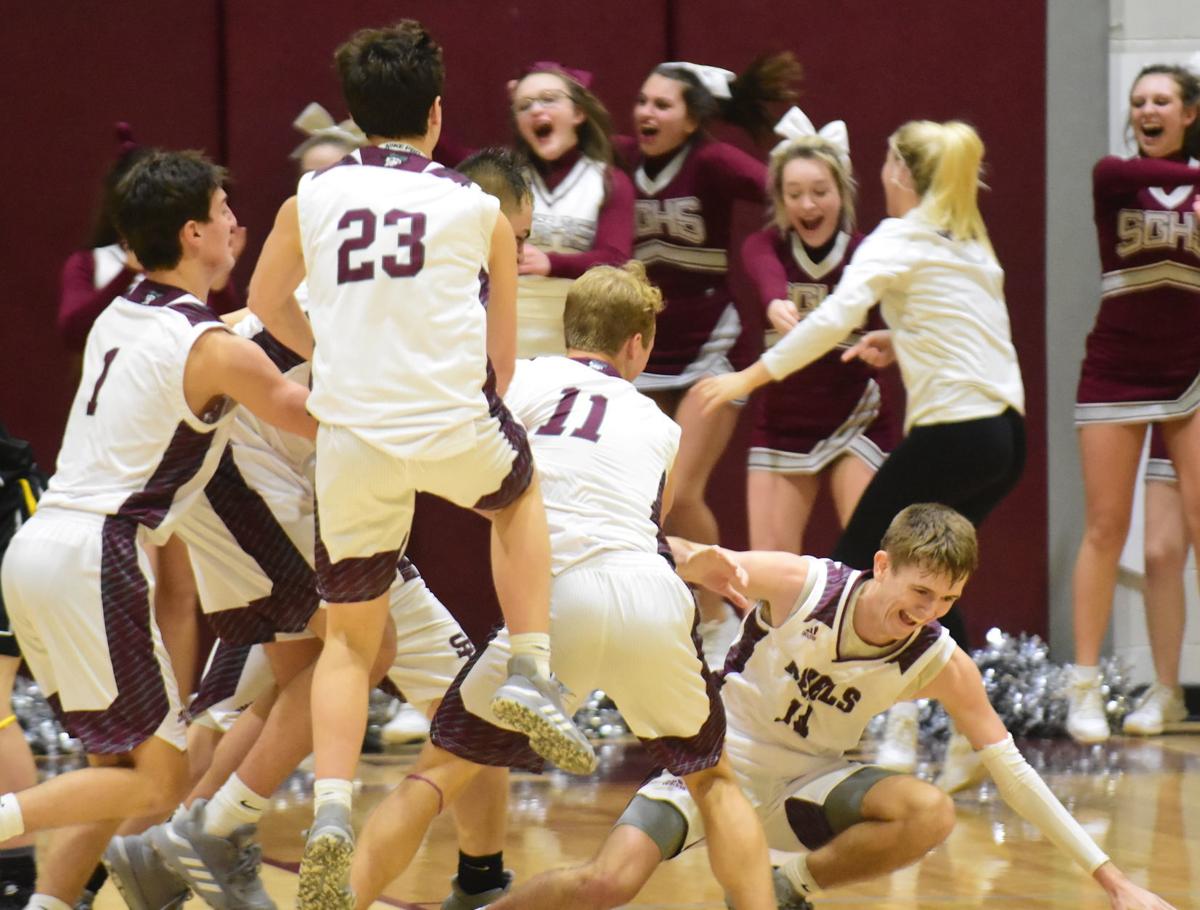 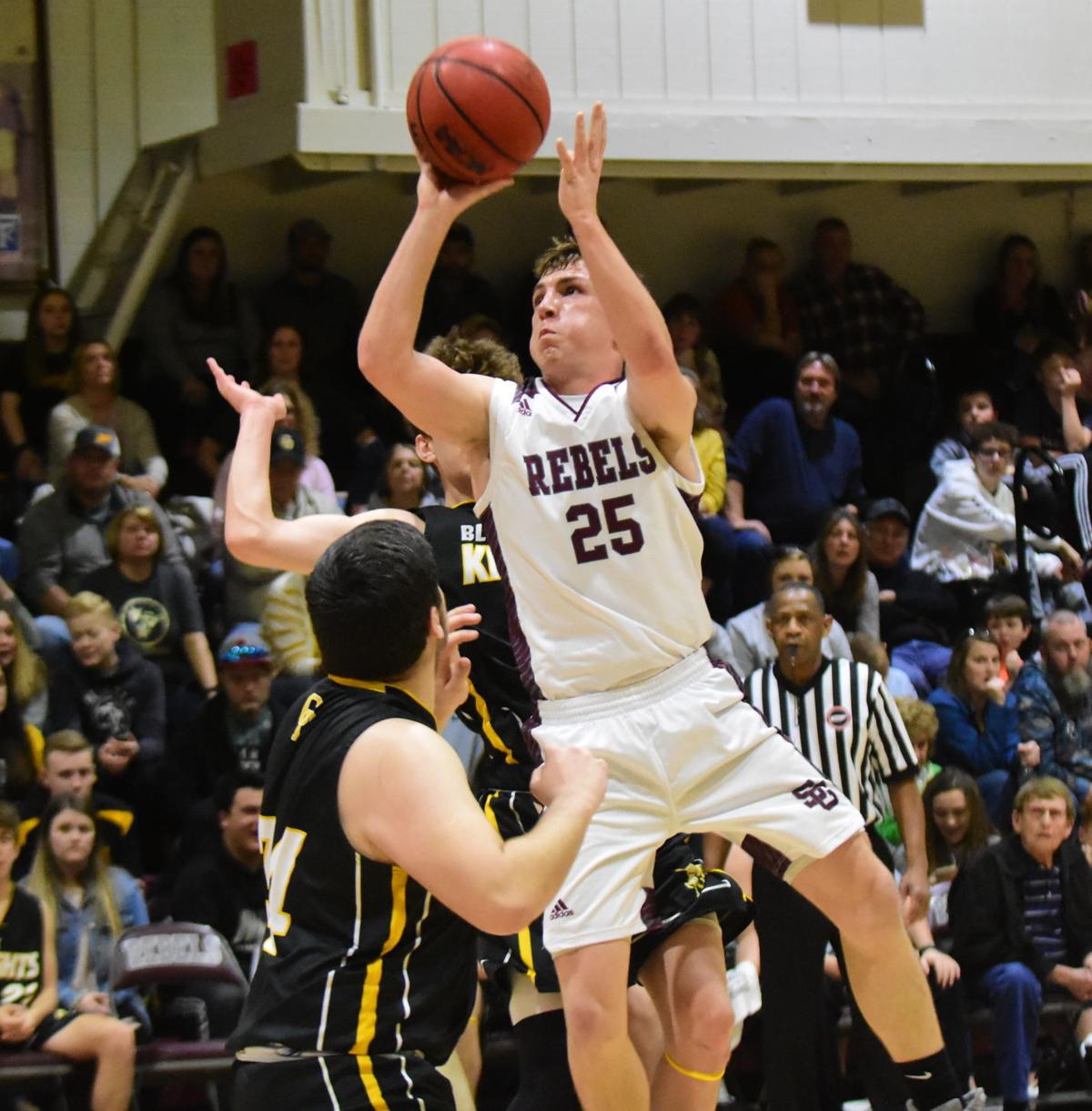 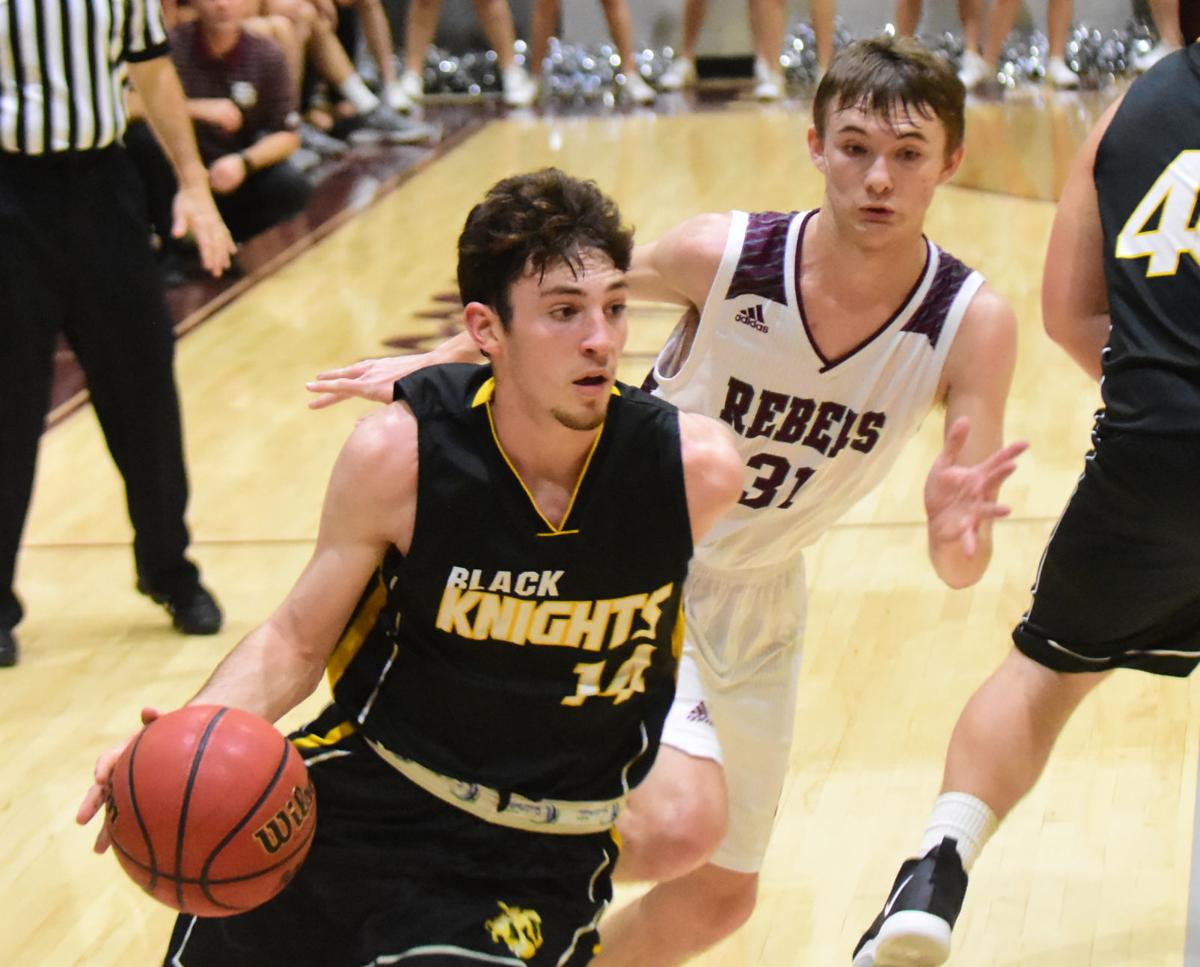 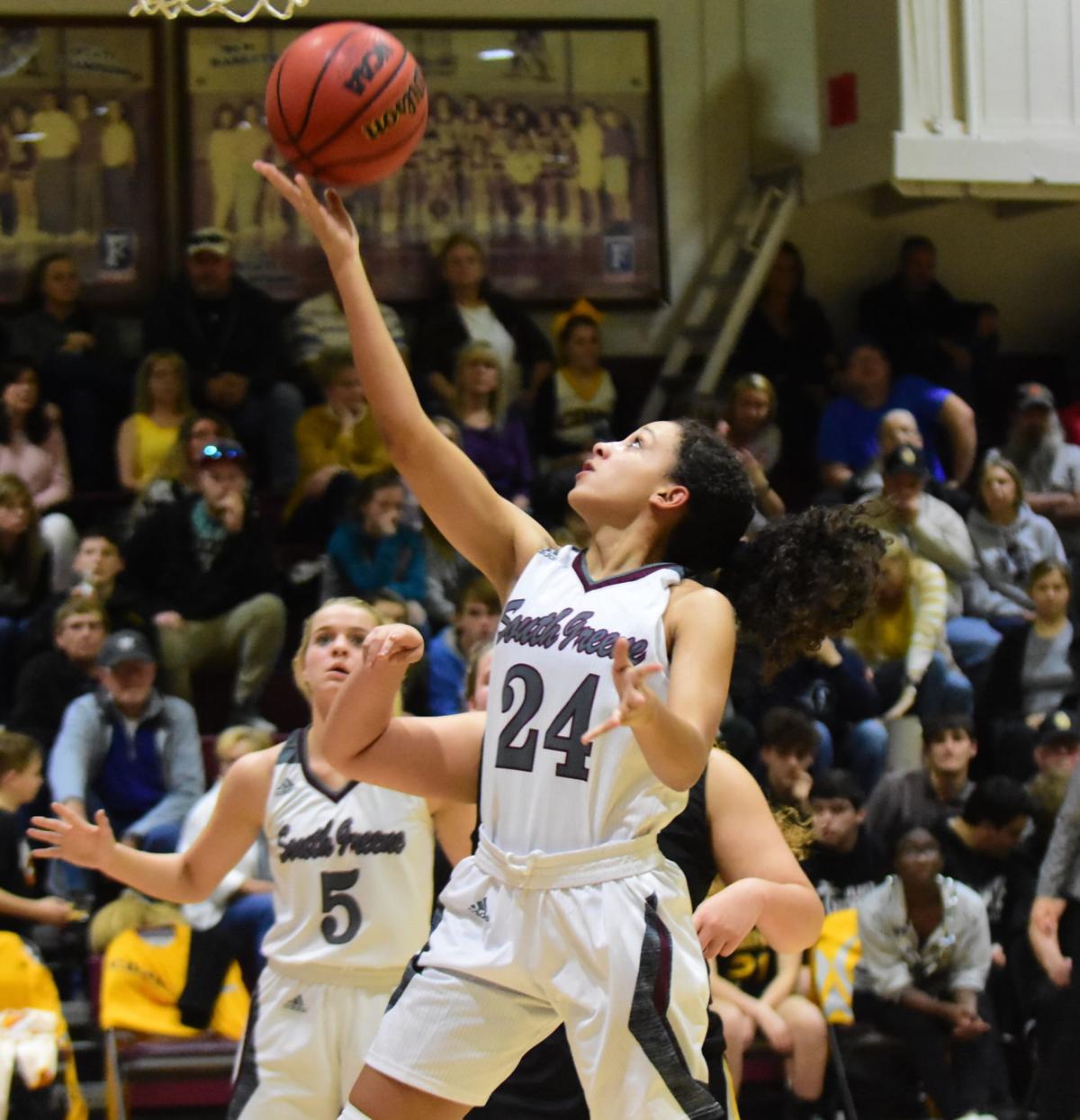 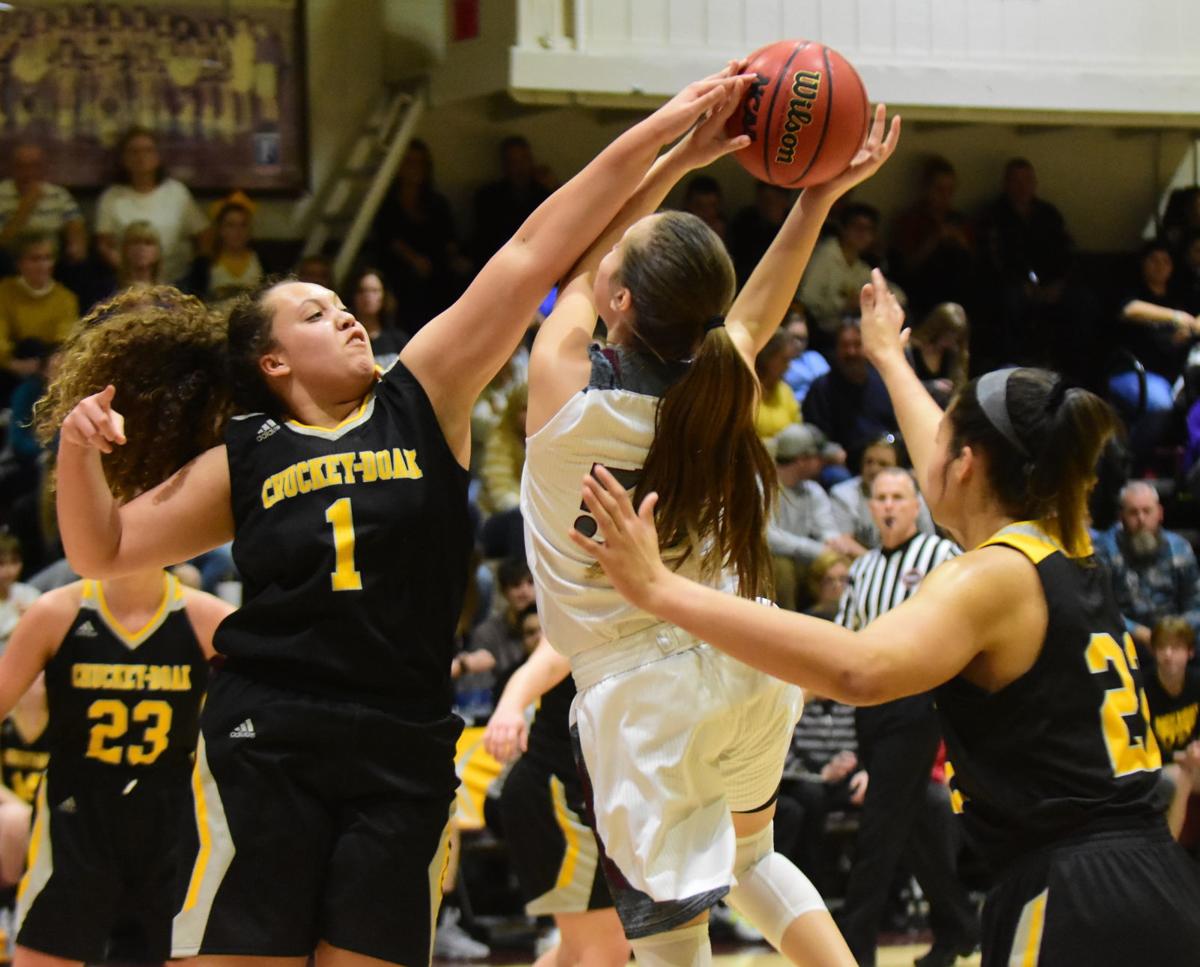 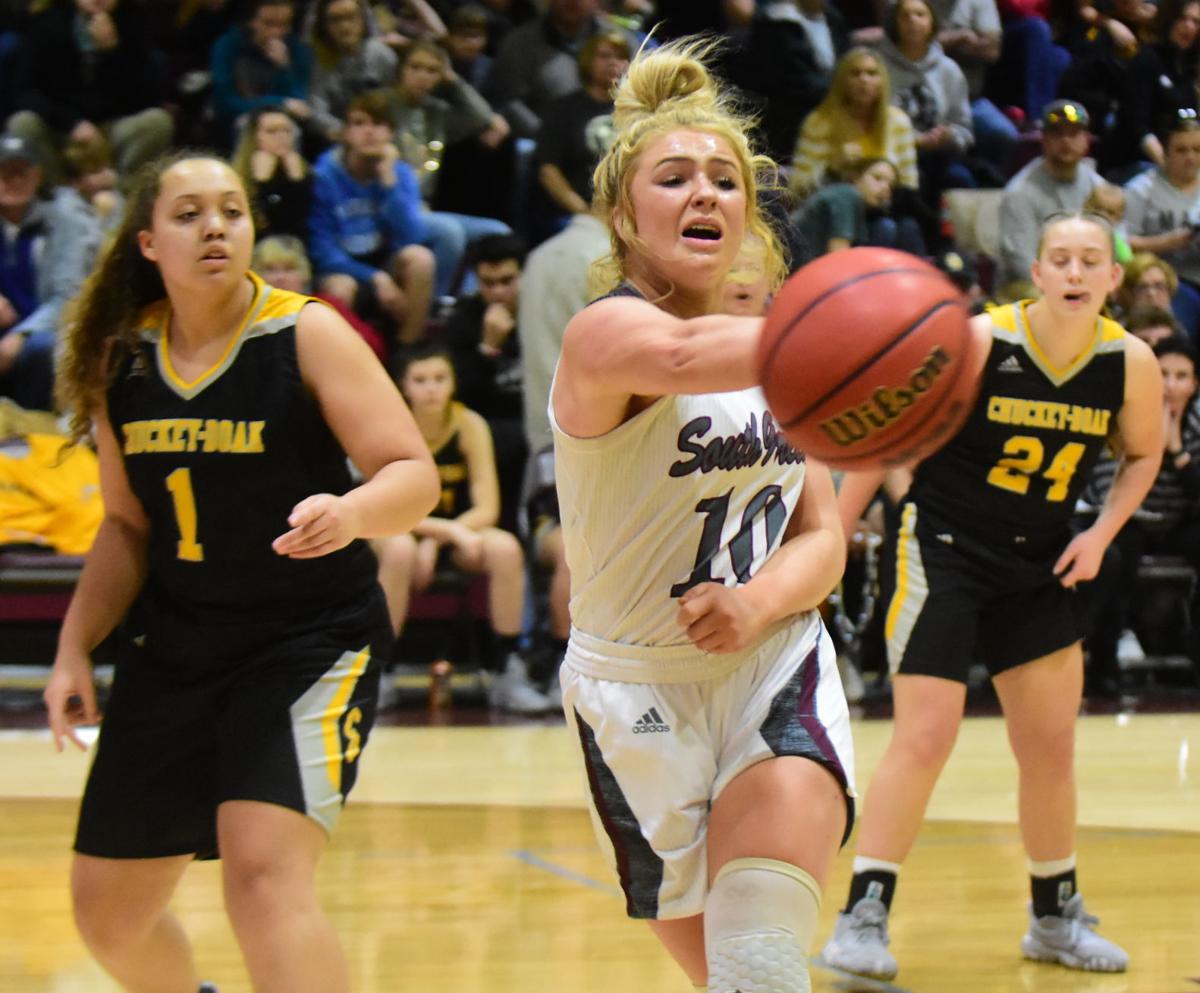 It might have been Valentine’s Day, but there was no love in the air on Rebel Hill on Friday night. That was until South Greene’s entire student body erupted onto the court to embrace Aydan Hawk after he stole a win from Chuckey-Doak.

In a heated game in which both fan bases stayed rowdy for the duration, and both teams stayed physical while exchanging 50 fouls, Hawk sank a mid-range jumper with two seconds left to give the Rebels a 77-75 victory.

“It’s always good to win. Chuckey-Doak played well, and this was a tough game,” South Greene coach Terry Hoese said. “We had four starters on the bench fouled out, but we defended when we needed to and got a couple rebounds when we needed to. Then we had a kid that has missed half the season step up and hit a shot to win the game.”

South Greene played from behind most of the night and by the end had four starters on the bench with five fouls. But a week before the postseason starts, the Rebels’ bench stepped up and found a way to overcome a five-point deficit in the final 39 seconds.

“That’s five (wins) in a row, and heading into the tournament I like our chances,” Hoese said. “We are going to need subs over the next few weeks. It’s good that we have those people. Preston Bailey came in and Jay Higgins came in and played well. Luke Myers came in and got a huge rebound late. Hunter Hartman got us started with a three. It was huge to get those contributions tonight.”

Chuckey-Doak started the fourth quarter leading 57-51, but Levi Myers quickly changed that. He was fouled on a layup and got his own rebound on the missed free throw for a four-point play that made it a one possession game.

Hawk tied the game for the first time 60-60 on a transition layup after Higgins stole the ball at the opposite end.

The lead changed hands four more times until there was 1:05 left and Chuckey-Doak’s Alex Maupin made one at the charity stripe to tie things 70-70.

A technical foul was called between tosses which allowed Maupin to put the Knights in front 71-70.

Then in a 25-second span, the Knights made four more free tosses and held a 75-70 lead.

Then in an 11-second stretch, the Rebels tied the game with one free throw from Bailey and four from Hawk.

Maupin rushed the ball the other direction for Chuckey-Doak and went through traffic going to the rim, but he did not get the foul call despite contact.

South Greene took the ball and Chase Carter held possession for most of the final 15 seconds before he found Hawk, who fired from left of the lane and gave the Rebels the win just before the buzzer.

Hawk, who missed the first half of the season with an arm injury, came up big several times on Friday. He came off of the bench to lead the Rebels with 17 points, 14 in the second half.

“That is the way Aydan can play,” Hoese said. “He has had some spots here and there, but really hasn’t been playing as well as he can since we got him back. It was big for him to step up. He’s a junior and he is going to be one our main guys next year, so it’s good to see him get going.”

Myers finished with 16 points and Sully Fox had 12 before both made early exits.

The night started with Chuckey-Doak taking control early. Tyler Ramsey sank a pair of triples and after Cayden Phillips laid in a full-court pass form Corwin Ramsey the Knights led 16-9.

South Greene was able to claw back and closed the quarter trailing 18-16.

In the second period, the Black Knights stayed in front with Tyler Ramsey continuing his hot streak from the outside with two more treys, while Maupin slashed through the paint for 10 points. At halftime, Chuckey-Doak led 41-36.

Maupin led all scorers with 26 points, Tyler Ramsey had 18, Phillips 14 and Jameson Cobble 10 for Chuckey-Doak.

In the third quarter, the teams exchanged baskets, but the lead stayed in the Knights’ favor the whole way.

Hawk hit a pair of 3-pointers and each closed the gap to three points, but each time the Knights had an answer.

South Greene started with what was likely its worst stretch of offense of the season, but the Lady Rebels came to life in the second half.

After taking more than seven minutes to find the bottom of the net for the first time, the Lady Rebels averaged 24 points a quarter over the final three periods.

“This was a crazy game from start to finish,” South Greene coach Stephen Gregg said. “The girls did not shoot very well tonight and I think it affected their effort in the first half. The biggest thing is we were able to adjust our press at halftime and I think that got us going on both ends.”

Almost nothing went right for the Lady Rebels in the opening period. After bricking every shot they put in the air, they found themselves trailing 11-0 with less than a minute to go in the quarter.

At the same time, Chuckey-Doak’s offense got off to a slow start, but Sierra Allen broke through with a fastbreak layup at the 4:25 mark for a 2-0 lead.

The Lady Knights then sent the ball inside to Earendia Davis for much of the remainder of the quarter and she put in seven of their 11 points.

South Greene’s game-opening scoring drought lasted 7:12 before Kiley Collins knocked down a 3-pointer from the left wing to send the game to the second quarter with Chuckey-Doak leading 11-3.

The Lady Rebels seemed to figure some things out at the break between the quarters and started the second quarter on a 10-1 run to take a 13-12 lead.

Braylee Woods got the period started with a triple. Jayden Merriweather made it a one-point game with a steal in the back court that turned into a layup. Merriweather then gave South Greene a 13-12 lead by making two at the charity stripe.

Gabby Carter briefly regained the lead for the Lady Knights with a jumper from the elbow, but then South Greene scored the final six points of the half for a 19-14 lead at intermission.

The Lady Rebels showed new life in third quarter and outscored Chuckey-Doak 25-9 in the period.

The Lady Rebels started the period on a 16-3 run in which Collins scored eight, mostly by swiping the ball from the Lady Knights and going the other way with it. Merriweather scored five points in the stretch.

Sierra Jaynes broke the run with a triple for Chuckey-Doak, but then the Lady Rebels went on a 9-0 run to take a 44-20 lead.

Merriweather decided to use the fourth quarter to put on a shooting clinic for the capacity crowd on hand at Rebel Hill. She hit from behind the arc four times in the period and scored 15 of her game-high 26 points in the period.

South Greene also got 3-pointers from Collins and Haley Susong in the period.