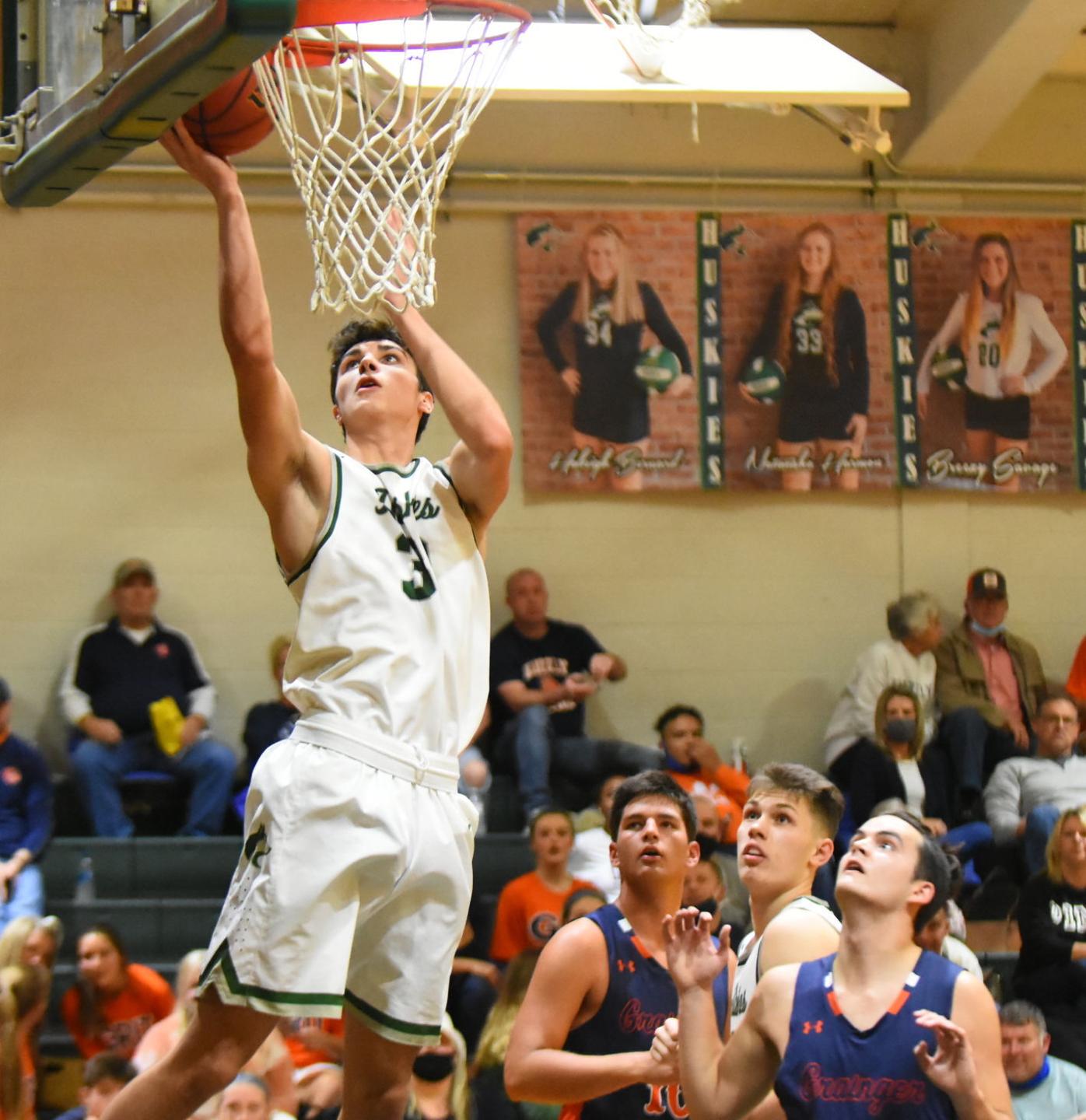 North Greene’s Kendall Loftis goes up for a layup against Grainger on Thursday. 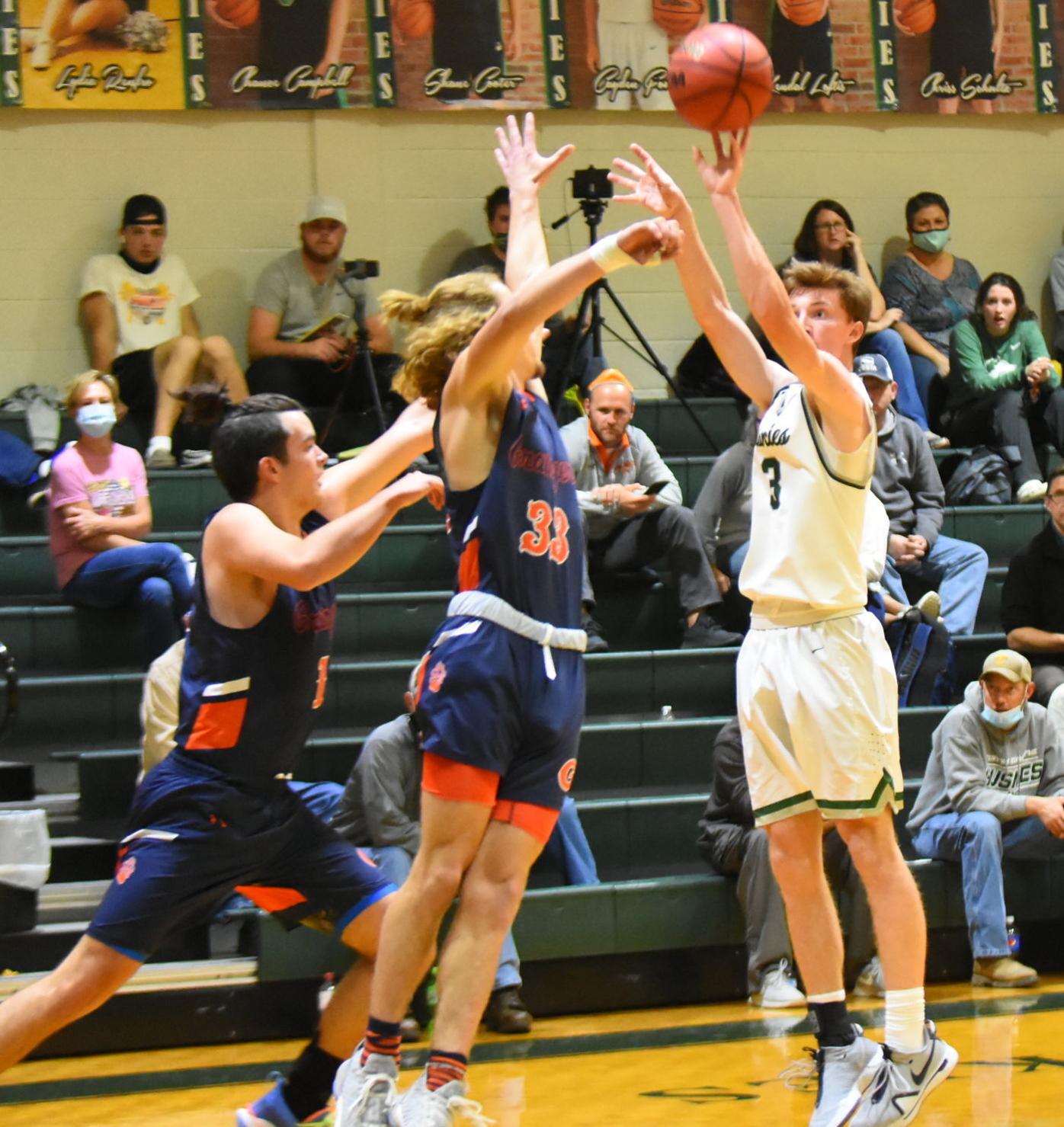 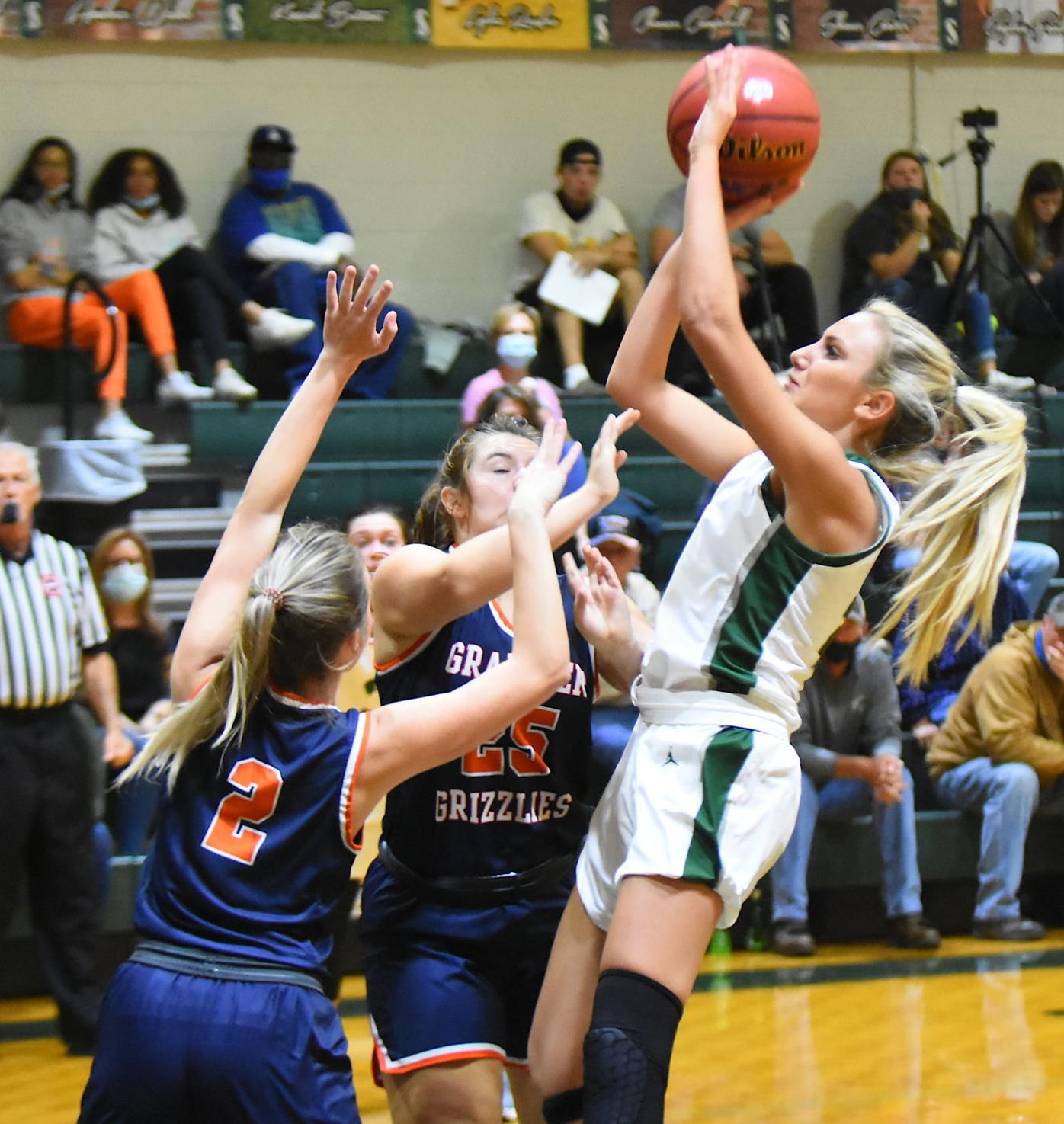 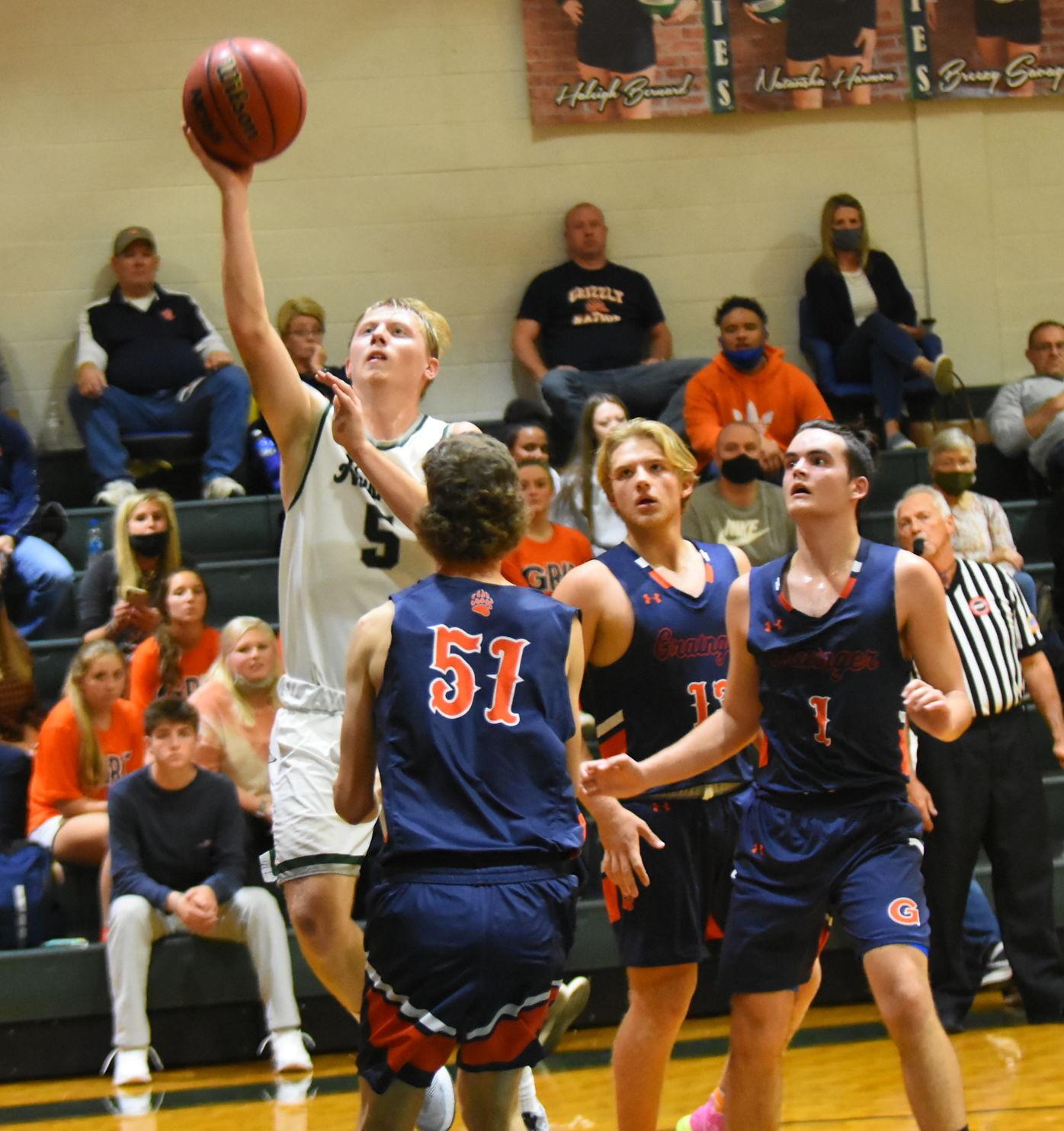 North Greene’s Chance Campbell (5) drives to the basket on Thursday as Reece Jones (51) of Grainger defends.

North Greene’s Kendall Loftis goes up for a layup against Grainger on Thursday.

North Greene’s Chance Campbell (5) drives to the basket on Thursday as Reece Jones (51) of Grainger defends.

The North Greene boys played from behind most of the night, but late in the game they got tougher, started sinking shots and came away with a hard-fought overtime win over Grainger on Thursday.

The Huskies were in front for a total of 11 seconds in the second and third quarters, but they found a way to make the most plays late on the way to a 79-70 win.

“We knew going into the game that this was going to be a physical game,” North Greene coach Sam Tarlton said. “We had to bring it tonight, we had to have guys step up. It’s early and execution wise we were not where we need to be, but I liked the mentality I saw tonight. We got punched in the mouth in the first half, but we threw the punches in the second half.”

The fourth quarter started with Grainger leading 45-44, but a triple by Cayden Foulks on the first possession changed that. Foulks followed with another straight-away trey to give the Huskies a 50-47 advantage.

Chriss Schultz drove the lane with 4:32 left in regulation to tie things 55-55 before Chance Campbell hit from deep to put North Greene on top 60-58 with 3:32 left.

Grainger led for the last time 61-60 when Jaxon Williams knocked one down from behind the arc with 3:23 left in the fourth quarter.

A baseline dunk by Kendall Loftis gave the Huskies a 62-61 lead, and the fourth quarter ended with the game knotted 64-64 after both teams lost final shot opportunities because of traveling violations.

Grainger briefly led 67-66 after a three-point play by Williams, but Loftis tied things on the trip the other way with a charity toss.

With 2:06 left in the overtime period, Campbell regained the lead for North Greene by slashing to the rim for two points.

Schultz then put the Huskies up 72-67 when he was fouled on a finger roll, and made good on his free toss with 1:45 remaining.

From there North Greene was able to keep it a two possession game.

“That is how we should be,” Tarlton said. “The toughest teams to defend are the teams that have four or five scorers. I think we have that. We share it well, and we have to continue that. We could have a different leading scorer every night. There in the second half when it became closing time Kendall and Chriss got tough inside, and we need that.”

In the first quarter, Grainger used triples from Brody Grubb and Emmanuel Atkins on the way to a 10-4 lead.

North Greene answered with Foulks, Campbell and Schultz all hitting from deep to swing the Huskies in front 13-10 before the quarter closed with Grainger leading 17-16.

In the second quarter, the shots stopped falling for the Huskies and they struggled to get into the lane against the bigger Grizzlies. As a result Grainger was able to pull out to a 30-25 lead.

After back-to-back buckets off offensive rebounds by Reece Jones the Grizzlies led 34-25.

Loftis closed the first half with a three-point-play that closed the gap to 34-28.

Just over a minute into the second half, Foulks made it a one-point game when good ball rotation gave him an open look for 3 at the top of the key.

Grainger was able to pull back out to a 42-35 lead when Atkins made a corner trey.

Schultz knotted things for the first time in 13 minutes of game play when he put back a miss that made it 42-42 with 1:13 left in the third quarter.

North Greene started the day with a 77-40 win over Cedar View Christian.

The North Greene girls wanted to be challenged early in the year, and they certainly got that on Thursday from Grainger, which has been in the Class 2A state tournament the past two seasons.

What the Lady Huskies would have liked is a better result as the Lady Grizzlies outran them.

“We have not done a very good job in practice getting ready to defend,” North Greene coach James Buchanan said. “We have always tried to emphasize that if we are going to be good, we are going to be good defensively. I thought in the second half our effort looked bad. It wasn’t a total wasted tonight, but it’s disappointing. I think it was an eye opener, and hopefully we saw that if the defense and effort isn’t there we’ll get run out of our own gym.”

The Lady Grizzlies started the day with a pressing and trapping defense that got North Greene out of its rhythm as it fell behind 8-0. Alia Mabney started the run with a 3-pointer and Tori Rutherford finished it with a steal she took the other way for an easy layup.

Emily Britton finally got North Greene on the board with a press break layup over three minutes into the contest.

Shelby Davenport scored six points over final two minutes of the first period to close the gap to 17-13.

Grainger started the second quarter on a 10-1 run with Sydnie Hayes and Rutherford both scoring three points.

With 2:45 left in the first half, Audrey Stratton hit a transition triple to give the lady Grizzlies a 32-16 advantage.

The Lady Huskies finished the half with 10 points from five players to cut Grainger’s lead to 35-26 at intermission.

North Greene picked up its scoring pace in the fourth quarter, but could not slow down the Lady Grizzlies as the margin continued to grow.

Davenport scored eight points in the fourth quarter and finished with 16 to lead North Greene.

Rutherford scored 19 points for Grainger while Mabney put in 12.

North Greene did start the day with a 58-39 win over Cedar View Christian.