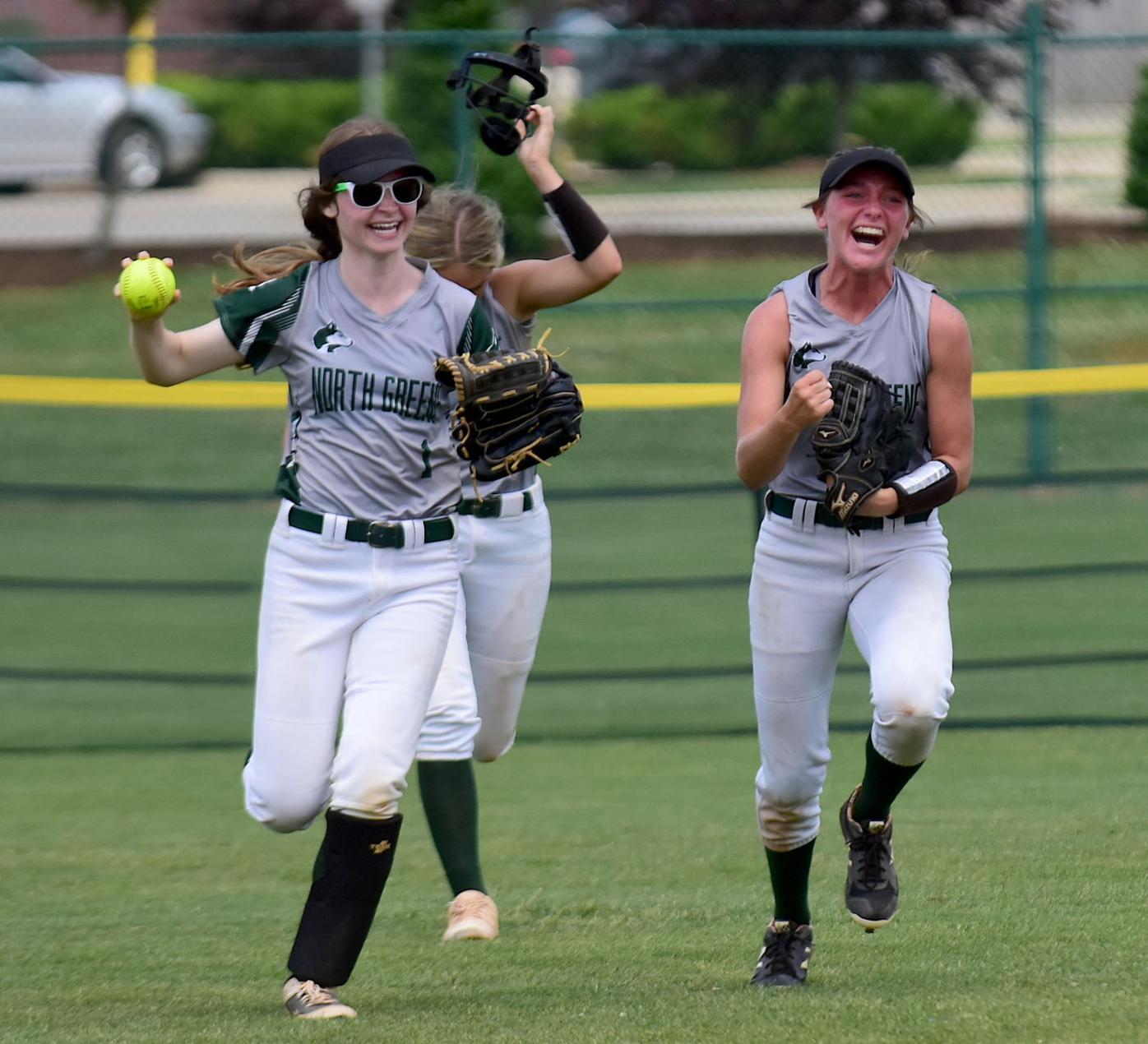 North Greene’s Eliza Brown (left), Zoe Sanders and Breezy Savage (right) run off of the field after making the final out against Sale Creek on Thursday. 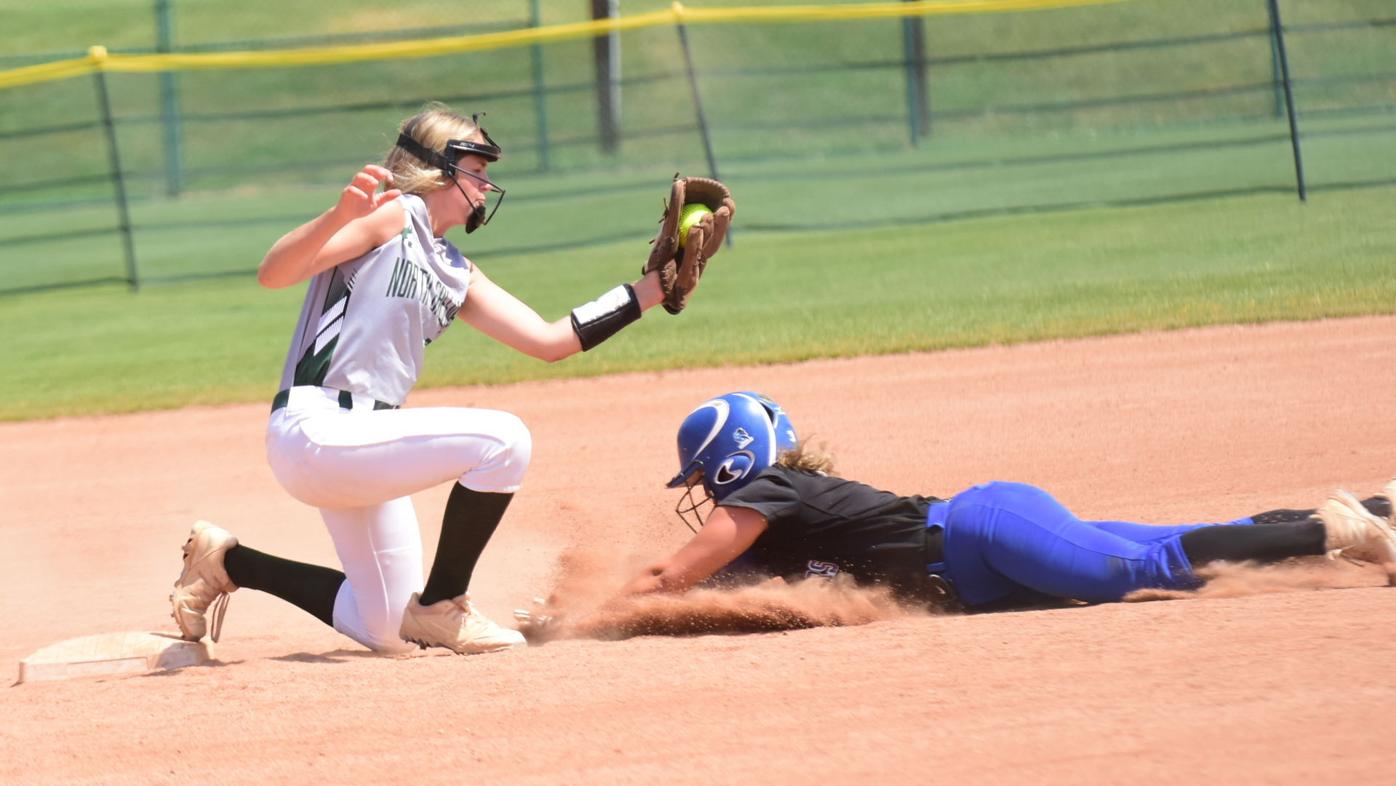 North Greene’s Zoe Sanders (left) prepares to put a tag on Sale Creek’s Alison Smith on Thursday in the Class A state tournament. 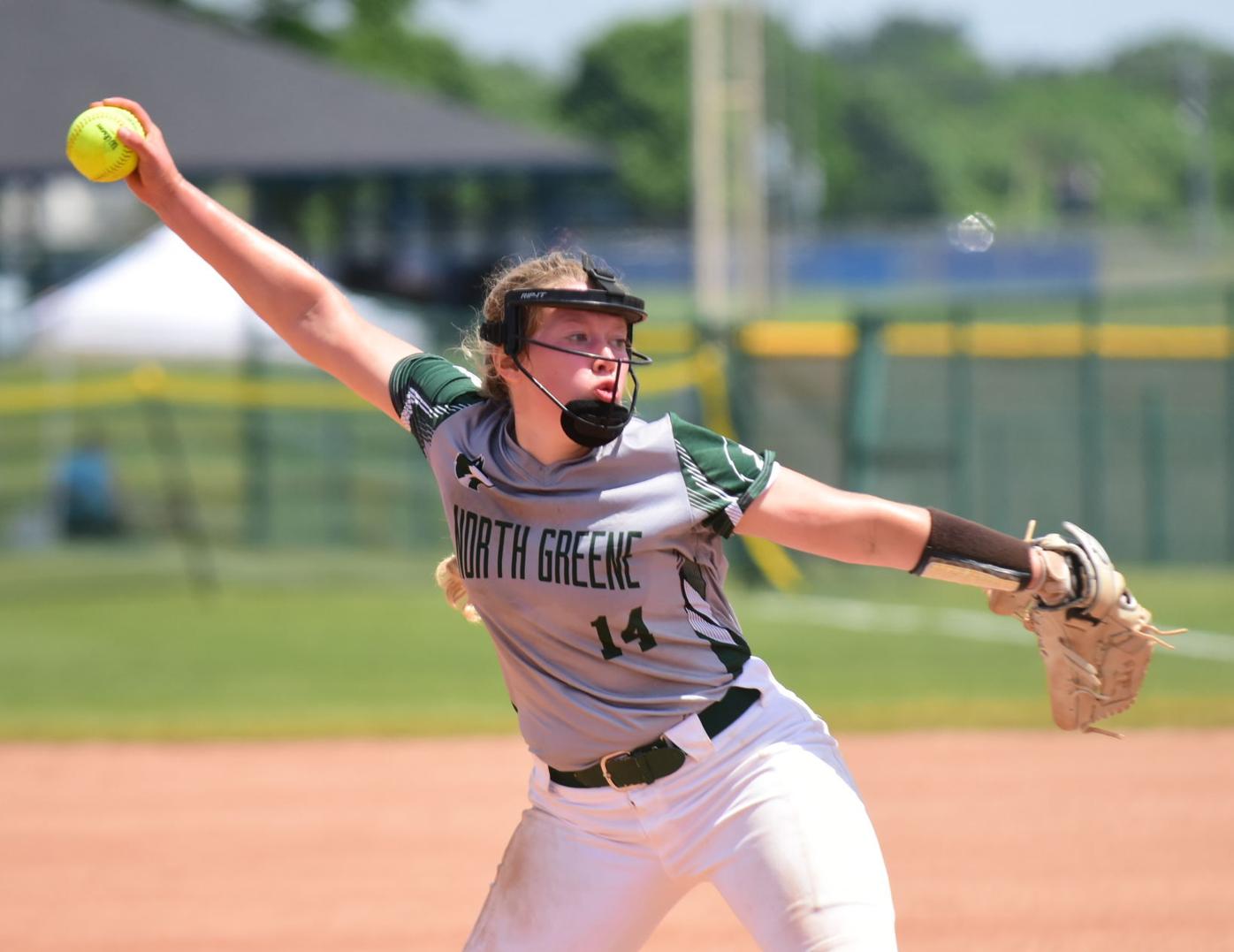 North Greene’s Cambell Gaby delivers a pitch against Sale Creek on Thursday in the Class A state tournament. 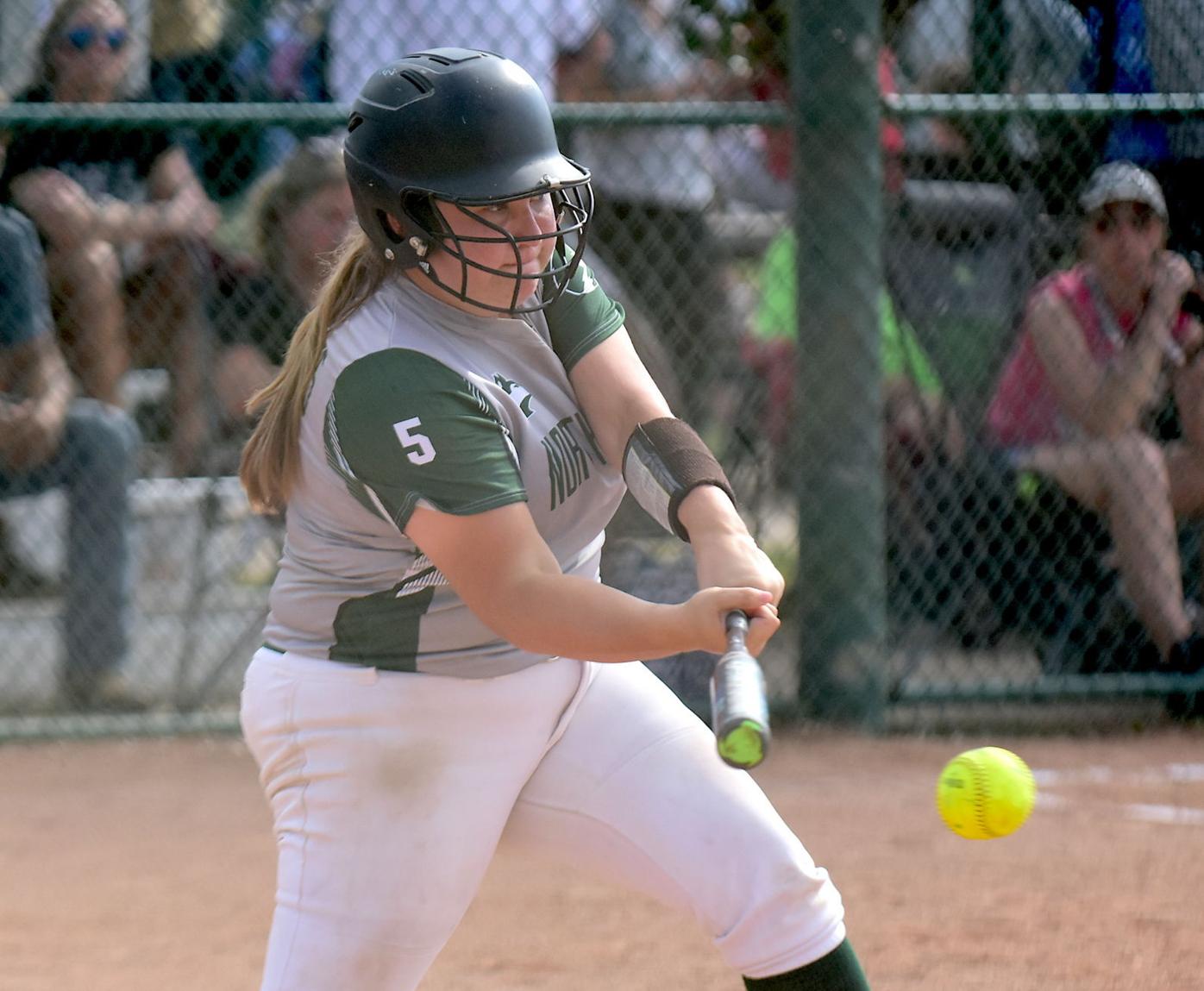 North Greene’s Kylee Jones takes a swing on Thursday against Eagleville in the Class A state tournament.

North Greene’s Eliza Brown (left), Zoe Sanders and Breezy Savage (right) run off of the field after making the final out against Sale Creek on Thursday.

North Greene’s Zoe Sanders (left) prepares to put a tag on Sale Creek’s Alison Smith on Thursday in the Class A state tournament.

North Greene’s Cambell Gaby delivers a pitch against Sale Creek on Thursday in the Class A state tournament.

North Greene’s Kylee Jones takes a swing on Thursday against Eagleville in the Class A state tournament.

MURFREESBORO — The North Greene softball team did something no other team in program history ever had on Thursday morning, but in the afternoon the Lady Huskies’ historic run came to an end.

The day finish with North Greene falling to Eagleville 5-0 for a fourth-place finish in the state tournament.

“This has been a good season for these girls. Fourth in the state is certainly an achievement,” North Greene coach Danny Weems said. “Getting to the state tournament was one of our goals at the beginning of the year. Winning two games down here made this a special season for us.”

Two other North Greene teams have finished in the top four. In both 1979 and 1980, North Greene made what was at the time a four-team field in the state tournament. In 1979, the Lady Huskies won their semifinal game over Boyd Buchanan to advance to the championship series. That team from 42 years ago is the only team in program history to advance further than the 2021 Lady Huskies.

North Greene had to battle on Thursday morning after falling behind 4-0, but it got hits throughout the lineup while Cambell Gaby was tough on the rubber.

“This was a good win for us, we got down four runs but the girls stayed the course,” Weems said. “It was really good to see the girls keep battling. We could have laid down when things were not going our way, but the girls fought their way back into the game.”

Gaby Struck out 14 while walking two and allowing eight hits. She sat down the side in order three times, and twice earned three strikeouts in an inning.

“Cambell locates the ball so well,” Weems said. “This team was swinging at high pitches. She did a good job of locating the ball at the top of the strike zone and even getting them to swing out of the strike zone. She was really good.”

The contest started with North Greene committing an error that allowed Alison Smith to reach base safely. She stole second and then scored when Alexis Raines dropped a fly ball into shallow left field. Another hit by Shelby Sullivan put Raines on third, but she stayed there as Gaby buckled down and struck out the next three batters, twice on three pitches.

In the third inning, North Greene found itself in a 4-0 hole after Alyssa Raines launched a three-run home run well beyond the center-field fence.

North Greene got its rally started in the fourth inning, and Gaby helped her cause by leading off the side with a line drive over the shortstop. Haley Bailey followed by skipping a ground ball past the third baseman and Kylee Jones pushed across the first run when she punched another ground ball though the left side.

Eliza Brown put down a bunt single to load the bases before Breezy Savage got hit by a pitch to close the gap to 4-2.

With two out, Anna Weems rifled a two-RBI double into left field to tie things 4-4.

North Greene found three more runs in the fifth inning. Savage got things going with two out when she put a double into left field to score Jones.

Haley Kirkpatrick then hit a towering pop fly that was dropped by the second baseman. Savage and Brown, who were on base and never stopped running, both scored on the play.

North Greene earned 11 hits. Weems was 3-for-4 with two doubles. Bailey went 3-for-3 and Gaby went 2-for-4. The final five batters in North Greene’s lineup earned eight of the 11 hits.

“It seems like it is a different person or group of persons that lead us every game,” Weems said. “We don’t have those three or four players that constantly lead us, but we have several different girls that can step up.”

North Greene’s season came to an end on Thursday afternoon at the hands of Eagleville.

“This afternoon we didn’t get the job done, but we have had a good run here,” Weems said. “I’m certainly not disappointed in the girls. They gave it all they had. We just ran into a very good pitcher and couldn’t score runs.”

Linton started the day by striking out the side, and then the Lady Eagles’ bats got going. Emma Martin led off the bottom of the first inning with a solo home run to right field.

Ryli Renfroe followed with a solo blast to left field for a 2-0 lead.

The lead stretched to 4-0 in the third inning. Martin led off by bouncing a line drive off the right-field fence for an inside the park home run.

Linton followed with a line drive to center field and scored when Zoe Ellis skipped a ground ball down the third-base line.

Martin scored again in the fifth inning after leading off the side with a double to right field. She took third on a passed ball and scored when Linton put a line drive back up the middle.

Linton held North Greene to just two hits. She walked one and struck out six, including the first four batters she faced.

Gaby took the loss. She struck out six, walked none and gave up eight hits.